A Great Awakening without Christianity 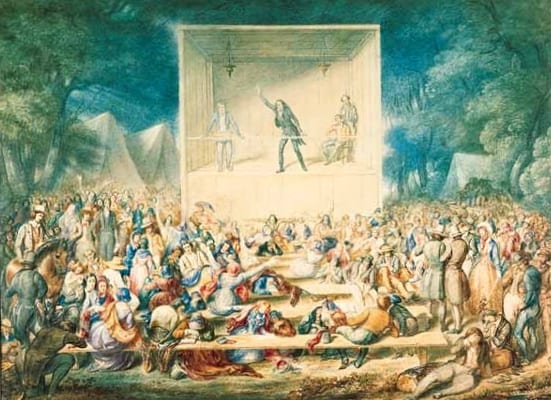 Why have our cultural masters been so dead-set on social distancing, mask wearing, and avoiding crowds to counter COVID-19, only to throw all of that concern away to encourage mass protests of the George Floyd killing?  Because they recognized that dealing with sin is more important than death.

This is a religious insight, though the religion of identity politics is very different from Christianity.  So says Georgetown professor Joshua Mitchell in his essay A Godless Great Awakening in First Things:

Identity politics does not overcome death, as Christianity does, through faith in Christ, so that man may again have eternal life as he did in the Garden of Eden. Identity politics overcomes death by attempting to build an Edenic world protected from death. Augustine wrote that all reasonable beings understandably shrink from death. But that is not what is happening here. Citizens captivated by identity politics quarantine so that they may remain isolated from death until a vaccine arrives that will inoculate them from death. In the interim, they are content to be served by the least among us, service industry workers who cannot quarantine. This is not medical science doing triage in a world where death is always near; it is a religious longing to be saved from death, no matter the collateral damage done to the livelihoods of millions along the way.

Identity politics does not overcome sin, as Christianity does, through Christ, the sacrificial scapegoat who takes upon himself the sins of the world. Identity politics overcomes sin by offering up a mortal scapegoat: the white heterosexual man, who, if sacrificed and purged, will cleanse the world of stain. . . .

When George Floyd was killed, why did so many Americans suddenly strip off their masks, forego quarantine, and take to the streets to call out transgression? Because even though identity politics is a profound distortion of Christianity, it remains true to Christianity’s deepest insight: Sin, not death, is man’s deepest problem. That is why so many adherents of identity politics acted as they did.

What identity politics cannot face, however, is that no amount of “innocence-signaling” undertaken by our educational, corporate, or political leaders will help us address America’s problems. For that, hard work and humility are needed. . . .

Identity politics. . . addresses the curse of death not by looking for divine redemption, but by attempting to construct an Edenic world without death. That is why our debates about quarantines and vaccines are so supercharged. We are not arguing about medical science. We are arguing about whether we can construct an Edenic world, or whether we live in a post-Edenic world where death is ever near.

The zeal, the indignation, the righteousness, the high motivating cause, the sense of meaning it imparts–all of these, again, are externals of religion.  But, again, as we discussed in the Post-Protestant post, it is a case of “holding the form of religion [the outer appearance] but denying the power of it [the living inner Spirit]” (2 Timothy 3:5; RSV).

Still, perhaps it is something to build on.

Prof. Mitchell is associating the COVID-19 shutdown advocates with the Black Lives Matter protests, though I’m not sure they completely overlap.  The Black protesters were, to a large degree, led by ministers of the Black Church, and African-Americans are bigger church goers and Bible believers than any other demographic.  So, whatever theological issues we might find, we can’t dismiss them as not Christian.  And they were largely working class folks who also chafed at the shutdown.  Prof. Mitchell, though, is mainly referring to their White allies, some of whom did call for social distancing while making an explicit exception for the protests.  They do bear the marks of the Post-Protestants.

July 9, 2020 Cancel Margaret Sanger
Recent Comments
0 | Leave a Comment
"I said rational people in my original post. People that refuse vaccinations are not rational. ..."
Alan Drake Our Elective Monarchy
"Stating something as fact without proof is an assertion and you did assert what I ..."
Rev_Aggie_98 Our Elective Monarchy
"People unable to live together in an acceptable level of harmony."
SAL Attaining Reconciliation
"Dude. That's a remarkably thin basis for accusing someone of being "dishonest to your core". ..."
tODD Our Elective Monarchy
Browse Our Archives
get the latest updates from
Cranach
and the Patheos
Evangelical
Channel
POPULAR AT PATHEOS Evangelical
1