The Lutheran Way of Resistance & the American Revolution 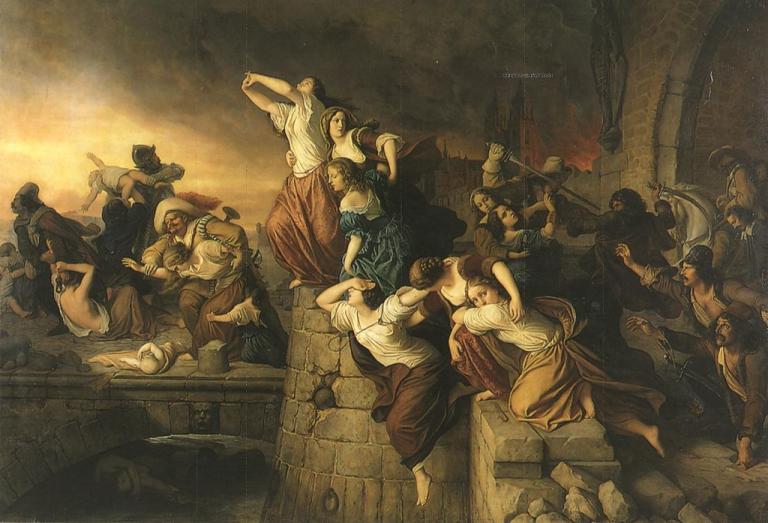 Lutherans are often criticized for submitting to government authority no matter what, which is strange to say of a movement that had its beginnings in a rebellion against the Holy Roman Emperor and the Pope and which was legally established only after the revolution of the Thirty Years War.

But Lutherans do take Romans 13, along with the rest of the Bible, seriously, and there developed a Lutheran theology of resistance to unjust governments formulated in the Magdeburg Confession  of 1550.

John Kleinig sent me a 2001 article by the Baylor Reformation scholar David M. Whitford entitled “John Adams, John Ponet, and a Lutheran Influence on the American Revolution,” in Lutheran Quarterly, 15 (2001): 143-157.  (Not available online except through a library’s ATLAS or EBSCO account.)

Whitford points out that John Adams, who was involved with the drafting of the Declaration of Independence and with promoting the American Revolution arguably more than Jefferson, says that his influence was not Jefferson’s John Locke but John Ponet.  He was a Protestant English bishop who fled the Catholic persecutions of Mary Tudor (a.k.a. “Bloody Mary”) and lived in exile in Strasbourg, then a Lutheran city in present-day France.  Here Ponet interacted with Lutheran divines and became acquainted with the Magdeburg Confession, which served as the basis for his own  Short Treatise on Political Power.

This book was well-read in the American colonies.  According to Whitford, “Adams did not subscribe to or even greatly appreciate the theories expounded in Locke’s Two Treatises. Instead, John Adams looked to John Ponet as his source for the justification of revolution. He wrote that Ponet’s Short Treatise “contains all the essential principles of liberty, which were afterwards dilated on by Sidney and Locke.”

Thus, according to Whitford, a specifically Lutheran influence played a role in the American revolution and the American founding.  So what did the Magdeburg Confession say on the subject?

Basically, the Magdeburg Confession taught that resistance to tyranny is a moral necessity.  But that resistance must be carried out in an orderly manner and under a rule of law, unlike the chaotic uprisings of the Peasant Revolt and the French and Russian Revolutions.

Magdeburg was a German city that resisted the Augsburg Interim, a reversal of the Reformation that was imposed by the Catholic emperor after defeating the Lutheran princes.  (I’ll tell you the rest of the story later.)

I can’t find an English translation of the Magdeburg Confession online–it was in Latin–though one is available on Amazon.  (And see this website on the document.)  So I’ll let Prof. Whitford, who published an entire book on this topic for CPH, explain its principles:

In defining the fundamental issue confronting them, the pastors outline the arguments that they will expand in the body of the work in order to support their contention that resistance to the Interim is just and necessary. They are: i) Positive Law’s precedent for and authorization of resistance, 2) a Natural Law requirement that the resistance be defensive in nature, and 3) that the resistance be led by lesser magistrates and that it therefore be ordered and legal.

The importance of a precedent for resistance within Positive Law is an essential ingredient in Lutheran theories of resistance because it provides a constitutional mechanism for resistance thereby ensuring that resistance will be ordered and not chaotic. The theory argued that the emperor could be resisted because he did not rule the empire alone. The electors and great-lords share with the emperor the just administration of the realm. This sharing of power implies a sharing of responsibility. Just as the emperor must admonish and punish a tyrannical noble, so too the electors and lesser-nobility must admonish and punish a tyrannical emperor. This constitutional solution, based on the precedent of Emperor Wenceslaus’s removal from office in 1400, also provided the important aspect of orderliness to the resistance. Lutheran theories of resistance insisted that resistance could not be rebellion. By stipulating that the electors and nobility lead the resistance they ensured that resistance would not collapse into chaotic social disorder, as in the Peasants’ War.

But what about Romans 13, which requires submission to the governing authorities?

Generally, Romans 13 proved to be a stumbling block to resistance. In Romans, Paul states in unambiguous terms that resistance to authority is resistance against God.  However, by usurping power that does not rightfully belong to them but to God, tyrants cease to be ordained by God and therefore may justly be resisted. The rationale for this reframing is found in Matthew 22:21 (Give therefore to the emperor the things that are the emperor’s, and to God the things that are God’s.). The pastors assert that this command in Matthew also implies that “Christ does not wish the emperor to be given what is God’s.”  The tyrant by demanding practices that are, in their opinion, an “inducement to sin” requires that which does not belong to his mandate as emperor and must therefore be set aside and resisted. This reframing may seem natural and even a bit pedestrian now but in 1550 when it was set forth in the Magdeburg Confession it was revolutionary.

The Magdeburg Confession originated the doctrine of the “Lesser Magistrates.”

The second major aspect of the Magdeburg Confessions argument is the requirement, consistent within all of Lutheran resistance theory, that the resistance be defensive in nature. They begin by asserting that it is the emperor and his allies who disturb the peace, not the citizens of Magdeburg. Throughout the treatise they argue that they are upright and honest subjects of the empire. They have not done anything illegal or immoral. To support their assertion that the emperor is the disturber of the peace and to characterize their resistance as defensive in nature, they demonstrate that their beliefs represent true Christian doctrine through “powerful arguments from the Word of God.” On the other hand, they argue that the Augsburg Confutation which the emperor seeks to enforce was written “unskillfully and without any basis in God’s Word.” The pope’s theologians had not then refuted the Augsburg Confession from God’s Word; instead they now seek to overthrow it by force.

Thus, the American colonies were rebelling against the British King and Parliament.  But they did so through the “lesser magistrates” of the Continental Congress, the colonial legislatures, and local authorities.  The people did not just run amok destroying things, as they did in France, Russia, and–we might add–today’s antifa protests.  The duly elected Continental Congress voted on whether to declare independence, and when they did, the rule of law continued to prevail.

Yes, the doctrine of the lesser magistrates, as developed by Ponet, was also invoked by the Confederate States to justify their secession from the Union.  But the concept remains a powerful one.  To be sure, its effect is conservative.  People suffering under a tyrannical regime may not have local magistrates on their side.  They seem to in Hong Kong.  Should the Lutherans in Germany have invoked Magdeburg to resist Hitler?  Doubtless, though, again, they lacked local magistrates who would lead them, however some of the anti-Hitler Germans were led by elements of the old aristocratic system and by military officers, thus retaining a sense of authority.  But Hitler’s rule was surely lawless–he dismissed the legislature to rule by decree, and in his murders and other cruelties he continually ran roughshod over German law–and idolatrous.  Magdeburg had much to say about those things too.

What happened to the city of Magdeburg?  Five months after issuing the Confession, the city was besieged by Elector Maurice of Saxony, a former Lutheran who betrayed the Protestant cause and joined the Emperor.  Soon after, though, Maurice reverted back to Lutheranism and defeated the Emperor, leading to the Peace of Augsburg in 1555 and the legalization of Lutheranism.

Illustration:  “The Sack of Magdeburg” (1866) by Eduard Steinbrück / Public domain via Wikimedia Commons

August 5, 2020 Civil Rights as the Fulfillment of the American Founding
Recent Comments
0 | Leave a Comment
Browse Our Archives
get the latest from
Cranach
Sign up for our newsletter
POPULAR AT PATHEOS Evangelical
1