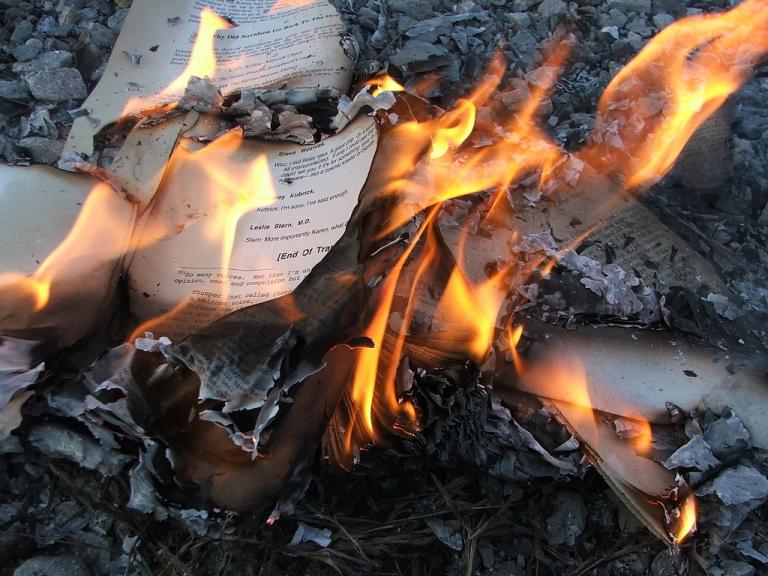 Book burning is the iconic manifestation of totalitarianism, thought control, and the suppression of freedom.  And now cancel culture has come to point of burning books.

Trans Rights Activists have called for the burning of books by J. K. Rowling, the author of the Harry Potter series.  Newsweek reports that  “J.K. Rowling Book Burning Videos Are Spreading Like Wildfire Across TikTok.”  Former Harry Potter fans are burning their books out of allegiance to the transgender ideology, since Rowling has said that men dressed up as women are not, in fact, women.

Right now, book burnings are being carried out by young totalitarians–though that most-burned-of-all books, the Bible, was set on fire during the Portland riots–but adults, such as book store owners who refuse to stock Rowling’s books, are cancelling literature in other ways.

One target is Flannery O’Connor, hailed as one of America’s best fiction writers in the 20th century and a devout Catholic Christian who writes explicitly about sin, grace, and Christ throughout her work.  A recent article in the New Yorker entitled How Racist Was Flannery O’Connor  brought up letters the Georgia native wrote when she was a teen-ager visiting New York City that expressed her surprise to see black people mingling with whites on the subway.  As an adult, O’Connor, who died the year the 1964 Civil Rights Act was passed, wrote in another letter that while she supported integration, she still felt uncomfortable around black people.  Also, some of the characters in her stories and novels sometimes use the N-word.  (For a full account of the controversy and a defense of O’Connor, read Charlotte Allen, Flannery O’Connor and the Ideological War on Literature.)

For this, she is being removed from college reading lists, her name has been removed from a building at Loyola, and her literary stature is being “reconsidered.”  Some readers, scholars, and writers–including the prominent black novelist Alice Walker, who actually grew up down the road from the O’Connors’ farm and knew the family–have risen to her defense.  But a charge of racism is a death sentence in the current literary scene.

This charge is also being leveled at other white Southern writers who lived during the segregation era, including one of the greatest novelists in American literature, William Faulkner, who is recorded saying that he supported separation of the races.

Other American classics have already been largely canceled for their depictions of race.  Perhaps the greatest American novel, Huckleberry Finn by Mark Twain, has been censored and expelled from the curriculum because its characters use the N-word and because the author reproduces black dialects.  And the novel that ignited public opinion against slavery–to the point that Lincoln referred to its author, Harriett Beecher Stowe as “the little woman who wrote the book that started this great war”–Uncle Tom’s Cabin may no longer be read because its main character is, well, an “Uncle Tom,” an overly submissive black man.

Which brings up the irony:  Each of these writers now being censored and vilified for their alleged racism–Stowe, Twain, Faulkner, and O’Connor–wrote works that undermined racism, that dissected and condemned the racism in their societies, and that played a major role in changing the attitudes that they themselves grew up with.

They did so by humanizing black people, who had been reduced to objects to be bought and sold in slavery (Stowe’s original sub-title for Uncle Tom’s Cabin was “The Man That Was A Thing“) and to be restricted and controlled in the Jim Crow era.

In the current climate, the actual effect of a book is less important than what some critics openly call, using KGB terminology, the political “interrogation” of the author.  Note too the reductionism.  A failure to measure up to today’s standards is allowed to trump all other considerations–the quality of the writing, the work’s aesthetic impact and artistic merit, what the author has to say about other issues.

In his essay “On the Reading of Old Books,” C. S. Lewis observed that every age has its blind spots.  Reading works from the past can not only make us aware of mistakes from the past, it can also make us realize that we have blind spots of our own.

Every age has its own outlook. It is specially good at seeing certain truths and specially liable to make certain mistakes. We all, therefore, need the books that will correct the characteristic mistakes of our own period. And that means the old books. . . .Not, of course, that there is any magic about the past. People were no cleverer then than they are now; they made as many mistakes as we. But not the same mistakes. They will not flatter us in the errors we are already committing; and their own errors, being now open and palpable, will not endanger us.

That writers of the past will have blind spots does not mean they should be canceled.  But the impulse to do so is certainly a blind spot of our own time.

And it is an especially dangerous one.  “Where they burn books, so too will they in the end burn human beings.” So said the German poet Heinrich Heine in 1821, a prescient comment that anticipated his countrymen who would burn both in the 20th century.  The Wikipedia article on Book Burning called it a means of “cultural genocide.”  And, of course, that is the motive of many of today’s ideological censors, to erase a culture that they find oppressive.

The definitive treatment of book burning is Ray Bradbury’s novel Fahrenheit 451, so named because that is the temperature at which paper burns.  The dystopian novel about a society in which firemen set fires–of forbidden texts–instead of putting them out dramatizes the effect of this mindset and its goal of extinguishing civilization.  In our day of books as digital files, we don’t have to burn them, just hit “delete.”

Bradbury said that he wrote his novel in 1953 to protest the excesses of the anti-communist McCarthy era, but in 1994 he said that it is even more relevant today:  “It works even better because we have political correctness now. Political correctness is the real enemy these days. The black groups want to control our thinking and you can’t say certain things. The homosexual groups don’t want you to criticize them. It’s thought control and freedom of speech control.”  Watch for Bradbury to get canceled for saying that and for Fahrenheit 451 to get, literally or figuratively, burned.

Photo by LearningLark / CC BY (https://creativecommons.org/licenses/by/2.0) via Wikimedia Commons

September 23, 2020
Becoming a Christian Dissident against Soft Totalitarianism
Next Post

September 25, 2020 Count von Zinzendorf Did Not Lead a Vampire Sex Cult
Recent Comments
0 | Leave a Comment
"Unrelated ? Hardly !!For many rational people, by far their greatest exposure to SARS-CoV-2 virus ..."
Alan Drake Our Elective Monarchy
"Biden's Chief of Staff retweet sure appears to confirm suspicions that the use of OSHA ..."
Romanus Our Elective Monarchy
"Talk about false framing. A disease that is unrelated to the workplace is not a ..."
Rev_Aggie_98 Our Elective Monarchy
"Most of the autocratic governors are acting on the basis of broadly written (or interpreted) ..."
DonS Our Elective Monarchy
Browse Our Archives
get the latest updates from
Cranach
and the Patheos
Evangelical
Channel
POPULAR AT PATHEOS Evangelical
1

A Text without a Context is a Pretext...
The problem is that  this verse should be translated 'I can endure...
view all Evangelical blogs
What Are Your Thoughts?leave a comment
Copyright 2008-2021, Patheos. All rights reserved.