On the Pope’s Endorsement of Same-Sex Civil Unions 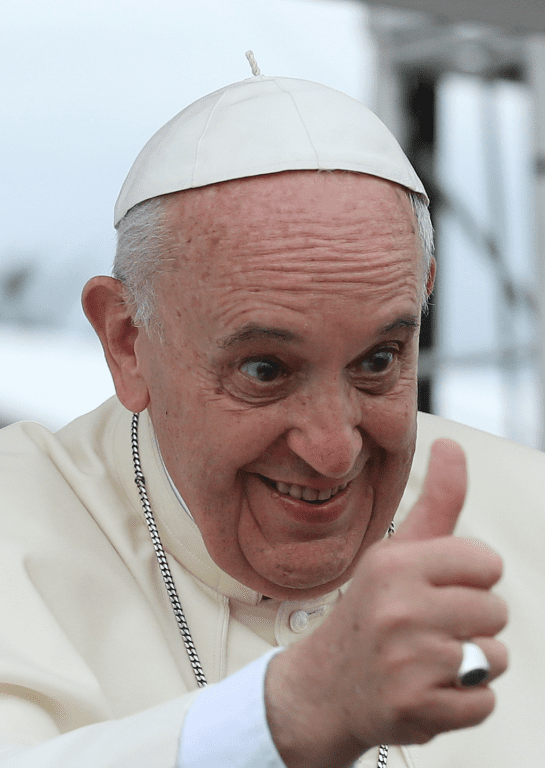 Pope Francis is being quoted as endorsing same-sex civil unions.  Though this stops short of advocating same-sex sacramental marriages, this would amount to a seismic shift in Catholic moral teachings.

In a recently released documentary about Pope Francis entitled Francesco by the Russian-American filmmaker Evgeny Afineevsky, the pontiff says this:

“Homosexuals have a right to be a part of the family. They’re children of God and have a right to a family. Nobody should be thrown out, or be made miserable because of it. . . .What we have to create is a civil union law. That way they are legally covered.”

To be sure, such an off-the-cuff statement–like a number of other controversial statements Pope Francis has made to journalists–does not constitute an official church teaching, much less an ex cathedra proclamation that claims the authority of papal infallibility.

And questions have arisen about the editing of the quotation.  The footage appears to be taken from a 2019 interview with the Mexican broadcaster Televisa.  But, for whatever reason, the statement about civil unions was edited out, both when the interview was run in Mexico and when the Vatican itself released its own version.  Then again, Afineevsky, who is himself gay, himself edited out what the Pope says next:  “That does not mean approving of homosexual acts, not in the least.”

So what is the pope endorsing?  Celibate civil unions?  Is the idea that romantic attachments could be given a legal sanction that would constitute a family apart from sexual activity?  That would be an interesting innovation–a new kind of family entirely–though such a novel institution would raise questions of its own.  (For example, could priests and nuns form these kinds of families, as long as they refrain from sex?  Does this option underestimate the strength of the sexual drive?)

In general, as they are currently constituted, civil unions and civil marriages are a distinction without much of a difference.  Pretty much the only difference is that people can walk out of a civil union without going through a divorce.  Thus, in some jurisdictions, heterosexual couples have been getting civil unions instead of civil weddings, so that if things don’t work out, they can leave the relationship without the legal and economic trauma of getting a divorce.  (How would that accord with Catholic doctrine?)

As this Catholic apologist explains, the Catholic church does recognize civil marriages.  Just as Protestants who convert to Catholicism do not have to get re-married, Catholics who were married by a justice of the peace are considered to be validly married.  The apologist goes on to say that the church still cannot accept a same-sex marriage, though in accord with civil law, because, despite the name, it does not constitute an actual marriage, which in its essence must be between a man and a woman.

The Catholic church is concerned with “essences,” not just “names,” and this rejection of “nominalism” is foundational to Catholic thought.  Another kind of nominalism would arise if the only difference between a “civil union” and a “civil marriage” is the name, as opposed to the essential relationship.

Also, Catholic ethics are grounded in “natural law,” not just in church dictates.  The purpose of sex–biologically, naturally–is to engender children.  Therefore, sex that is not ordered to that end–even in marriage, as in the use of contraceptives–is immoral.  And this is why homosexual sex is intrinsically, as they say, “disordered.”

A civil union for homosexual couples would seem to bestow at least some level of moral approval to gay sex–though Pope Francis says it does not–and for a civil union to constitute a family (without children?  with adopted children?) would seem to set aside everything that Catholic ethicists have taught about natural law.  This too would shake the foundations of Catholicism.

Those of us who are not Catholics–believing that the Bible, not a human leader, makes the most reliable authority; believing that marriage, though an icon of Christ and the Church,  is not a sacramental creation of the church but a temporal vocation that applies to all human beings, etc.– will look at these issues differently.  But we are at least allies with Catholics–call it a kind of intersectionality of the morally marginalized–when it comes to sexual morality.  We would join with our conservative Catholic friends in wishing that Pope Francis would speak more carefully and, if he is misconstrued, to explain his position more forthrightly.