Thanksgiving and the 1620 Project 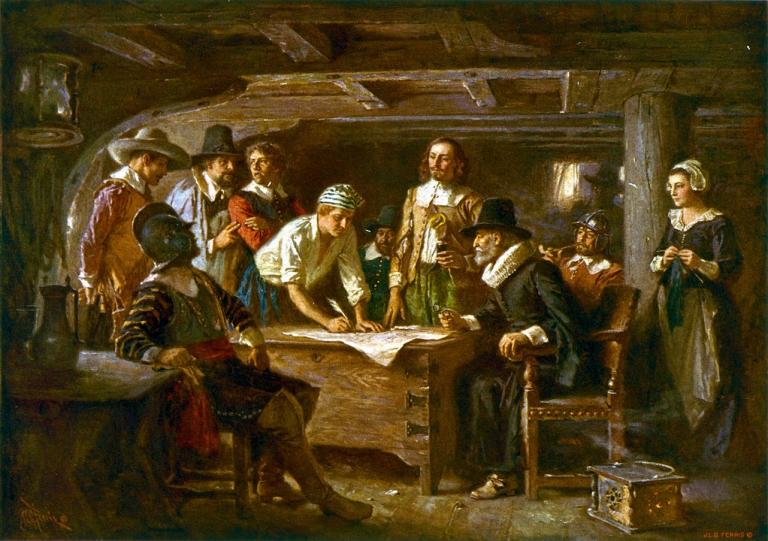 Thanksgiving in 2020 may not seem quite as festive as it usually is, with the COVID-19 resurgence putting the kibosh on many family gatherings.  Then again, the original Thanksgiving was also in the context of deadly disease, which wiped out half of the Plymouth colony that first winter.  But the 53 survivors still believed they had much to be thankful for.  Celebrating the end of the pestilence and a successful harvest, they were joined by 90 members of the Wampanoag tribe, with whom they had become friendly, and the feasting went on for three days.

The New York Times started the 1619 Project, maintaining that the arrival of the first African slaves in the Virginia colonies on that date represents the true founding of the United States, which the project insists is racist to its core.  The Federalist is countering that revisionist take on history–which has since been discredited–with the 1620 Project, arguing that the Pilgrims who sailed on the Mayflower and established the Plymouth colony are the ones who truly defined America.

Not that the 1620 landing at Plymouth Rock was the real founding of the nation–that was 1776–Ben Domenech explains, but those settlers would exemplify and shape the national character.  He quotes an unexpectedly eloquent description of them from Calvin Coolidge:

There was among them small trace of the vanities of life. They came undecked with orders of nobility. They were not children of fortune but of tribulation. Persecution, not preference, brought them hither; but it was a persecution in which they found a stern satisfaction. They cared little for titles; still less for the goods of this earth; but for an idea they would die. Measured by the standards of men of their time, they were the humble of the earth. Measured by later accomplishments, they were the mighty. … In appearance weak and persecuted they came ­­ rejected, despised ­­ an insignificant band; in reality strong and independent, a mighty host of whom the world was not worthy, destined to free mankind. No captain ever led his forces to such a conquest. Oblivious to rank, yet men trace to them their lineage as to a royal house.

These so-called Pilgrims were not really “Puritans”–those who wanted to “purify” the Church of England; they were “Separatists,” wanting to separate from the state church completely.  As such, they were persecuted, but their yearning for religious liberty led them to abandon their homes in England for a dangerous wilderness, to build a new life, starting from nothing, in the New World.

But it wasn’t just their quest for freedom that made them the model for subsequent Americans.  Before they landed, they drew up and signed the Mayflower Compact, committing themselves to the principles of self-government.  Here it is:

IN THE NAME OF GOD, AMEN. We, whose names are underwritten, the Loyal Subjects of our dread Sovereign Lord King James, by the Grace of God, of Great Britain, France, and Ireland, King, Defender of the Faith, &c. Having undertaken for the Glory of God, and Advancement of the Christian Faith, and the Honour of our King and Country, a Voyage to plant the first Colony in the northern Parts of Virginia; Do by these Presents, solemnly and mutually, in the Presence of God and one another, covenant and combine ourselves together into a civil Body Politick, for our better Ordering and Preservation, and Furtherance of the Ends aforesaid: And by Virtue hereof do enact, constitute, and frame, such just and equal Laws, Ordinances, Acts, Constitutions, and Officers, from time to time, as shall be thought most meet and convenient for the general Good of the Colony; unto which we promise all due Submission and Obedience. IN WITNESS whereof we have hereunto subscribed our names at Cape-Cod the eleventh of November, in the Reign of our Sovereign Lord King James, of England, France, and Ireland, the eighteenth, and of Scotland the fifty-fourth, Anno Domini; 1620.

Yes, they acknowledge the sovereignty of King James, despite his having persecuted them, but the Separatists who stayed in England would rise up, along with the Anglican Puritans and other subjects, against his son, Charles I.  By the end of the English Civil War, their forces overthrew the king and then executed him!  From 1653-1659, they ruled England as a parliamentary Republic.  This was not a complete success, and in 1660 the monarchy was restored, but the government of the country was nevertheless under the control of the elected representatives in the legislative body of the Parliament, where it remains today.  But when Charles II came to the throne, he began to persecute those who killed his father.  Many of them fled–to America, strengthening its burgeoning opposition to monarchy and its commitment to representative government.

In contrast, the institution of slavery that took hold in the South, far from defining America, was seen by most of the Pilgrim’s linear and spiritual descendents as being distinctly un-American.  There were many reasons why the New Englanders were mostly abolitionists.  Slavery, of course, was cruel and inhumane on every level.  The sexual wickedness–by which slaveowners would rape their slaves, then make slaves of their own children–was particularly monstrous.

Slavery also offended the Protestant Work Ethic.  To force others to do all of the work, for no pay, while their “owners” lived in idle luxury was considered grossly immoral.  The large plantations, with their aristocrats living in mansions presiding over vast fields worked by people considered socially inferior, smacked of Old World decadence, with its feudal hierarchies and moral corruption.

For the Separatists and subsequently for all Americans, in values if not always in practice, “all men are created equal.”  Religious, political, and social hierarchies are anathema.  Popes, Kings, aristocrats, the lord of the manor, slave owners were all of a piece.  Indeed, some wealthy Southerners affected the “chivalry” and “aristocratic values” of old Europe, describing their slaves in terms of the medieval peasantry, leading to the honor culture that played out in the Civil War.  Mark Twain would witheringly attack this mindset in devastating satires, such as A Connecticut Yankee in King Arthur’s Court, which is both an evisceration of Old World values in favor of the new Americanism and a critique of the slave-holding culture that the author grew up in.

So, yes, 1620 is definitively American in a way that 1619 is not.  Remember that during your Thanksgiving feast.

November 27, 2020 Why It's Hard to Worship with Pop Music Styles
Recent Comments
0 | Leave a Comment
Browse Our Archives
get the latest from
Cranach
Sign up for our newsletter
POPULAR AT PATHEOS Evangelical
1