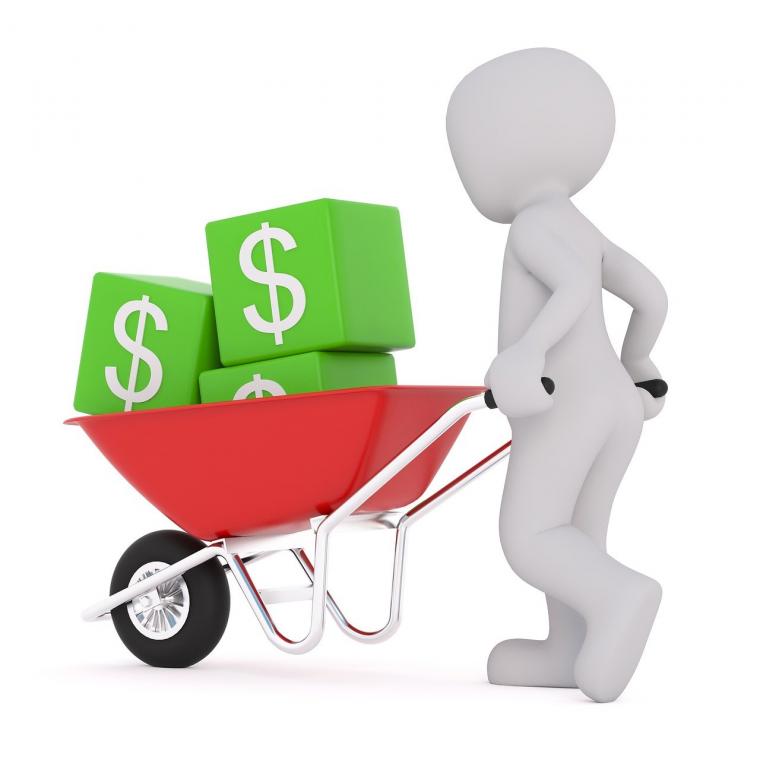 Inflation is back.  Of course, you knew that if you have gone to the grocery store, filled up your car with gasoline, or purchased any big-ticket item, such as an automobile or a house.  It reminds us old-timers of the 1970’s, when inflation ate up our bank accounts and the government’s attempts to combat it only made things worse.

Prices are up across the board.  In May the inflation rate soared to 5%.  How could it be otherwise?  The post-COVID economy is booming, due to pent up demand after the lockdown.  But despite the rapid economic growth, the government is pouring on additional money, bailing out an economy that doesn’t need it!  And it seeks to spend more and more and more.

On top of that, the Federal Reserve is also pouring money into the economy while holding interest rates close to zero, an additional stimulus that we no longer need.

More money chasing fewer goods, to use the economic axiom, creates inflation.  While the economic growth is good, inflation takes away consumers’ ability to benefit from that growth.

And we have to blame the policies of the Biden administration.  (See, for example, Charles Gasparino, Latest economic figures show Bidenomics is not working.)

But this is not just a political judgment.  The Bank of Germany–a progressive country, but one that is careful about its economy–is worried about what is happening in the United States.  Chris Talgo reports on this for The Hill–not a conservative publication–in his article Deutsche Bank issues dire economic warning for America.  Here are some excerpts that he gives from the bank’s report that it issued, entitled Inflation: The defining macro story of this decade [emphases mine]:

“US macro policy and, indeed, the very role of government in the economy, is undergoing its biggest shift in direction in 40 years. In turn we are concerned that it will bring about uncomfortable levels of inflation.”

“The current fiscal stimulus is more comparable with that seen around WWII. Then, US deficits remained between 15-30% for four years. While there are many significant differences between the pandemic and WWII we would note that annual inflation was 8.4%, 14.6% and 7.7% in 1946, 1947 and 1948 after the economy normalised and pent-up demand was released.”

“Monetary stimulus has been equally breath-taking. In numerical terms, the Fed’s balance sheet has almost doubled during the pandemic to nearly $8tn. That compares with the 2008 crisis when it only increased by a little more than $1t, and then increased another $2tn in the subsequent six years.”

“We worry that inflation will make a comeback. Few still remember how our societies and economies were threatened by high inflation 50 years ago. The most basic laws of economics, the ones that have stood the test of time over a millennium, have not been suspended. An explosive growth in debt financed largely by central banks is likely to lead to higher inflation. … Rising prices will touch everyone. The effects could be devastating, particularly for the most vulnerable in society. Sadly, when central banks do act at this stage, they will be forced into abrupt policy change which will only make it harder for policymakers to achieve the social goals that our societies need.”

Though President Nixon is usually characterized as a conservative, he took the extraordinarily liberal step in 1971 of imposing wage and price controls.

What that did was to empty the shelves in the nation’s stores.  Since manufacturers were not allowed to charge enough to cover their growing costs or to make a profit, they stopped making things.  I remember scrambling to find groceries to buy.  And looking for gas stations that still had fuel and waiting in line in hopes of getting some.  (A problem later exacerbated by the oil crisis of 1973, when Arab nations shut off fuel to the U.S. because of our support of Israel.)  [Survivors of the 1970’s, feel free to share your experiences with inflation and shortages in the comments.]

Nixon cancelled the wage and price controls after 90 days, but while those months were inflation-free, inflation roared back higher than ever.  The government tried other futile attempts to stem inflation, such as Gerald Ford’s “Whip Inflation Now” campaign, which included encouraging citizens to wear WIN buttons.

Only when Paul Volcker was appointed to head the Federal Reserve by Jimmy Carter was inflation seriously dealt with.  He cracked down on the money supply and raised interest rates, triggering a ruinous recession.  That spelled the end for Carter’s presidency, but Ronald Reagan reappointed him, leading to the new prosperity of the 1980s.

But it looks like we are going to go through all of that again.  Americans today are used to prosperity and take it for granted.  Perhaps losing it will be good for our national character.  And perhaps another Reagan will arise to pull us out of the coming economic mess.