“The Church Must Keep Up with the Times” 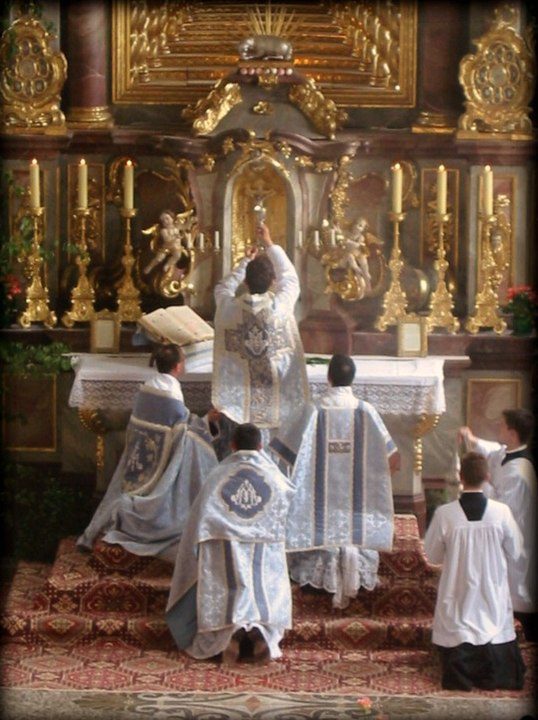 There’s a scene in Mel Brooks’s 1970 movie The Twelve Chairs, which is set in the Soviet Union in 1927, in which a Russian Orthodox priest played by Dom DeLuise expresses sympathy for communism in a fight with another character. His interlocutor asks him how he, as a priest, could be a Communist Party member since atheism is a requirement for membership. DeLuise shrugs and replies, “The church must keep up with the times.”

I thought of this too in the controversy among Catholics, with Pope Francis essentially banning the traditional Latin mass.  The  big convocation in the 1960s known as Vatican II sought to make the church “keep up with the times.”  So they jettisoned old identify-forming traditions like abstaining from meat on Fridays and  installed a new mass that was not only in the vernacular–something we Reformation types would certainly support–but also made it possible to tone down the mystery by incorporating contemporary Christian music and a host of informalities.   The post-Vatican II mass can still be reverent–there is even a Latin version–but in many parishes it comes across as far too casual, with 1960s-Peter-Paul-and-Mary style guitar music (not referring to the saints of those names but to the folk singers) and trying-too-hard attempts to be up to date.

(One problem with trying to “keep up with the times” is that, to paraphrase Bob Dylan, the times they are always changing.  By the time one style of “contemporary” music gets incorporated into a church service, it will have gone out of fashion.  There is nothing that seems more outdated than yesterday’s fashion, especially when older adults try to do it.  This is why, when the church tries to be contemporary, it is generally a step or two behind and thus comes across as old-fashioned.)

So some Catholics pushed for a return to the old Tridentine Latin mass (named for the council that launched the counter-Reformation), with all of its genuflections, prostrations, incense, rituals, and symbolism, and Pope Benedict XVI gave them permission to do so.  The return of the old mass, in parishes that chose to go that route–at least for some services–did attract die-hard traditionalists, including those who disapprove of Pope Francis, but it also attracted young people, who were captivated by how different it was from the pop culture they were used to and yearned to escape from.  This kind of worship seemed to them to be mysterious, transcendent, and holy.

But now Pope Francis, who is interested in modernizing the church, has reversed his predecessor’s permission.  In the name of church unity, he says, we need to go back to the vernacular, contemporized mass.  We must keep up with the times even when the times want to go back to something better.

Lutheran that I am, I don’t mean to defend the mass, whether traditional or modern, which is shot through with theological errors.  But we too have had our worship wars between those who want the traditional Lutheran liturgy–a form of the mass purged of its errors, but keeping the structure, the set-pieces, and the chanting–and those who want a more contemporary service, similar to those of evangelical megachurches.  There are also those in between, who blend some contemporary elements and contemporary music into the liturgical structure.  The debates were fierce a few decades ago, but my impression is that the worship wars among Lutherans have died down.

Our confessions actually allow for variations in “ceremony.”  The main issue for Lutherans is doctrinal unity.  And this is where the desire to “keep up with the times” is most caustic to Christianity.

The notion that the church should keep up with the times is perhaps the best definition of liberal theology.  The idea is that for the church to be relevant, it must change its teachings to accord with the beliefs of the day.  Thus, liberal theology has championed at various times, the social gospel of 19th century progressivism, New Deal liberalism, Marxist liberation theology, and now post-Marxist critical race-sex-gender theory; also, enlightenment rationalism, romantic emotionalism, civil religion, existentialism, feminism, queer theory, etc., etc.  Also psychology, the self-esteem movement, encounter groups, New Age, and becoming “woke.”   Paradoxically, just about every secularist idea can be found in churches; that is, among liberal theologians and the mainline Protestant–and liberal Catholic–churches they call home.

In fact, some liberal theologians have made a reality of what Mel Brooks intended as a joke, actually adopting what they call “Christian atheism”!

So in what sense should Christians “keep up with the times”?  The Bible commends the men of the tribe of Issachar, “who had understanding of the times, to know what Israel ought to do” ( 1 Chronicles 12:32).  I think that Christians should try to keep abreast of what is happening–the news, the new ideas, emerging worldviews, and contemporary issues.  Not only because of their vocations of citizenship but because awareness of “the times” can help them from being unduly influenced and can identify areas that call for a Christian response.  Orthodox theologians should follow the new trends in their field, not to adopt them, necessarily, but to answer them.  And “the times” might also bring up trends, ideas, and technologies that Christians can put to good use.

How else might Christians keep up with the times without selling out to the times?  Are there some lines that can be drawn between accommodations that are acceptable and those that aren’t?

Photo:  The Tridentine Latin Mass  by the Priestly Fraternity of Saint Peter, available from http://fssp.org., Attribution, via Wikimedia Commons

July 29, 2021 "Liberal Authoritarianism"
Recent Comments
0 | Leave a Comment
Browse Our Archives
get the latest updates from
Cranach
and the Patheos
Evangelical
Channel
POPULAR AT PATHEOS Evangelical
1