I enjoyed a conversation with a retired minister in my church yesterday. During our time together he confided that he was supplementing his income with a little used-book business he has online.

He planted a church in western Massachusetts and served that church faithfully for nearly 40 years. It is a thriving church by New England standards, but it never had much money. He excelled in evangelism, and meeting people, and being a help to folk. But funds were always tight, and when it came time for him to retire, there wasn’t much the church could do for him. It needed all its resources to support the next pastor it would call.

So this godly man and his wife get by on Social Security, a little savings, and his book business.

Fortunately he’s been at it for years. He’s marked out his fishing holes, where he can get books cheap. Once he gets them he sells on-line with a modest mark-up. He makes about 5 dollars a book.

A Betrayal of One’s Vocation?

Many of us labor under the notion that a calling should monopolize your life, that something on the side is in some sense a compromise.

I suspect this has something to do with the ethos of specialization and the division of labor that serves the corporate economy so well. But I wonder whether or not some of our teaching on vocation, especially in the Reformed tradition, is part of the problem. Have we inadvertently sent the message that those who can’t support themselves entirely by their ministries are failures? You know, real ministers don’t need to sell books on the side, real ministers wouldn’t lower themselves in this way.

The Cult of Excellence

Another way to think about this is the adage, if you want to be great you need to focus on one thing. Or, viewed from another angle, the missive, “He’s a jack of all trades, and master of none.”

But a specialist is just a person who fits into a larger whole. Generalists tend to see the whole. Anyone who steps back to look at the way the world actually works can see that specialists work for generalists, not the other way around.

I remember hearing a story from another minister. This one happened to be my mentor. He got into the ministry later in life after spending time as a high tech entrepreneur. He told me of a time, not long after he started his company, when an engineer challenged him on the value he brought to the business. Sort of, “I know what I do, but what do you do?” His response? “I hire people like you, and I also fire people like you.”

I suppose if you’re a Mozart in your field you should specialize. (But remember, Mozart died penniless.) But if living is your specialty, you should probably specialize in being a generalist.

You know, the Apostle Paul had something on the side and he did all right. He even managed to make a little headway in the ministry.

A few years back the term, “tentmaking” was coined for missionaries who did something on the side in order to get into countries where access was restricted. It has also been used for a church planter who needs to supplement his income with a little something on the side until his plant can support him.

But I don’t think either quite represents what Paul was up to with his tentmaking. Of the two, the second is closer to the truth. But since Paul was on the road much of the time, the impression I have is the trade was something he picked up and put down any number of times during the course of his ministry. And I don’t get a sense that it was in any way a distraction or a kind of compromise on his part.

The reference to it in scripture is an aside, a little detail intended to help us understand why he got on so well with Aquila and Priscilla. (Acts 18:1-3)

And I think this can help us to see one of the problems with the contemporary understanding of vocation, it isolates us. Paul had at least two things he could do well and one served as a bridge to the other. Too many ministers (and seminary professors) have isolated themselves. They’ve formed guilds, with lots of inside baseball, secret handshakes, and the myopia that follows when you lose sight of things and people outside your little clique.

The Benefits of Tentmaking

I speak with a measure of experience here. I can’t convey adequately how important it has been for me to have things on the side during my ministry. Here’s a list of my sidelines: investing in real estate (rentals), renovating homes (as a contractor and to flip houses), publishing (fiction and nonfiction), and teaching philosophy as an adjunct professor at a local college.

Here’s a list of a few of the benefits of these sidelines that come to mind.

Remaining in touch with the world beyond your church

This of incalculable benefit to your work as a minister. And this is something that your people will not only understand, they’ll applaud.

Ever wonder how many people compromise on something they believe in because they’re afraid to lose a job? It happens in the ministry too–a lot. When you’ve got “Plan B” ready to go, it has a way of stiffening your spine.

A few years back, when the other shoe dropped on the economy in 2008, my church, like every church, saw less money in the offering plate. So to keep the church on a good footing, I took a voluntary pay-cut. I could afford to. Believe me, it made a good impression. I still hear about it from time to time.

My kids are all around college age. The oldest just got his degree in philosophy. Number two is in trade school for welding and is heading off to college next year, and the daughter will be off to college the year after that. Their educations are being underwritten by those rental properties they’ve helped me with over the years.

I could go on, but I’d rather hear your thoughts. Is there something you’d like to share about your experience as a tentmaker? Any benefits I’ve missed? 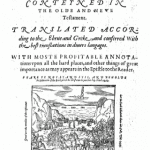 February 29, 2016
Why We Need a Libertarian Study Bible
Next Post

Why Lying Has Become Normal and...
Roger E. Olson
Books by This Author Books by PaterFamilias Today