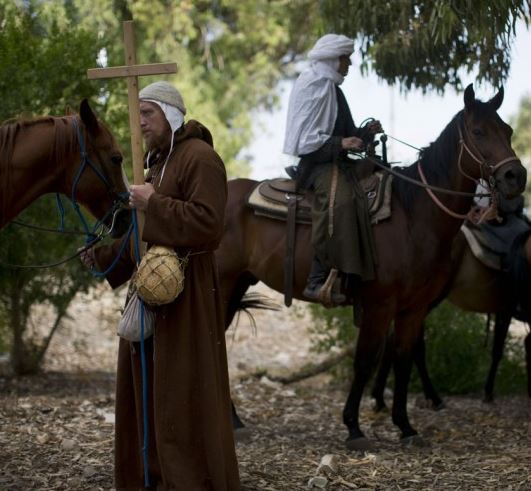 Last week, a group of Russian and Israeli history buffs and reenactors staged the Battle of Hattin, in which Saladin routed the Crusader Kingdom of Jerusalem near the same extinct volcano in Israel where the original battle was fought July 3rd and 4th, 1187.

Replete with swords, shields and body armor, the group marched 27 kilometers (17 miles) this weekend while re-enacting one of the most significant battles of the Middle Ages. The level of detail went down to the use of wooden and ceramic utensils and hand-woven undergarments reflective of the time.

“It’s a direct way of connecting to history, not through books and not through the computer,” said Genadiy Niznik, who organized the event and heads the only Israeli chapter of the “living history” trend.

About a third of the participants arrived with their elaborate gear from Russia. The project is supported by the Lower Galilee Regional Council.

Read the whole thing to see some great stills from the event.

July 13, 2015
The Cathedral of Our Lady of Amiens in Minecraft
Next Post

July 14, 2015 The NAACP Sets Its Sights on Stone Mountain
Browse Our Archives
get the latest from
Catholic
Sign up for our newsletter
POPULAR AT PATHEOS Catholic
1

Pro-Life March In Philadelphia On January 23, 2021
The Pro-Life Union of Greater Philadelphia will host the "Philadelphia March for...
view all Catholic blogs
Copyright 2008-2020, Patheos. All rights reserved.