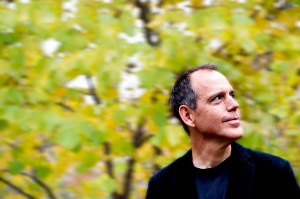 David Wilcox describes himself as a “father, a husband, a citizen and a songwriter…a traveler—an adventurer at his core, always on his way somewhere.” The celebrated songwriter and creator of more than eighteen albums began his career with a bike ride through North Carolina when he was a teenager and has called Asheville home ever since.

Wilcox’s latest album blaze debuted Tuesday. I talked to him about narrative and responsibility, creative process, and how songwriting opens his heart and teaches him to engage with the world.

Shannon Huffman Polson: Your lyrics have a very real narrative element to them, sometimes even writing songs from the perspectives of different characters. Where did that idea come from and what does it do for you?

David Wilcox: I love the experience of being carried along by a story and having it open to another layer like a good parable does. This can surprise me with an emotional experience that’s a surprising compassion or reframing of a circumstance. A good story can do this—I love stories that walk beside you and gradually walk you to a place you might not have gone otherwise.

Those are the songs I love to have in my life. That’s what I aspire to. The songs I write I write because I want to learn from them, I want to see the world the way they see it.

SHP: Where do these characters come from?

DW: In film there is a term called creative geography—you’re walking up the steps to a building and the camera looks through the door and it’s never the same building, but seen in the movie it becomes the same building. There are characters I know, have read, and have compiled. If I were to tell the story honestly it would be bits and pieces from different characters to serve the idea or the emotion.

For the sake of the song, making one character usually serves the song the best. I might first write a song in the second person, and then if it sounds preachy, I’ll write it in the first person. Then I might see it needs perspective and move into third person.

In one of the songs on blaze there’s this cop who works the late night shift and shows up on the job where this kid has been gunned down. He’s been working so many years his heart has built up this protection as he goes through his job. He’s so removed, it’s almost pathological, and yet that character is me as I drive past that guy with the cardboard sign, and I realize I’m constructing this weird safety, and isolating myself.

Songs carry emotion; they don’t carry abstract ideas, so I had to write it from the perspective of a guy who is so insulated and isolated he’s showing me I have to be careful about the walls I build. We all have to live inside our own walls.

SHP: You have spoken about the element of surprise in composing music; writers of fiction and non-fiction speak of this as well, the importance of writing into something uncomfortable or unknown to arrive at a truth. What is this process of truth-finding like for you?

DW: It’s a fascinating tool to have music that will open my heart in a particular way. I show up because it is my practice to show up to the empty page and the quiet. I’ll ask the guitar if there is something subliminally working in my heart. It’s as though I’m asking a question of the guitar. I find a sound—something I haven’t played before—and then my heart will start to open in way that’s intriguing.

There is something that the sound is doing that will affect my heart. The fun part is that once I get the music tuned to that frequency, that one part of my heart really has the musical light shining on it and I am feeling a discernible specific emotion. I’ll ask myself if this were the soundtrack of a scene, what would the scene be? What is the essence of this emotion, what conversations have made me feel like this, what movies or books have made me feel like this?

That’s the process of putting the puzzle pieces on the table, getting everything out, and then I start to look at where things work together. There may be two or three different stories or ways of constructing a song and I work with the one that has the greatest alignment emotionally, and then I’ll work on pacing, where the story is going. The end point is known and the beginning changes. I come to the character last.

There’s an old song of mine about a really close call on a really fast motorcycle. I wrote it from my point of view and then from a friend’s point of view who had died on a motorcycle, and then I wrote it from the perspective of a woman, and a really interesting underlying subtext came out of it. “Eye of the Hurricane” became a woman character because it works best with the emotion that I’m after.

Sometimes I’ll go to perform a song and introduce it with a completely different metaphor and I’ll have to go home and rewrite the song with that new metaphor, different melodies, rhythms.

SHP: You’ve identified and written songs about the natural world and our responsibility to it. What inspired these songs? Do you see your music as a catalyst for change?

DW: Environmental songs are the hardest for me to write—they are the ones that come across as placards, they’re the worst to sing because environmental songs are stating an idea and it’s hard to get at a story. And then I was looking at this pine forest, the one that John Muir took inspiration from—and realized this might be the first time that people are looking at the world and seeing that the world itself is broken. That weird feeling of responsibility and confusion—like a four-year-old kid accidentally killing his mom—a lot of us walk around feeling like this has just happened. The start of an idea like this is not a good starting place for a song—I don’t know where it’s going.

February 28, 2014Blaze: David Wilcox Opens the Heart, Part 2
Recent Comments
0 | Leave a Comment
""It doesn’t matter when you start the Sinatra Christmas playlist or put up your tree. ..."
C_Alan_Nault How to Win the War on ..."
"Yup."
Max Marvel Finding My Inner Calamity Jane
"I an confused by the use of "aural" here: "In The Gutenberg Galaxy, he explained ..."
William G II The Gutenberg Imagination
"My friend is looking for a Pepper Smith he served in the army with, was ..."
Christine Budnack The Love Song of Pepper Smith
Browse Our Archives
get the latest from
Catholic
Sign up for our newsletter
POPULAR AT PATHEOS Catholic
1