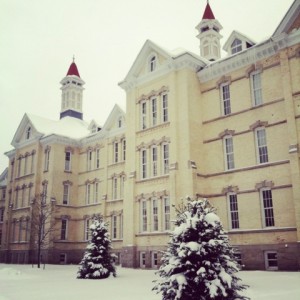 It’s probably not okay to call it the insane asylum. It’s officially the Village at Grand Traverse Commons, a mixed-use development with a brick-oven bakery, a coffee roaster, farm-to-table restaurants, a nature school and a place to buy ethically sourced yoga pants.

But there’s something satisfyingly shocking about calling it the insane asylum. It seems right to acknowledge why this place of luxury goods and services looks like the setting for A Series of Unfortunate Events, why it’s so beautiful and so obviously, poignantly, haunted.

It’s the word insane that’s the problem, for who could dislike the word asylum, which connotes protection, refuge and safety?

I love the idea that we used to shelter not only the criminally dangerous but the sick in the soul, the depressed, exhausted and nervous of the world. Not just for our sakes, but for theirs. The words insane asylum speak to me of what the Victorian-era psychiatrist Thomas Kirkbride—the designer of these buildings—described as “respectable decorum.”

Traverse City has some of the last standing Kirkbride buildings in America, and as I walk the grounds I feel perhaps a little too much sympathy with the former residents.

My thoughts turn to my uncle, a paranoid schizophrenic who spent most of his life in hospitals and a string of halfway houses, where he lived with other people’s families in a sort of adult foster care system in rural Mississippi. We’d visit him and I’d wonder who these people were and why he didn’t come home. We’d bring him books and cigarettes and I’d wonder if he spent entire days smoking in a rocker on the porch. I’d imagine how bored he must have been, how long and lonely the days, even as I was desperate to leave the unsettling quiet and the foreign smells of someone else’s home. Later I realized he was heavily sedated.

I’ve struggled with depression my whole life, and was prone to melancholy and anxiety even as a small child, well before I had any real reason. The trauma of my mother’s illness and death fanned the flames, but the fire was already burning. I started my first bottle of Prozac when I was thirteen.

And then I started to write, which is both a burden and a relief. To write is to exist momentarily on a plane where one can make connections, discern patterns, uncover and even force meaning from experience. The relief comes when I manage to write to that brief exhilarating moment when everything falls into place, a satisfaction so rarely felt in life. The burden is everything else about writing.

My uncle hunted patterns too. My sister sent me a box of his papers, which she discovered in her attic. It turns out he spent a lot of time and energy connecting our family to the Confederacy, beginning with his own initials, Cyril Solomon Arnold, the Confederate States of America. He also founded and edited a Catholic literary journal during his stay at Southeast Louisiana State Hospital.

He loved Walker Percy and Flannery O’Connor long before I discovered them. He was the only reader in our family, and it was in his abandoned bedroom at my grandmother’s house that I discovered a world of books where I could both hide and thrive. I inherited all those books. My sister and I are his sole survivors.

When I write I think of him. When I’m anxious and depressed I think of him.  And now, when I go to the asylum to wander the grounds, buy coffee, and admire the architecture, I think of him, and wish he could have taken refuge in its respectable decorum. And I wonder at the fine line between writerly tendencies and pathology.

In so many ways I am his heir. My overwhelming need to be alone. My obsession over single words or images for weeks at a time. My excessive religiosity. My ability—no, my need—to make connections between seemingly disparate ideas and images, to articulate a relationship that’s invisible to others but as obvious to me as glowing line from point A to point B.

I’ve often suspected that this was all symptomatic of some sort of mental illness, and now I’ve got the paperwork to prove how vague the boundary between creativity and insanity has been in my very own family. Paranoid schizophrenia runs in families, I’ve read. And if you experience trauma before adolescence the risk is even higher.

March 7, 2014
Her and Him: Digital Love and Divine Analogues
Next Post

March 11, 2014 Tuesday Morning at the Old Asylum, Part 2
Recent Comments
0 | Leave a Comment
"I miss that dragon the most finally it's here. 😳IJ.636PX.CO/c7234i"
Dmaned11123 Poetry Friday: “The Burned Butterfly”
"Ah, so now the imaginary War on Xmas is transmogrified into The War on Santa, ..."
David Miller How to Win the War on ..."
""Aural" refers to hearing, "visual" to seeing"
merphd The Gutenberg Imagination
""It doesn’t matter when you start the Sinatra Christmas playlist or put up your tree. ..."
C_Alan_Nault How to Win the War on ..."
Browse Our Archives
Related posts from Good Letters