The Sublime and Beautiful 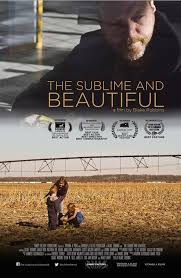 From antiquity to the Enlightenment, one of the great aesthetic dichotomies involved the sublime and the beautiful. If the contrast of those terms is any indication of meaning in Blake Robbins’s movie of the above-referenced title, the intention is extremely subtle. The film deals with unspeakable tragedy, and one would be hard-pressed to find any conventional definition of either term as fitting for what transpires.

However, if they are taken not as terms to be distinguished, but as terms that inform a third object—due to an important excision of the second article “the”—there is more of an argument. That is, if the terms are taken as adjectives modifying a particular person or state—“that which is sublime and beautiful”—then you can see what he is after. Still, it takes some convincing.

According to the Longinian distinction (Longinus being the first to write about it), the beautiful delights in a pleasing way; the sublime, on the other hand, provides not so much delight as awe, and the awe often comes by way of the unsettling, even the terrifying. A meadow in springtime is beautiful; the rocky chasm of a mountain gorge, dropping off a mile deep, only inches away from the beholder, is sublime.

An experience of the sublime is exhilarating, but not necessarily pleasant, as would be the experience of the beautiful. But when the subject is the emotional life of the human being, those terms might be mutually applicable to the same state, at the same time, at least insofar as the handling of the sublimely torturous is something that inspires awe, and as much as the ability to survive the drop into the gorge can be beautiful.

Robbins sets his tale in a cold Midwest. The main character, Dave, played by the writer/director himself, is an out-of-shape, middle-aged college professor with a wife and three children. There’s nothing particularly wrong with his life, but he’s not particularly settled either. To wit, he begs out of a Christmas tree decorating party at his parents’ house by telling his wife that he has too much grading to do.

Instead, he sneaks off to meet his graduate assistant, with whom he’s having an affair. He appears to be having the kind of nebulous crisis that hits many of a certain age, one in which he wonders what the point of it all is.

On the way home, he checks his phone messages and finds his family has been involved in a car wreck. What follows is an unromantic chronicle of the man’s walk through hell. His loss is almost as complete as it can be, and what he’s left with is—as must always seem the case to those left behind—more of a curse than a blessing.

All relationships sour, as he can no longer say anything to people and no one can say anything to him. The sight of happiness in the world becomes an insult, an affront. Everyone draws back from the chasm, horrified.

However, the disposition that the character takes is an unusual one. He does not weep or wail, but neither does he walk about in shock. Instead, even when he stares at the all too real evidence of his loss, he does so with the unmoved expression of one who has been told something that he suspected all along.

He acts as though the pain he’s experiencing and the horror he’s witnessing are anticipated visitors, finally arrived. There is some small indication that he feels guilty for his absence on the night of the great disaster, but that too seems taken as more empirical evidence of the pointlessness of things.

Perhaps as a means to blast himself out of this limbo, plotting an act of revenge is the only shape his life can take. The man that brought about his loss is hunted. That kind of motivation must be understandable to all the aggrieved who have a particular person to blame, if only because it provides them with something to do when nothing seems to matter anymore.

Blood courses and muscles tighten when there is a direct object worthy of hate; such a purpose is revivifying, both because it offers a reason to go on and because it supplies some relief from the stagnant torment of sorrow’s bath.

That said, one drawback in the film is the uncertainty about how far Dave goes in realizing that revenge, and the depth of his responsibility for what befalls his target. The result is not clearly explained, and while ambiguity of meaning can be an asset, as per literary critic William Empson, ambiguity of plot development is not.

Also, the spiritual resolution that Dave comes to is somewhat compromised by this vagueness; that he takes the steps he does at the end of the film implies that he resists doing his worst. At any rate, the resolution is a quiet one—a small measure that puts him at a place that may be a beginning in the long climb out of his abyss.

Robbins seems to imply that this is the only honest point at which to end the tale, given the circumstances. Artistically, it is a commendable stopping place.

There are some predictable scenes and emotions in the film—rages, despairs, inexplicable choices—but then the path of loss and grief is not new; from a narrative standpoint, loss and grief may be unportrayable without this predictability.

And while transcendence over familial tragedy has been dealt with on a greater scale and with a broader range in such films as Rabbit Hole and, most wondrously, the Dardenne brothers’ Le Fils, Robbins’s contribution with The Sublime and Beautiful offers a unique portrait. It is that of a man in existential turmoil, beset with the kind of Job-like devastation that will either be the makings or the destruction of him, and whose journey through such a terrible place is worthy of awe, regardless of how discomfiting it may be.

The photo above is the official poster for the movie the Sublime and Beautiful, reviewed here.

January 30, 2015 The House Where Beauty Lives
Recent Comments
0 | Leave a Comment
Browse Our Archives
get the latest from
Catholic
Sign up for our newsletter
POPULAR AT PATHEOS Catholic
1