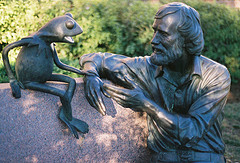 It was a Saturday night and my wife, Becki, wanted to stream the documentary, Being Elmo: A Puppeteer’s Journey, on Netflix. As a new father, I protested. Our seven-month-old daughter Evie carried with her the promise that Elmo would invade our house soon enough—but this was too soon.

I also protested because I lost much of my enthusiasm for puppets when Jim Henson died on May 16, 1990. When Henson’s silver cord was severed—a phrase the writer of Ecclesiastes uses to refer to death—the rainbow connection Henson sang about as Kermit the Frog was disconnected for me.

People said Henson’s death could have been prevented if only he had gone to the hospital earlier. In my eleven-year-old mind, I thought this meant he had given up on living, much as people give up on hobbies they no longer love.

That such a creative force could slough the mortal coil so casually was disappointing to the child in me who had grown up watching Sesame Street. To the almost-adolescent boy in me who insisted on renting Labyrinth repeatedly from the video store, it was as if Henson had allowed David Bowie’s Goblin King to spirit him away without protest.

Henson had cared so much about his creations. How could he die so carelessly? It was as if God himself had abdicated his throne with a heavenly ho hum.

All of these thoughts went unchallenged in my mind for twenty-two years. I thought these things, filed them away, and had no need to reexamine them until Becki and I watched Being Elmo together.

Being Elmo, as it turned out, was not a sticky sweet salute to the Sesame Street character whose Tickle Me toy incited retail riots in 1996. Director Constance Marks captured puppeteer Kevin Clash’s story on film with such joy that even I was tickled. But even more surprising was the fact that the film’s loving remembrance of Jim Henson prompted me to rummage through all those old files in my brain.

I learned the word introject in a graduate-level counseling course, and I think it fits the bill here. Children have a way of accepting information uncritically—of taking it in like a vending machine accepting a coin—and assuming it’s factual. As adults, these deposits of information from childhood—these introjects—have a way of turning up like bad pennies in our brains.

Being Elmo turned my cranial coffer upside-down unexpectedly, and one of those bad pennies fell out: I had accepted my childhood interpretation of Jim Henson’s death without questioning it, and his legacy in my mind had diminished accordingly. Being Elmo was offering my adult brain the chance to challenge what my eleven-year-old brain had not.

Even if Jim Henson had died a foolish death as I’d believed—perishing from a preventable illness because he waited too long to seek treatment—it was unreasonable for me to hold the belief that people could make mistakes in life, but not in death as well.

It also occurred to me that other creative heroes of mine had severed their own silver cords—with a steak knife in musician Elliott Smith’s case (if he had killed himself)—and I loved their creations nonetheless. Like Tupac Shakur’s hologram at Coachella 2012, Kurt Cobain and Elliott Smith regularly perform on the stage in my mind. Suicide could not kill my love for their music.

If grace could blunt the trauma of suicide, surely it could redeem the memory of a pioneering puppeteer who hesitated to pursue treatment for bacterial pneumonia simply because he didn’t want to burden anyone with his condition. How often had I hidden the effects of my obsessive-compulsive disorder from friends and family because I didn’t want to burden them? My motivation had been love, and I like to think it was Henson’s as well.

Shortly after seeing Being Elmo, Becki and I watched James Bobin’s 2011 movie, The Muppets, a second time. I had enjoyed it the first time, but that old Henson introject—that bad penny in my brain—was still lodged in the folds of my gray matter then.

The second time, freed of this copper culprit, I watched the film with a child’s eyes. When Sam the Eagle, Rowlf the Dog, Link Hogthrob, and Beaker performed Nirvana’s “Smells like Teen Spirit” as a barbershop quartet, Jim Henson joined Kurt Cobain onstage in my mind in an oddly fitting pop-culture pairing.

In what may seem like an aside, Jim Henson was not the only casualty of my childhood introjects. When Walter Mondale ran for president against Ronald Reagan in 1984, a first-grade classmate told me Mondale would spread cancer throughout America if he were elected.

This unfounded fear animated me as if I were one of Jim Henson’s puppets, prompting me to repeatedly tell my parents to vote for Reagan. I could tell you I was in high school when I realized my classmate’s claim was false, but that would be embarrassing.

I say all of this because that which holds true for creators of puppets and candidates for Commander-in-Chief also holds true for another Creator who holds an infinitely higher office. If the thoughts of an eleven-year-old had the ability to alter how I perceived Jim Henson for twenty-two years, how much more have my thoughts about God distorted my perception of him?

In attempting to answer this question, I could search the basement of my brain for pennies or Canadian quarters, but I would rather return to the days that predated introjects, days that fell into the cracks in my mind like so much spare change.

One of my earliest childhood memories is of lying in a crib in a church nursery as a toddler and thinking of Kermit the Frog singing a song on Sesame Street. I remember lying there with television in my head and a song in my heart.

Chad Thomas Johnston is a slayer of word dragons who resides in Lawrence, Kansas, with his wife Rebekah, their daughter Evangeline, and five felines. He has written for Image Journal’s Good Letters blog, In Touch magazine, The Baylor Lariat, and CollapseBoard.com. Johnston’s first book, the whimsical memoir Nightmarriage, was a finalist for a 2013 Shirley You Jest! Book Award in nonfiction writing.

Photo above credited to Mark Zimmermann and used under a Creative Commons license.

May 7, 2015 Sugar, Sugar, Part 1: June 10, 2011
Recent Comments
0 | Leave a Comment
Browse Our Archives
get the latest from
Catholic
Sign up for our newsletter
POPULAR AT PATHEOS Catholic
1

What are people starving for, Fr....
Catholic Bard
Related posts from Good Letters