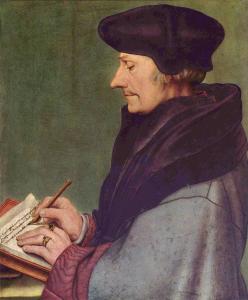 Picture The Old Humanist standing at his desk. The year is 1533. Desiderius Erasmus is living in Freiburg, as he says to a friend, “like a snail in its shell.”

It’s another temporary stop on his long, peripatetic march through northern Europe, as he seeks to avoid persecution at the hands of Reformers and Catholics alike. He may be the most eminent scholar and writer of his generation, but the political and ecclesiastical situation in Europe is constantly shifting and dangerous.

It’s true that he could head south to Rome, where Pope Paul III has offered him shelter and support in a bid to make Erasmus an official spokesman for the Catholic cause.

The pope will, in fact, offer him the cardinal’s red hat in two years’ time, but Erasmus will turn it down, ostensibly for reasons of poor health and poverty (cardinals then being required to have an income of three thousand ducats a year).

The truth is that Erasmus has never been a team player: the one thing he has guarded most jealously over the years is his independence.

Erasmus’s health is indeed poor. He has gout, kidney stones, and something he simply calls a “paralysis.” His rooms in Freiburg are infested with fleas, which manage to get in at his ankles and collar. Money is in short supply. He has offers from would-be patrons in Brussels and Besançon—Erasmus, after all, would be an asset to any court or civic community—but he decides to stay put. For now.

He stands at the desk, his writing hand poised over a blank sheet of paper. This hand had once mesmerized the painter Hans Holbein the Younger, perhaps the greatest portraitist of his generation and the leading representative of humanism in the visual arts. Holbein had drawn and painted that hand incessantly, as if he could discern in it some sort of occult power, the power to alchemically turn the base element of raw words into the gold of wisdom and eloquence.

Erasmus writes down the title of the work: De Sarcienda Ecclesiae Concordia, “On Mending the Peace of the Church.” There is, of course, no peace in the church. It is the dawn of the Reformation, and both Protestants and Catholics have fractured into a hydra-headed beast at war with itself. When one head appears cut off, two spring up in its place.

Erasmus has been bitten by most of them. From the outset of his literary career, he has been a critic and a satirist. He has decried the tendency of his age to substitute the observance of exterior forms for genuine, interior devotion and virtue. He’s been hell on the monks and priests who have preyed upon the superstitions and pieties of the common folk, peddling indulgences and dubious relics, reducing true religion to magic and formalism.

He’s also mocked the third-rate scholasticism of his day—which had steadily degenerated from the time of Thomas Aquinas—for its tendency to devolve into intellectual abstractions and trivial moral conundrums. In his great comic masterpiece, The Praise of Folly, Erasmus depicts the scholastics as starving theologians nibbling on dry beans.

These principles have awakened the ire of the theology faculties at the great universities—Paris, Louvain, and Salamanca—which have pronounced their condemnations of Erasmus.

They also provided inspiration to many of the Reformers, including, initially, Martin Luther, who saw in Erasmus a champion and mentor. Erasmus for his part began by encouraging Luther, while at the same time cautioning him to restrain the violence of his rhetoric. “I think one gets further by courtesy and moderation than by clamor. That was how Christ brought the world under his sway.”

But Luther has long since lost patience with Erasmus and his desire to work toward the slow, steady reform of the Catholic Church. Luther has hurled at him a variety of epithets, including “enraged reptile,” but his primary accusations against him are timidity, weakness, and, oddly, ignorance.

Erasmus eventually and with great reluctance broke with Luther publicly, writing On the Freedom of the Will to refute Luther’s position. The German responded in kind, with On the Bondage of the Will.

When Luther had thought of Erasmus as a forerunner of reform, he had little trouble with the humanist’s belief in the importance of reading pagan literature as a means to developing the kind of literary imagination needed to interpret scripture properly. But in his fury at Erasmus, Luther has accused his former hero of fomenting paganism and unbelief.

And so it had been going. As the pamphlet wars heated up, some of Erasmus’s friends urged him not to get drawn in—not to lower himself by writing apologiae defending his positions. But he had on a few occasions given in.

Sometimes his responses were marked by the trademark wit and lightness of touch that had characterized The Praise of Folly and the witty dialogues collected in his Colloquies. (Nothing proved more infuriating to his enemies than his penchant for irony and humor.)

At other times Erasmus turned waspish, in part because he had been hurt by those who had turned against him, those who had put faction and warfare above friendship and goodwill.

It was one thing to be wounded by those who had turned on him, but another thing entirely to see the basis of the humanist cause being trampled and forgotten in the melee. Luther had said: “Erasmus, that king of amphibology, sitting on his amphibological throne, cheats us with his ambiguous language….”

This was to strike at the heart of the humanist belief in the importance of literature and rhetoric as a mediating force, capable of taking political and theological concepts and incarnating them in concrete language, drama, metaphor. Only with a mind trained by the study of rhetoric and style could one find the living tissue of spirit within the hard shell of the letter.

This post appears as the editorial statement in issue 94 of Image. 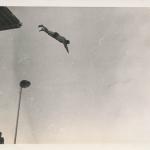 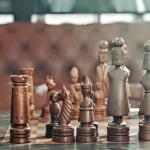 October 26, 2017 The Erasmus Option, Part 2
Recent Comments
0 | Leave a Comment
"Ah, so now the imaginary War on Xmas is transmogrified into The War on Santa, ..."
David Miller How to Win the War on ..."
""Aural" refers to hearing, "visual" to seeing"
merphd The Gutenberg Imagination
""It doesn’t matter when you start the Sinatra Christmas playlist or put up your tree. ..."
C_Alan_Nault How to Win the War on ..."
"Yup."
Max Marvel Finding My Inner Calamity Jane
Browse Our Archives
Related posts from Good Letters