Last week, our pastor preached a sermon on the topic of King David bringing the Ark of the Covenant into Jerusalem. Sitting there as part of the congregation, I had a sudden stunning understanding about this passage from 2 Samuel chapter 6 that I’d never had before—an understanding so fraught with meaning that I’ve been thinking about it all week.

Being a child raised in evangelicalism, my spiritual journey into adult faith has been grounded and formed by Scripture. As a youth, I memorized seven books from the Bible perfectly. I married an ordained minister, who himself preached a series on this topic in an inter-racial church we planted in the inner city of Chicago. Most preachers emphasize in some way or another that David, who had only recently assumed the appointment as king of Israel, stripped down to his linen ephod and danced before the procession, bringing the Ark back to the city. Few preachers avoid drawing an obvious parallel that the king was basically leaping and dancing around in his underwear.

Perhaps it’s because of the conversations I had while sitting around in Bible study groups as I traveled in Africa that the Old Testament stories come alive in new ways. Listening to Africans in Kenya, all modern and educated and wise, talk about their particular understanding of Bible stories made me realize there were nuances I just had simply never understood because of my American background, because of privilege, because of limited exposure to the world.

Take the story of Abigail and David as an example. Abigail, with her beauty, wisdom and insight, saves David from slaughtering in angry outrage her whole little village. She prepares food for his band of outliers, assuages David’s outrage, then tells her husband Nabal (whose name means “fool”) how his death has been avoided. Out of shock, he dies anyway, and Abigail immediately marries the leader of this renegade resistance movement, David (see 1 Samuel 25). I’ve often thought, Why did she marry him right away—or at least what appears from a surface reading as “right away”?

However, the Kenyan women sitting in our Bible discussion circle understood instantly. I gained insight when each described how her own tribe treated widows, not just in the past but in the present. Abigail, as a widow had no rights. She would not inherit her husband’s wealth; that would legally go to the nearest male relative. Widows are often outcasts in communities around the world, even today, having lost position gained through a husband. Suddenly, listening to my African friends, I got it and thought: This really is not an American story, is it?

The picture that came to my mind as my pastor spoke last Sunday was of a young man, “ruddy, and withal of a beautiful countenance, and goodly to look to,” deliberately stripping himself of all kingly regalia down to the kind of garments a working man might wear while breaking rock, or hauling grain from the field, or pushing felled and stripped logs toward a construction site.

Michal, David’s wife (also the daughter of King Saul, recently slaughtered in battle along with his sons), sees her husband dancing wildly in the streets and despises him. Commentators are often not kind to Michal—but her story is one of tragedy and agonizing family dysfunction. Remember, she had been torn from David and given to another man name Phalti, who followed her weeping when she was re-joined again to her first husband, now the king (see 2 Samuel 3:15–16).

I think Michal was a young woman corroded by depths of grief and shock. And there’s David, dancing in the streets before the crowd of joyful and ecstatic Israelites, bringing the Ark of the Covenant that had been stolen by Israel’s archenemies, the Philistines, back to the capital city (accompanied by some 30,000 able-bodied young men). Quite a picture.

The account in 2 Samuel tells us Michal despised David in her heart and says to him when he returns to bless his household, “How the king of Israel has distinguished himself today, going around half-naked in full view of the slave girls of his servants as any vulgar fellow would do!” There’s nothing like the sarcasm of a wounded woman. In other words, “I’m the daughter of a real king who knows how a real king should behave.” 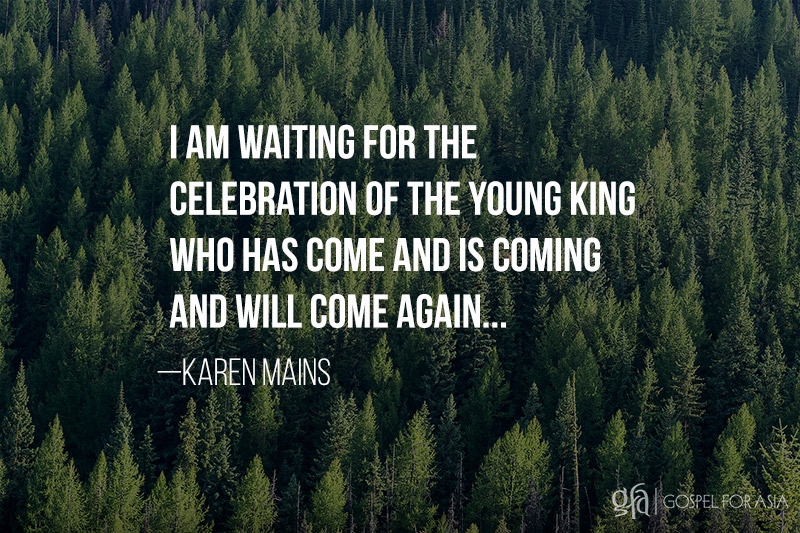 I wondered what would have happened if the young David (and remember, a handsome and athletic man) hadn’t stripped down to the work garments of the common laborer. I wondered if he hadn’t led the people into worship as a man among men, a herder of sheep, a slaughterer of giants with nothing but a stone and a slingshot as weapons. I wondered if the people wouldn’t have entered fully into worship, rejoicing and thanksgiving if their young king hadn’t brought the Ark of the Covenant—a symbol of the Presence of God—to Jerusalem as one of them, simply as a man among men.

David responds to Michal, “It was before the Lord, who chose me rather than your father or anyone from his house when he appointed me ruler over the Lord’s people Israel—I will celebrate before the Lord. I will become even more undignified than this, and I will be humiliated in my own eyes. But by these slave girls you spoke of, I will be held in honor” (see 2 Samuel 6:21–22).

How extraordinary: Young women, torn from their families due to war or raids, utterly subservient to the will of arbitrary masters and mistresses, vulnerable and without position of any kind, powerless as virtual slaves—these understand what David was doing.

If I have any insight into this passage, think of what it must have felt for them to see King David divest himself of the symbols of kingly authority, strip down to the garments of a common working laborer (like all those groaning throngs in Hollywood historical films showing the building of the pyramids, for instance). This act of David’s, if there is any truth into my flash of insight, said to them, “I am just a man like any other. All are welcome to enter into exuberant worship, not just the high or the mighty or the wealthy or the well-placed. The God of Israel is the God of all, even of the lowly, the humble, the abandoned, the ordinary. Come dance and worship along with me and let us together extol the King of Heaven.”

If I had been a lowly slave girl that day, I too would have held this young man in honor.

We are in the season of Advent. These are the four Sundays before Christmas that the liturgical church has set aside to get ready to celebrate the coming of Christ, the King. He too divested himself of His kingly glory and authority, took on human form (a common fleshly garment, if you will) and was born among a people enslaved in multitudes of ways. He came among us to show us how to live and how to love. He invites us into a holy dance of delightful obedience alongside Him that is always centered in a worship of the Presence of God, the Father.

His earthly life ends when, as a young man wearing only what some might call a linen ephod or at least the undergarments of a common laborer, He gives up His life on a cross so that we, slaves as we were, might enter completely with Him into what early church theologians have termed the perichoresis koinonia—an image of the Holy Three dancing in unending and harmonious relationship. 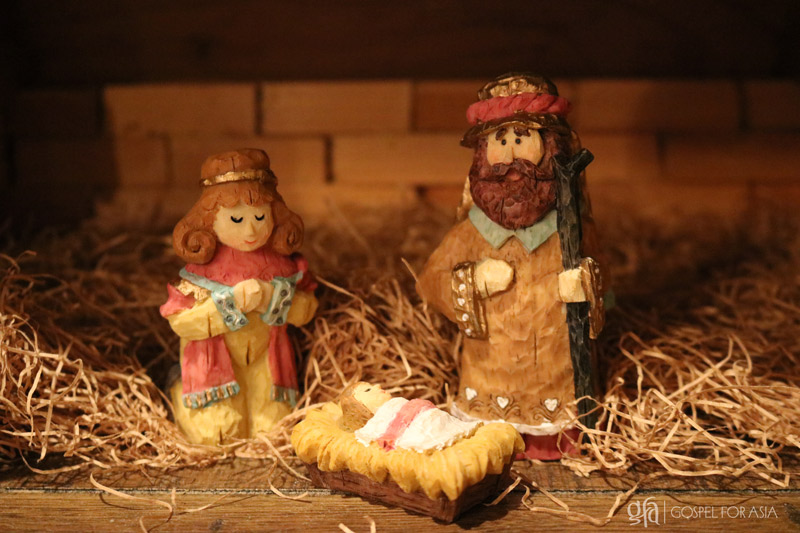 The church my husband and I attend is an inner-city church thronged with eager and spiritually hungry millennials. It’s worship is vibrant (and loud). Baptismal services are held frequently. Some 56 new believers were baptized on the recent Sunday set aside for this. But it is not a liturgical church; we probably will not observe Advent this December 10. But the Holy Spirit (or perhaps some stray imagining of my own) or the memory of the Scriptural insights from my African friends, or simply looking at a familiar Scripture (2 Samuel 6) with a little fresh understanding is making this Advent Sunday deep with meaning. I am thinking of a young man, stripped, dancing before his people.

And this week, I am practicing waiting. The Advent wreath I purchased the Friday after Thanksgiving stayed cool for a few days in the trunk of the car. But now it has taken its place on our coffee table. The fall arrangements with gourds and pumpkins have been changed with greens, a small Christmas tree and artificial vines of red poinsettias to set the Christmas mood. A nativity scene, handmade from rusted metal, will be placed on the planting table on the front patio next week. Red, battery-powered lanterns will light the sidewalk on Christmas Eve. I’ve purchased tickets to take my family to hear the concerto The Messiah.

These are preparations for the Christmas Day that is coming, but none are so powerful as the inward preparation I am making. I am waiting for the celebration of the young King who has come and is coming and will come again and who has divested Himself of royalty and taken on the humble garments of human flesh—so that we might learn to dance with Him one day in the unending celebration of the Kingdom of His Father. 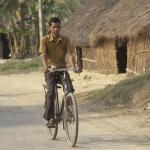 December 8, 2017
Christmas Gift of Hope on Wheels Means Family No Longer Suffers From Hunger
Next Post 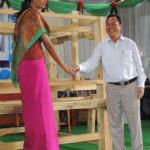 December 12, 2017 With My Husband Gone, What Will Happen to Me and My Son?
Recent Comments
0 | Leave a Comment
Browse Our Archives
get the latest updates from
What Motivates Us.
and the Patheos
Evangelical
Channel
POPULAR AT PATHEOS Evangelical
1