The “Blue Marble” photo of Earth shot from Apollo 17, the last of NASA’s Apollo missions as the rocket ship was hurtling toward the moon, wasn’t the first satellite image of our planet, but it was the first full image—stunning in color—taken from some 18,000 miles in space, with the sun fully illuminating Earth. The south polar ice cap, despite heavy cloud cover, was clearly captured, and the photo showed almost the entire coastline of Africa, extending from Antarctica to the Mediterranean Sea. Most of us who saw it at that time were stunned with how much water covered our planet.

This one single dramatic image eventually gave the name “Blue Planet” to our Earth, due obviously to the abundant water sources we could see on its surface. The photo was taken on December 17, 1972 and for all of us at that time, caught up in the exploits of the space discovery, it forever altered the comprehension of our planet. Now, when I think of Earth, and when hundreds of millions of others think of Earth, this is the iconic image that comes to mind.

This is an article about the global clean water crisis, about clean water, about water from a tap or from a glass, hopefully free of pathogens that bring disease. This is an article about clay pots and large plantain leaves and cupped dried gourds that hold rainfall hopefully untainted by acid effluvium. This is an article about pole wells drilled beneath polluted soil, and the unintended arsenic poisoning of villagers. This is an article about drying water reservoirs, about waste and sewage and chemicals polluting streams and rivers and major waterways. It is about encroaching urban development laying acres of implacable concrete and miles of roadways over land where rains can now no longer replenish water tables. It is an article about taking responsibility for that Blue Planet spinning alone, and as far as science now knows, unparalleled in our universe. No liquid water has been confirmed as existing on any other planet in our solar system. As yet, not a single drop of water has been detected anywhere in interstellar space. Scientists have determined that only a planet of the right mass, the right chemical composition and the right location can support liquid water; in other words, a planet like ours, the Blue Planet, this Earth.

That information alone should evoke awe when we look again at the ubiquitous reproductions of the Apollo 17 photo (identified by NASA as AS17-148-22727.) This image is perhaps best described in the spare language of Genesis 1. “In the beginning God created the heavens and the earth. The earth was without form and void, and darkness was upon the face of the deep; and the Spirit of God was moving over the waters … And God said, ‘Let there be a firmament in the midst of the waters, and let it separate the waters from the waters.’ And God made the firmament and separated the waters which were under the firmament from the waters which were above the firmament. And it was so.” The Creation account then proceeds with the regular, rhythmical and dynamic pronouncement of the Creator, “And it is good. And it is very good.”

Just imagine: God looking at the actuality of what that splendid photo AS17-148-22727 replicates. Who can refuse to admit to experiencing a similar and deep soul sigh, it is good. It is very good . . .? According to United States Geological Survey (USGS), “The Earth is a watery place. But just how much water exists on, in, and above our planet? About 71 percent of the Earth’s surface is water-covered, and the oceans hold about 96.5 percent of all Earth’s water. Water also exists in the air as water vapor, in rivers and lakes, in icecaps and glaciers, in the ground as soil moisture and in aquifers, and even in you and your dog.”

Samuel Taylor Coleridge’s poem “The Rime of the Ancient Mariner” captures the analysis of contemporary oceanographers, “Water, water everywhere.” And unfortunately, due to the stresses of climate change, rising seas, urban sprawl, lack of urban planning, spoiled springs and creeks and raging rivers overwhelming their banks and flooding, the rest of that poetic lament is becoming all too real, “And not a drop to drink.”

At the time of this writing, the world is watching the water distress in Cape Town, South Africa, where the taps are scheduled to run dry due to extended drought that has emptied the water reservoirs. In fact, experts tell us that this coastal paradise city is not alone in its water depletion extremity. Literally millions of people around the world live without sufficient access to water; over 1 billion people lack water supplies, and another 2.7 billion find it scarce for at least one month of the year. A 2014 survey of the world’s 500 largest cities estimates that one in four are in “water stress.” In fact, right now, there are 11 major cities on the Blue Planet that are most likely to run out of drinking water—exactly like Cape Town. Those cities are:

Studying this list makes one point crystal clear: Even if I (or you) may not be personally affected by water emergencies in the areas where we individually live, modern urbanized cities across the entire Blue Planet are now under water duress. They serve as the early warning systems that demand global attention! Attention! Attention! In addition, problems that were ignored 20 years ago are in need of urgent correction now, as are other situations that now need corrections in order to prevent water disasters in the near future.

The World Health Organization has made clean water a priority. According to the WHO Drinking Water Fact Sheet, “In 2010, The UN General Assembly explicitly recognized the human right to water and sanitation. Everyone has the right to sufficient, continuous, safe, acceptable, physically accessible, and affordable water for personal and domestic use.”

The American Society of Civil Engineers (ASCE) releases a yearly grade for infrastructure for the United States as well as a grade for each state. They gave the United States a grade of D+ for the year 2017. According to their report, this assessment for roads, bridges, airports, water systems, etc. is determined by measures like capacity, funding, operation and maintenance, and public safety.

These are the analytics that need to be explained in any discussions of America’s infrastructure hazards, and they are the modes for diagnosing our failing and crumbling public systems, upon which we are all dependent. Consequently, because of its looming water emergency, the thriving city of Cape Town has become the poster city for what, if the necessary correctives are not applied, will be water-scarcity crises duplicated in other large cities worldwide. Even now, that crisis is a reality for millions living in a world where the alarming estimate is that by 2025 half the world’s populations will be living in water-stressed areas.

“We are now limited to using 13 gallons of water per person per day. That’s enough for a 90-second shower, a half-gallon of drinking water, a sink full to hand-wash dishes or laundry, one cooked meal, two hand washings, two teeth brushings and one toilet flush.”

TIME Magazine’s reportage as to the causes of Cape Town’s severe water depletion point to several realities, which are also relevant to other urban centers. Climatologists at the University of Cape Town recognize that man-made climate change is a contributing factor in continuing drought patterns and warn that a drier future with increasingly unpredictable rain supplies is likely. It is generally agreed that the current water crisis is a result of what writers Mikhael Subotzky and Johnny Miller report is “a combination of poor planning, three years of drought and spectacularly bad crisis management. The city’s outdated infrastructure has long struggled to keep up with the burgeoning population. As dam levels began to decline amid the first two years of drought, the default response by city leadership was a series of vague exhortations to be ‘water aware.’”

In February 2018, Cape Town’s mayor’s office announced more stringent water restrictions: “We are now limited to using 13 gallons of water per person per day. That’s enough for a 90-second shower, a half-gallon of drinking water, a sink full to hand-wash dishes or laundry, one cooked meal, two hand washings, two teeth brushing and one toilet flush.” The warning in the TIME article is this: “What is happening to us in Cape Town might not be an outlier. It could happen to you too.”

April 12, 2018
Safe, Clean Drinking Water at Risk for 12 of the World’s Major Cities
Next Post 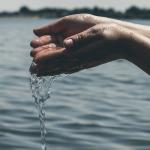