WILLS POINT, TX – Gospel for Asia (GFA World) founded by Dr. K.P. Yohannan – Discussing the impact a local Gospel for Asia-supported pastor brings to the people around them, where every conversation and time spent, even giving a motorcycle ride can mean a life changed for Christ.

Niket gazed wearily up the road, hoping he wouldn’t have to wait much longer for an auto rickshaw to come along. It had been a long day, and he just wanted to get home. A few minutes later, he heard a motorcycle approaching. When the bike came closer, Niket saw the driver wore a bag slung across his shoulders and recognized him as the local Gospel for Asia-supported pastor, Danvir.

Deciding to take a chance, Niket stepped out and motioned for the man to stop. Because they were both headed in the same direction, he asked Pastor Danvir if he could have a ride back to their village. Niket didn’t fully expect to be helped, but to his surprise, Pastor Danvir happily agreed.

Niket mounted the motorcycle, touched by the pastor’s kindness. But when he reached his destination and climbed off, he was thankful for something even more unexpected: the gift of eternal life.

Words on the Road

Pastor Danvir was a busy man. Caring for the believers in his congregation and serving the neighboring communities meant he frequently journeyed from place to place. His motorcycle enabled him to do that much faster than if he had to walk, ride a bike or wait on public transportation. It helped him in his ministry, and on this day, it was the main reason why he had a chance to speak with Niket.

After agreeing to give Niket a ride, Pastor Danvir naturally struck up a conversation to get to know the man sitting behind him. As they talked, Pastor Danvir shared some encouraging words about Christ. God moved powerfully in Niket’s heart, and when the motorcycle stopped at their destination, Niket asked Jesus to lead his life and live in his heart!

Niket invited Pastor Danvir to visit his home, and when the pastor came later that week, Niket’s wife, Abia, listened intently. She, too, felt God working within her, and she joined her husband in placing her faith in Christ.

Niket and Abia began worshiping God with Pastor Danvir’s congregation and developed a strong prayer life—and it all started with the simple generosity of a man with a motorcycle.

Read about the lasting impact of another pastor’s simple gift for a widow.

Source: Gospel for Asia Reports, The Best Motorcycle Ride of His Life 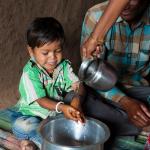 March 24, 2020
Gospel for Asia Warns Coronavirus Could Intensify Due to Global 'Handwashing Crisis'
Next Post

March 28, 2020 A Gospel for Asia Gift of Compassion Fills Bare Home with Joy
Recent Comments
0 | Leave a Comment
Browse Our Archives
get the latest from
What Motivates Us.
Sign up for our newsletter
POPULAR AT PATHEOS Evangelical
1

A Sign of the Times: When...
The Chorus In The Chaos
Related posts from What Motivates Us.