‘I Will Be Their Daughter’ Gospel for Asia-Supported Missionary Becomes Like Family to People Suffering from Leprosy May 13, 2020 GFA Staff Writer

WILLS POINT, TX – Gospel for Asia (GFA World and affiliates like Gospel for Asia Canada) founded by Dr. K.P. Yohannan – Discussing Sakshi, the pain and suffering she went through from contracting leprosy as a teenager, and the calling she now lives in sharing healing and compassion for leprosy patients as a Gospel for Asia-supported Missionary.

“Don’t open my bandage!” the leprosy patient cried out. For years the patient believed it was because of their sin that the destructive disease controlled their body. Now, they thought they must suffer and settle with bearing it alone.

With love and deep understanding, Sakshi, a Gospel for Asia-supported missionary, revealed her own hands and feet to the patient, deformity clearly marking what leprosy’s nerve killing illness left behind.

“No, no, this is not some sin,” Sakshi said. “I myself have gone through this.”

The unique compassion for leprosy patients came from Sakshi’s own storehouse of experience. She too had wrestled with the same hurts, rejection and suffering from this disease. It came the hard way, but God used leprosy for Sakshi’s good and for the healing of many broken and lonely people.

As a teenager, Sakshi found out she had leprosy. Being the oldest child, it was a sudden shock when her brothers and sisters, who usually looked up to her, abruptly pulled away and wanted nothing to do with her. It was a harsh transition she had no control over.

Many thoughts of what life would be like from now on flooded Sakshi’s mind. Now she wouldn’t be able to visit neighboring homes, and no one would want to be her friend anymore. The sorrow of rejection enveloped her and put her in a place of deep depression. She began to wonder why she should live any more. Who would love her and care for her now?

In her hopelessness, Sakshi tried to hang herself. Thankfully, her father saved her and spoke words of life into her weary soul. He told Sakshi she was a precious child and urged her to strengthen her heart through the pain and hardship.

“So my papa was becoming so much a comforter to me and he comforted me and even my brother and sister, they used to hate me, and they don’t want to talk with me, they were not in home at that time when I was doing all these things,” Sakshi shared. “So my father, he saw me and he pulled me from there, and he made me understand everything, and after that I became ok.”

After the conversation with her father, Sakshi gave up trying to end her own life, but she still felt alone and worried. Others said it was her fault she contracted the disease, and Sakshi began to believe it.

As days, months and years went by, the leprosy in her body grew worse. One of Sakshi’s fingers bent in an awkward position, and she had terrible pain in her leg. Doctors encouraged her to go through with amputating her leg, but that frightened Sakshi. It was this time in her life when she met a few Gospel for Asia-supported missionaries who encouraged her and prayed for her. They shared about the love of the Healer, and Sakshi began to pray in faith and ask Jesus to heal her own body. By God’s power and grace, a miracle happened and Sakshi was healed from leprosy!

Immediately after she was healed, Sakshi decided to serve the Lord full time. She attended a Gospel for Asia-supported Bible college, and after graduation, her heart’s desire was to serve in the leprosy ministry.

Touching the Untouchable and Despised

“Nobody is there to comfort [the leprosy patients] and to give any kind of encouragement,” Sakshi explained. “Nobody wants to love them, hug them or to come near to them to dress them.

“…They have so many inner pains in their heart, because they also are human beings. They also need love, care and encouragement from other people.”

With Christ’s compassion and love and with true understanding from her own experiences, Sakshi served the patients as though they were her own relatives.

The Lord healed the wound of rejection that had cut into Sakshi’s heart as a teenager. She suffered pain and hardship, but she could later tell her story to those who are walking in shoes she once walked in.

By helping them with housework, giving hugs, washing clothes and combing hair, Sakshi helped these precious patients see they are not forgotten by God and are created in His image. These simple acts of kindness mean the world to these who are often forgotten or thought of as being void of emotions and feelings. Sakshi understood this, and God has used her testimony to display the hope and true unchanging love of Jesus to the unloved.

“I know that God will love them,” Sakshi said. “As God loved me and He healed me, in the same way I want to love them.”

Display the Compassion of Christ

In Mark 1:41, Jesus, moved with compassion, stretched out His hand to a man with leprosy and healed him. You too can be part of ministering to these precious people who will hear, some of them for the first time, that Jesus loves them and is not afraid to touch and hold them. Show Christ’s compassion through Gospel for Asia’s leprosy ministry!

Source: Gospel for Asia Featured Article, I Will Be Their Daughter 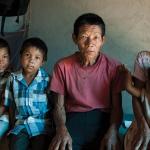 May 11, 2020
How Gospel for Asia Provides a Safe Place for Tea Estate Children
Next Post 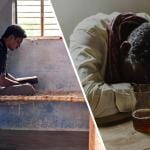 May 15, 2020 Family Healing Begins When the Alcoholic’s Son Prayed
Recent Comments
0 | Leave a Comment
Browse Our Archives
get the latest from
What Motivates Us.
Sign up for our newsletter
POPULAR AT PATHEOS Evangelical
1