WILLS POINT, TX – Gospel for Asia (GFA World and affiliates like Gospel for Asia Canada) founded by Dr. K.P. Yohannan – Discussing Biju whose peaceful life was interrupted after being diagnosed with leprosy, and the Gospel for Asia-supported pastor who shared the healing and love of God.

Biju loved his peaceful life in the rural farmland of his family. He grew up devoted to the traditional gods of former generations and passed on this heritage to his three children. His family was not rich, but they were happy.

Biju’s peaceful life was marred when he started to notice an odd feeling in his fingers. He ignored the strange sensations and continued to work hard on his farm. As time went by, the sensations became more frequent. Eventually—when his fingers became permanently numb—Biju knew he could no longer ignore the problem. At the hospital, Biju was diagnosed with leprosy.

After Biju was diagnosed, the worry he shook off before became a permanent resident. Fear crept in when the medications the doctors prescribed did not help Biju. He became more and more desperate, seeking the help of witch doctors and shrines in the hope of a cure. As a last resort, Biju traveled abroad for an expensive treatment, but the efforts were useless. After spending a small fortune, Biju returned home and lost all hope of recovery. He spent his days contemplating the hardship of spending the rest of his life in a leprosy colony.

One day, a visitor came to Biju’s home to tell him about another possible cure. Biju listened to the visitor share about a pastor in a nearby village who had prayed for people with ailments and many of them got healed. The visitor urged Biju to go see the pastor, declaring Biju would surely be healed through prayer. This went against every conviction Biju held dear and trained his children in, but as he thought over the many places he had visited for healing, he realized he could not reject this final hope for a normal life. Weary and willing to try anything, he decided he would visit the pastor just once for prayer.

A Cure for More Than a Disease

The next Sunday, Biju and his family attended the worship service led by Gospel for Asia-supported pastor Rubin. After the service, Pastor Rubin greeted the new family, and Biju told the pastor exactly why they were there, sharing the whole history of his disease and search for healing. Pastor Rubin talked to Biju about how much God loves him and how, when Jesus was on earth, He touched and healed people with leprosy. The pastor encouraged Biju to believe Jesus could heal him and to trust in the power of Jesus’ blood.

Biju, hearing the Word of God for the first time, had faith that Jesus would heal him. Pastor Rubin prayed for Biju earnestly and gave him a bottle of oil to apply to the affected areas of his body as an act of faith. Biju returned home and faithfully applied the oil to his broken body. He kept going to prayer meetings and also welcomed Pastor Rubin into his home for prayer.

Biju’s faith in Jesus grew while he diligently sought God in the Bible and in prayer. Gradually, Biju saw changes in his body. His leprosy symptoms slowly disappeared until he was completely cured of the disease.

Although Biju had asked God for healing, his miraculous healing still amazed him. After experiencing this wonderful act of God, Biju and his whole family trusted in Jesus.

Biju’s life is full of peace once again. But this time the peace runs deeper, and he knows it will continue for eternity.

Read what happened when a woman who lived with leprosy for more than 25 years met Jesus. 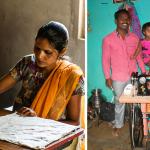 May 1, 2020
Gospel for Asia-Supported Gifts Boost Village Income
Next Post 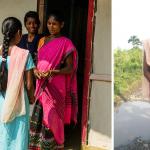 May 6, 2020 Gospel for Asia Supported Woman Missionary Brings Healing for a Broken Home
Recent Comments
0 | Leave a Comment
Browse Our Archives
Follow Us!

Will sin be possible in the Kingdom of...
In our study of Heaven for the Good News sermon series, one...
view all Evangelical blogs
What Are Your Thoughts?leave a comment
Copyright 2008-2020, Patheos. All rights reserved.