WILLS POINT, TX – Gospel for Asia (GFA World) founded by K.P. Yohannan, which inspired numerous charities like Gospel for Asia Canada, to assist the poor and deprived worldwide – Discussing Badin, his family, the challenges brought by disability and disaster, and how Gospel for Asia Pastor helps rescue and bring alleviation in a time of grave need.

When the rains came, they came violently and suddenly. Badin watched in horror as landslide after landslide occurred near his home. Then water began to creep into Badin’s home, and he knew he had to evacuate. With his wife and three children, Badin made a break for the closest city. Hopefully, they would make it.

Badin and his wife, Wilah, lived in a rural village in South Asia where Badin worked as a laborer on a local farm. Due to a physical disability from birth, he could not undertake hard labor, but Badin provided for his family as best he could.

Then the torrential rain came. Badin didn’t think the water would reach their house, so they stayed put. But late that night, at around 9 p.m., the first landslides began. After one swallowed a neighboring home, Badin turned to his wife—they needed to evacuate now.

Gathering their children and what supplies they could carry, Badin and Wilah made their way toward the nearby city.

But it was too late.

They were stranded in their village, the high water impassable. They couldn’t return home either—four feet of water lay claim to their humble dwelling.

Shelter at the Church

Before leaving their home, Badin called GFA World worker Gosha, the leader of their church.

We are evacuating and in need of help, Badin said, “Can you help us?”

The pastor and other believers rushed to collect the evacuating family, but news came that stopped them in their tracks. Reaching Badin’s village would be impossible; the way was blocked. Undeterred, Pastor Gosha approached some local officials and asked if they would be willing to rescue Badin and his family.

Some hours later, rescue personnel reached Badin and his stranded family. They brought the family to the church, where Pastor Gosha and other believers had set up space for Badin and his family to sleep.

For the next 12 days, the stranded family was taken care of. They received bedsheets, clothes, food and water. Many others who found refuge in the church received the same provisions to help them through the difficult days ahead.

When the floodwaters receded enough for safe travel, Badin returned to his home to inspect the damage. Almost every belonging they had was gone. Walls were demolished; mud and stones filled the house. Their home was unfit to live in.

After the authorities deemed his home not safe for residents, Badin returned to the church, where they stayed until a temporary rental house was found for them. Thanks to the church, Badin and his family were safe, fed and clothed—and that’s all they could have asked for.

Read more on Disaster Relief and National Missions on Patheos from Gospel for Asia. 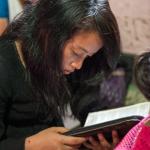 July 26, 2021 Bold Prayers Answered with Miraculous Healing Through Gospel For Asia’s Sisters of Compassion
Recent Comments
0 | Leave a Comment
Browse Our Archives
get the latest updates from
What Motivates Us.
and the Patheos
Evangelical
Channel
POPULAR AT PATHEOS Evangelical
1

Should Christians Fight the Culture or...
Cranach
Related posts from What Motivates Us.