My father was, what I call, an “Ooh look shiny!” person.  He was a collector of pretty things, a bower bird, an amateur jeweller even.  He would collect all sorts of things, gems and stones first and foremost – his father was an opal miner and my dad used to go on opal mining trips with his father and family as a child, so of course he was obsessed with opals and other gems.  Woods were another of his “things” he would carve them and create things, walking canes, a staff, wands, fighting sticks among other things.  He self-taught to create certain types of chains out of wires.   He also collected religious and esoteric types things – crucifixes and rosary beads, the pentagram I have worn on my neck for a decade now, even a glass wand (and I already said he carved his own wooden wands, though I am not sure where they are now).  He was a collector, a creator – he was so obsessed with it that he would carry a case of sand papers and polishing cloths and he would polish random gems and things everywhere he went.  It was his own version of everyone elses obsession with their phones.

He died last year, on May 15th.  It’s the first anniversary since.  So I thought it would be nice to do this post today, showing a little of how I incorporate his memory and life into my practice.

When he died I acquired a small amount of his collection (which is still a lot), but given that I have young children and now a crawler who eats everything – the only place I could safely store and display his stuff was in an out of the way place.  My house is odd, it has a few rooms that are converted verandahs, leaving them quite long but also narrow, maybe twice the width of the average hallway.  All they are good for is storage really, and it is in one of these that I display his stuff.

I have a spare table against the end wall, taking up almost the entire width of the room and in front of that I have a dressing table, which is the width of the room.  These began as a place to display my fathers stuff and other things I felt were awesome, important or special (and unsafe around my monsters).  I also use the drawers to store things like candles, incense, oils and the like.  Over the past year I realised that in this I finally had the space, the safe place, the opportunity to create a proper altar.  And so it has slowly developed (and is still developing) into just that – my altar and shrine.

The table at the back with the black cloth is the shrine.  It’s a mixed shrine, which in Hellenismos is fairly normal, for home shrines anyway.  The ancient Hellenes would have home shrines dedicated to more than one deity, heroes, nymphs and other beings, and ancestors.  So my shrine of necessity is also quite fitting for my religion, which is handy.  The focus is mostly on Hekate and the dead, but will include Hermes, Agathos Daimon and perhaps Hestia – if I don’t set up a small shrine for Hestia in the kitchen that is.

The dressing table is at the front and this is my working altar.  Handily it is divided into three parts, above the drawer sections.  The wooden top in the middle and then glass tops to either side.  The middle is my main working area, the two sides are for still current but not at this minute stuff – so long term workings for the most part but also for preparations.

It’s not complete, obviously, and it’s not as neat or organised as I would like it.  It’s still a work in progress – and it’s been a long time since I had an altar and ever had a proper shrine, so in a way it’s all new to me.

The only real problem I have with this space is the height – they are actually a little low to the ground, which means I generally end up on my knees to work, despite the fact this is not correct in Hellenismos.  The Theoi don’t desire abasement positions – except when absolutely necessary – so it’s not good.  But, I can’t kill my back by leaning over constantly.  I am sure they can tell the difference between abasement and laziness though.

A lot of the stuff in the middle of the shrine is from my dad.  A whole heap of stones, mostly black because I like black stones – and they are generally considered sacred to Hekate.  A few crystals, amethyst, quartz and the like.  A metal arrowhead.  A key, for Hekate of course.  A red glass apple, which is my own personal symbol but also a symbol of Hekates.  My dads glass wand is to the right, next to some peacock feathers.

At the back are two obelisks I won in a competition and between them is an anti-aircraft bullet, empty, it was my dads – no he wasn’t in a war but his dad was, and he has had the bullet for as long as I can remember, it’s very much a family remembrance thing.  Of course there is a bell.  And there is a test tube there too, which contains some of my fathers ashes.

The right side of the shrine.  Again you can see the glass wand and the feathers.  A necklace of a crescent moon, Hekate symbol.  A picture of Hekate – since I can’t justify spending so much money on statues just yet.  A small white owl, Hekate symbol – there is another on the left side as well.  And a pink skull, which is a decanter – there is a second on the left side as well.  These I will be filling soon, one with olive oil and the other with wine, for offerings.

The left side of the shrine, with another picture of Hekate, and the second of the skull decanters and little white owls.  To the front there is another key, for Hekate.  A small pentagram stone.  And at the back is my “cauldron” – which is actually a cast iron fondue set! I got it secondhand, $8, and is perfect for burning offerings or loose incense.

As you can see this dressing table is kind of divided into three pieces.  In the middle it is basic wood, the top of the drawers, but to each side it is topped by glass, creating shelves underneath.

The central part is my main working altar.  Candles for immediate burning, incense tray for stick incense, a small vase, a shot glass for use in libations – yes I have the decanter, however, while Hekate is generally a Chthonic deity, She is also Ouranic, which means She doesn’t always need holocaust offerings (complete, no leftovers).  When offering to Ouranic deities, the leftovers are generally consumed by the offerer, ie. me.  I hate wine, so a few drops out of a shot glass is preferable to an entire decanter!

The strophalos plaque I recently made is at the front, I obviously haven’t hung it up yet.  When doing burnt offerings I will place the “cauldron” from the shrine on the plaque – if it is to Hekate.  Otherwise the plaque is moved.  The clear bowl to the right of the plaque is for offerings that are not to be burnt, those that will be taken outside and left at the crossroads or wherever appropriate for the deity in question.  It too is placed on the strophalos plaque when being used – unless it is an offering for other than Hekate.  The clear bowl has proven problematic – it is where some cheeky mice have stolen offerings.

Now to the sides of the altar.  On each side you can see square black candles – still wrapped and quite dusty.  I will be fixing that soon. And two small lanterns that hold tea candles – they will be moved to the shrine, but for now they are awaiting use for the Rite of Her Sacred Fires this full moon.  On the left side is a glass bowl in a stand, that is the bowl for Khernips, or lustral water, which is used for ritually cleansing the hands and face before ritual – to clean away miasma, which is, in simple terms, the dirt of life, stress, negativity and such that is on all of us all the time.

You can probably also see under the glass bits a few things sitting on the shelves.  Some oils on the right, and a lovely little besom on the left, as well as part of a candle holder that I really need to move elsewhere.

So that’s it, that is my still developing shrine and altar area.  Even though it is still in development, I am relatively happy with how it currently is, it is functional and holds meaning and remembrance, and that’s what matters most. 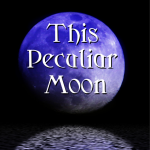 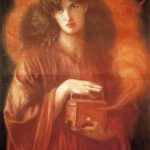 May 17, 2016 Not All Pagans
Browse Our Archives
get the latest from
Pagan
Sign up for our newsletter
POPULAR AT PATHEOS Pagan
1