The Moon is a big part of most Paganisms and the lives of most Pagans. You will see the information everywhere about the New, Waxing, Full, Waning and Dark Moon and all their associations and symbols, deities and correspondences. But there are things that I rarely hear about in Paganism, things that make me curious.

I am not going to guess what these things might mean, what correspondences we might apply to them as Pagans, within our multiple religions. But I am curious about them and I wonder what they could mean. Especially when two of these happen upon curious moments in this year.

Most seasons, from solstice to equinox, or equinox to solstice, have three full moons, because the seasons last for approximately three months. Because of the unequal timing between the sun and the moon (our solar based years do not match up with the lunar months) a single season does not actually equal three lunar months, only three “solar months”. There are more than 3 lunar months in a season, not much more, but it is still more. If it lines up right…

We get four full moons in a single season instead of three. When this happens, the third full moon of that season is the blue moon.

This is the original and old blue moon. Since the third full moon of four in a season is the blue moon, this means they always occur about a month before the solstice or equinox and can only happen in February, May, August or November. The reason the third moon is counted as the blue moon is actually due to the Christian calendar, it’s all about the timing of Easter based on the Paschal moon.

The new blue moon seemingly arose out of a misunderstanding. An amateur astronomer, using information that was missing pieces, made a logical assumption and wrote about it in an article about the blue moon in Sky & Telescope.

Accordingly, a blue moon occurs when there are two full moons in a single (named) month. The second of those full moons is the one called Blue Moon.

Though this is the new version, it is just as rare as the seasonal blue moon, and it is also the more well-known version, so it is truly up to the individual which blue moon they which to observe, if any, or perhaps both.

The monthly blue moon usually means something else which is just as interesting to me.

Our solar based year does not match up perfectly with the lunar months. One lunar month takes about 29.5 days, give or take about 6 hours. This equals out to about 12 and a half lunar months in a single year. A bit more than our Gregorian solar based months.

Generally, in a single solar year, from January to December, there will be 12 full moons. But, because there are actually 12.5 lunar cycles in those 12 months, we will occasionally get it all lined up perfectly so as to have 13 full moons in the year.

Most years in which we have a monthly blue moon will also have 13 full moons in the year – unless of course there is a missing full moon.

Similarly, the tropical years (that is the seasonal years, say winter solstice to winter solstice) also hold, usually, 12 full moons, but, as with the normal year, can occasionally have 13 full moons.

It is possible, but even rarer than either type of blue moon, for both types of blue moons to occur in a single year. For this to be possible there must be 13 full moons in a calendar year, but also 13 full moons between two December Solstices.

That is a lot of focus on the full moon, which stands to reason, it is the most noticeable of the lunar phases and evokes all sorts of wonder and awe in a person. But within much of Paganism there is another moon phase that is just as important as the full moon.

The Dark Moon (or astronomical New Moon). Just like the full moon can be seen twice in a single month, or season, or missing from a month and be counted 13 times in a year – so can every other lunar phase, and this includes the dark moon.

So it is that the relatively new term of Black Moon refers to several of these things, just like blue moon has two meanings, so the black moon has several meanings.

But there are two other things that can be referred to as the black moon.

The lunar month never reaches a full 30 days, it is always at least a few hours short. This means that there must be at least one of each moon phase in every month. Unless, of course, that month has less than 30 days.

Those years would be especially interesting I think – 13 full moons in a year, no full moon in February and 2 monthly blue moons.

When February is missing its full moon, some people refer to the dark moon of that February as the black moon. I can’t really agree with this terminology though. The dark moon is not doing anything special in this month, it’s the full moon that is “doing” something special. I could agree with the name of Black Month or Black February though – these or similar would make more sense.

Similar to the above missing full moon in February, so it can happen that February has no dark moon. Some people call this a black moon.

And once again I cannot bring myself to agree with the terminology being used here. There is NO dark moon in this month, so which moon, which date exactly is the black moon happening? The fact there is no dark moon actually means that February is filled with bright moons, sure some of those moons are almost dark, but they have those slivers of waxing or waning, they are still reflective moons, still bright, still visible. A month full of visible moons hardly conjures the idea of darkness or blackness. A bit of a misnomer in my opinion. If anything the month should have a label to do with brightness and light, not blackness and dark.

These don’t include exact dates – because of time zone differences, I felt it best to just mention the months for better accuracy.  It may also not include all dates.

Something that stood out to me about these dates, are the ones for this year, 2016. We have a seasonal blue moon in May – which happens to coincide with The Rite of Her Sacred Fires, the internationally observed ritual in honour of Hekate Phosphorous. And we have a monthly black moon in October – here in my time zone, that black moon happens on Halloween, which is also Beltane – perhaps this would be more significant if it was Samhain here in Australia, but it’s still curious either way.

I can google search all of these moons and I certainly find a few Pagan sites that give information about them, how they correspond to Paganism. But there isn’t a whole lot out there. From what I can tell, it’s because there isn’t much agreement on what they all mean. These are relatively new observances – even the seasonal blue moon is only 400 or so years old, as something that has been noted by humans (obviously it happened before we started paying attention though). Because they are mostly new things, that means we don’t have much in the way of old lore to draw upon.

Pagans Path mentions that to some Pagans the (monthly) blue moon represents a so called Grandmother Goddess – which is a merging of all three parts of the Triple Goddess. Others see the blue moon as representing the transition of Crone to Divine. And still others see the blue moon as a time of clearer communication between mortal and divinity. Whereas About Pagan/Wicca mentions that, though there is no overall significance to the blue moon in Paganism, some individual covens will perform initiation rituals only during a (monthly) blue moon.

I was linked to one site (not in English) that discussed the idea that there is no blue moon at all.  The writer speaks of the fact that we are comparing lunar months to solar months, and that really isn’t anything special.  After all, we created the solar months! However, I note they did not take into account the seasonal blue moon, which is not based on human months but on the astronomical seasons.  So when it comes to natural phenomena, the seasonal blue moon is real.

The black moon has almost nothing that I can find in Paganism. Nonetheless I did manage to find one site that had some information on it. But that was it, that was all. Of course, the fact that Google interprets my search of “black moon” as synonymous with “dark moon” doesn’t exactly help me much.

Thirteen moons in a year is annoying, because I can’t find anything about it. Again, this is perhaps not because it doesn’t exist but maybe because within Paganism a lot of people observe the 13 named moons – those 13 moons in a lunar year. So, searching for 13 full moons alongside Paganism pretty much only brings up those folk moons.

I can’t really say what significance all these moons hold to me. To be honest, despite writing this post and finding these moon phases fascinating, I haven’t really thought about it all on a personal level for my own religion. I am not sure I would know how to start figuring it out.

Do you know of or observe any lore in regards to these peculiarities of the moon? 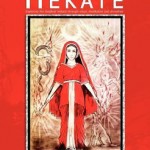 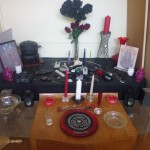 May 16, 2016 Shrine and Altar
Browse Our Archives
get the latest from
Pagan
Sign up for our newsletter
POPULAR AT PATHEOS Pagan
1

The Toxicity of Crystals and Ways...
Keeping Her Keys
Related posts from Hearth Witch Down Under 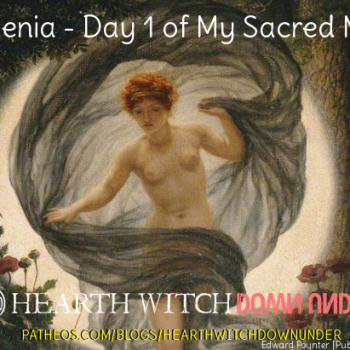 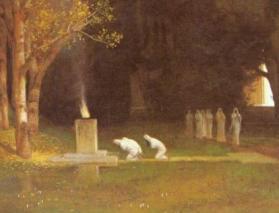 Between Two Worlds: The Key of Pain
I noticed my back pain wasn't going away. I asked Hekate for...
view all Pagan blogs
Copyright 2008-2021, Patheos. All rights reserved.