Cultural Appropriation and Lines in the Sand

Cultural Appropriation and Lines in the Sand September 30, 2015 Molly Khan

Let me just state upfront: I absolutely believe cultural appropriation is A Thing. It happens, it’s bad, and I think Paganism would be a better umbrella without it. But I also believe there are some distinctions that are worth teasing out within the big Cultural Appropriation label that help get to the heart of what it’s really about.

Just to be perfectly clear: I am a white woman. Though I grew up with some vestiges of German culture from my grandparents and great-grandparents, I am entirely a product of Midwestern America and its culture. Also, I’m not an expert on cultural appropriation – please consider the voices of people of color and other marginalized groups before considering my own.

The argument I keep seeing against cultural appropriation, most recently put forth by fellow Patheos blogger Tom Swiss, is the idea that people (or apparently, cultures) can’t own ideas, styles of clothing, hairstyles, or even religious rituals or beliefs. And of course, in many ways this is true. Cultural exchange happens, ideas and thoughts get swapped back and forth, and in many ways this is how cultures grow and become more sophisticated.

Imagine a Midwestern American like myself travels to Britain, takes a few culinary courses, and then returns home to Nebraska to open what he touts as an ‘authentic British pub’. Is he being dishonest in his advertising? Probably, and that’s not awesome. But is he damaging the cultural identity of British people? Are people likely to take this image of British cuisine and use it to perpetuate false ideas about the British people that will affect and harm them every day? It doesn’t seem likely.

Now think about all the false images we are bombarded with about, for example, Native Americans. This isn’t just one guy opening a misrepresented restaurant – this is a culture-wide saturation of stereotypes that are hurtful and wrong. Disney’s Pocahontas was one of my favorite movies when I was a child, presenting me with this lovely image of a magical culture so in-tune with nature and the world around them, living in perfect harmony with the world.

Generally, it portrays the Englishmen in a much worse light, but white children didn’t grow up thinking all Englishmen were ridiculously greedy and hated nature – because these children were white, and they knew many white people of varied personalities, so of course not all white people are like that. But generally these children did not know many Native Americans, were not presented with diverse stories of Native American people and their lives, and so it became simple to accept Pocahontas‘s stereotypes as accurate portrayals of all Native peoples.

This is cultural appropriation. When you take a culture, portray it inaccurately or even one-dimensionally, and there are too few people or their voices are too silenced to be heard, then you are creating a false image of that culture that is damaging – whether you think the portrayal is positive or not. This is what happens when the Pagan community takes over a term like ‘shamanism’ – that word has a meaning, a context within its original Siberian Tungus culture, but so few people know what that even is! The word has been taken and packaged and applied to practices and cultures that have nothing to do with its original use. Even more alarmingly it has been applied to practices of other cultures, like those of some Native American groups, who also don’t have the ability to speak loud enough to protest this mis-labeling of their spiritual practices.

This concept of power dynamics is what also makes it impossible to appropriate from Heathenry or Germanic cultures. First of all, despite what some Heathens would like to believe, modern Heathenry is not a culture in the way that the Saami or Pakistanis are. We are a religious group, with rather loose affiliations at that. Black people, people of Asian descent, anyone can call on the Nordic Gods because the culture that gave rise to those deities is effectively dead, having been evolving for over a thousand years.

Yes, sometimes people use runes without knowing much about their historical and cultural background. Yes, sometimes people call on Odhin and Poseidon together in a ritual. By and large, the people doing these things are white Americans, products of American culture – and generally, the Heathens who complain that their culture is being appropriated are also white Americans. These people are part of the same culture, have the same power dynamic between them.

In the end, I can’t say that any culture owns an idea or a style or a religious ceremony. It comes down to respect. Do you respect the struggle of marginalized peoples? Then don’t take their things. 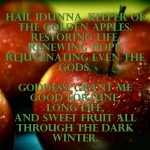 September 28, 2015
The Season of Apples Comes Again
Next Post 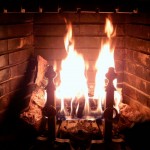 October 2, 2015 A Winter Prayer to the Fire
Browse Our Archives
get the latest from
Pagan
Sign up for our newsletter
POPULAR AT PATHEOS Pagan
1

Mabon: The Most Pressing Issue of...
Raise the Horns
Related posts from Heathen at Heart