When UPG Trumps the Lore

This is the month when many Anglo-Saxon Heathens (and many Pagans in general) focus on Eostre, and so I thought I’d be a bit stubborn and write about a deity associated with March by the Venerable Bede.

I’ve written about Her before, covering most of the lore and speculation that’s available to us at this time, and I’ve lamented its utter incompleteness.  How is it that Eostre, with basically the same amount of information relating to Her, became such a central figure in the Pagan springtime festivities while it’s difficult to find even Heathens who know who Hreda is?

My personal opinion is that Eostre’s associations are just easier to understand for us in English-speaking, Christian-heritage countries.  Everyone in this culture knows Easter and all that it entails, and since the Goddess Herself lent Her name to the festival – the connections are readily made.  Hreda has no such similar festival, no cultural markers that I’m aware of to lend Her importance in our modern age.  But that doesn’t mean She’s not there, waiting.

My devotional relationship with Hreda has been something of an experiment for me.  I’m usually pretty hidebound when it comes to matters of lore; I’ll build a practice up around it using some UPG, but in matters of disagreement?  The lore wins hands down.  It’s one method I use as a check and balance.

But for Hreda, we have less information than even Nerthus; only a possible etymology, and even those are conflicting.  Is it ‘swift’, ‘glory’, or ‘victorious’ – each of these have such different implications as to the kind of deity She could be.  And maybe the etymology matters not at all, and it’s just a name unrelated to Her function or areas of interest.  We just don’t know.

And so I reached out to Her.  This has been going on for a few years now; Her presence is certainly strongest for me in March, so that’s when I get my best ideas of Her.  Each year, consistently, I find Her in the wind that drives out the winter.  All of a sudden, around this time of year, the winds start shifting.  Instead of howling out of the north biting cold, they begin to blow up from the south.

They are no more gentle – in fact, often the winds are strongest this time of year.  But the southern winds don’t carry snow and ice; they tend to drive away the clouds so that ever-earlier rising sun can shine down on the land.  To me, these winds are a manifestation of Hreda.  She is swift.  She is victorious (eventually!).  She drives away the clouds to reveal the glory of the light. 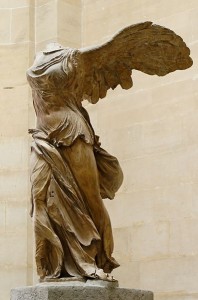 Every time I think of Her, I am reminded of a particular statue that I loved in my art history class, The Winged Victory of Samothrace.  I am not a Hellenist and don’t know the story behind the statue, but when I think of Hreda it is forcibly brought to my mind.  The way She stands, leaning into the wind, the raggedness of Her clothes and feathered wings – She fights a long battle, but She is not cowed.  She is Victory.

Just to be clear – there is absolutely no indication in the lore that Hreda is this kind of deity.  I don’t know much about British weather, but I think this time of year is usually much more mild than it is on the plains of the Midwest, so it doesn’t even hold up historically.  I don’t care.

I have been reaching out, making offerings, honoring Hreda for five years now; and this is how She comes to me.  I won’t argue with anyone over their personal interpretation of Her.  At this point, I’m not really up for arguing with anyone over my interpretation of Her.  She is who She is to me, and I could not be more grateful for the gifts She brings and Her influence in my life. 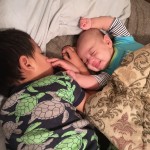 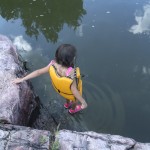 March 6, 2017 Welcoming Children (And Their Parents) To Ritual
Browse Our Archives
Related posts from Heathen at Heart