One student’s stand for faith in public school brought him to the White House [video] March 3, 2020 Bethany Blankley

One of the young people who joined President Trump at the White House on National Religious Freedom Day this year was Chase Windebank, son of Ken Windebank, Chief Operating Officer at Focus on the Family.

Chase was invited after the White House heard of his legal battle with his former high school, Pine Creek High School in Colorado Springs, Colorado.

While a freshman, Chase began a small group for students to pray during a free period in the gym at their school. The prayer group was started after school administrators said there could be no before-school prayer groups on site.

Initially, 10 to 20 students would meet in the group. But by his senior year, the group had grown to 90 students meeting twice a week during their free period to pray and worship in the gym.

When the group reached such a large size, school officials shut down the prayer gathering, telling Chase they could no longer meet because of “Separation of church and state,” (which does not exist in the U.S. Constitution.)

Chase replied by providing copies of some laws protecting their right to religious expression, but ultimately got help from the Alliance for Defending Freedom (ADF), an advocacy organization that focuses on protecting religious freedom.

After ADF filed a federal complaint against Colorado’s Academy District #20, the school reversed its decision and allowed the students to meet and pray during school hours.

In 2020, Chase was contacted by the White House to tell his story nationwide on National Religious Freedom Day.

On January 16, President Donald Trump issued an Executive Order to ensure that religious entities are not excluded from participating in government-funded programs. 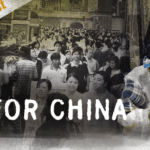 March 4, 2020 Chinese Christian tells of harrowing escape from Communist government
Recent Comments
0 | Leave a Comment
"So disease killed off all his family and friends and he somehow lucky? Then the ..."
David Brevik Squanto: a story of providence enabling ..."
"We definitely need a return to Christian values in our country. The choice is clear. ..."
US_Constitution RIP 1-31-2020 Texas pastors calling on Christians to ..."
"The United States will never be a clerical fascist armpit like Poland."
Statistics Palin Priest denounces Biden and Harris, offers ..."
"The Catholic Church needs de-nazification. We should start by through BXVI and Georg out of ..."
Statistics Palin Priest denounces Biden and Harris, offers ..."
Browse Our Archives
get the latest from
Evangelical
Sign up for our newsletter
POPULAR AT PATHEOS Evangelical
1