“America seems to be in a freefall – morally, politically, culturally – our founding values and the biblical worldview seemingly fading forever,” the Cultural Research Center at Arizona Christian University, argues. But it’s also attempting to do something about it. “Cultural transformation is possible,” it argues.

According to recent survey results, spiritual ineptitude and biblical illiteracy defines the majority of American Christians surveyed. The survey found that while 7 out of 10 Americans consider themselves to be a Christian, only 6 percent actually hold a biblical worldview.

What is a biblical worldview?

A worldview, which everyone has, is a “core belief,” or the German concept of Weltanschauung. No English word can adequately translate the German meaning, but its concept embodies what American-Swiss evangelist, Francis Schaeffer, called, a worldview.

Our worldview is so important that it constitutes a person’s definition of reality, truth, and falsehood. One’s worldview defines a person’s identity, shaping how he or she perceives others and him or herself.

A biblical worldview, PursueGod.org, explains, “is one that is shaped by the Bible and centered on the person and work of Jesus Christ.” This worldview holds three keys points to be true:

“1) Truth: God’s Opinion, Not Mine: A biblical worldview elevates God’s opinion above all others, seeing it as the very definition of truth. The Bible guides us, not our culture.

“2) Submission: God’s Terms: Not Mine Christians with a biblical worldview allow the Bible to be authoritative in their everyday lives. They come to God on his terms, not their own.

“3) Relationship: Love God, Love People: The story of the Bible is about a relationship with God and with people. Christians with a biblical worldview are pursuers of God, not just students of the Bible.”

The American Worldview Inventory 2020 was complied by Dr. George Barna, director of research at the CRC and professor at Arizona Christian University. He founded the Barna Group, a research company, and written more than 50 books.

“Why is it dangerous that so few Americans have a biblical worldview? We see it now with our response to the COVID19 pandemic. Unlike past national crises – including the Great Depression and World Wars – when Americans responded with charity, prayer and hope, today we are seeing widespread hoarding, panic and hopelessness.

“A biblical worldview says ‘love your neighbor’ and brings hope, joy, faith and prayer to any trial or any crisis. When a large percentage of Americans no longer think biblically, the societal response is completely different.”

Because the churches where these survey respondents attend to not appear to be teaching the truths of the Bible, groups like the CRC and PursueGod.org, among others, are.

CRC says, “We have a plan to restore the biblical worldview and God’s truth to all areas of our culture.” It has begun conducting intentional biblical worldview training at Arizona Christian University, arguing, “Nothing is more important than restoring knowledge, acceptance, and application of biblical truth, starting with college students.” 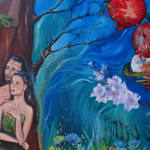 August 1, 2020
New BSF study in Genesis includes artwork from members around the world-- and collection is impressive
Next Post