Two stories about Ebola–one that pissed me off and the other that made me proud to be human December 9, 2014 Kevin Miller 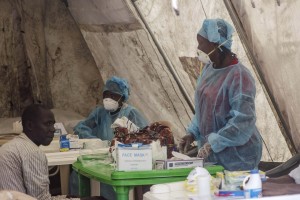 The first story: Doctors in Sierra Leone are going on strike to protest inadequate medical equipment, primarily respiratory machines and vital signs monitors. They’re also alarmed that they have lost 8% of the country’s 120 medical doctors during the crisis (this to service a country of over 6 million people). As a result, one doctor said that she and her colleagues were depressed and “losing courage to turn up for work.” You can read more about it here.

As a citizen of a rich Western country, I’m embarrassed that doctors in Sierra Leone have been put in this position. Why is it that Canada and other Western nations can always find the money to go to war but never the money do deal adequately with humanitarian crises like this?

Case in point: Our CF-18s, which are currently flying missions over Iraq and Syria, cost $16,750 per hour to operate (including fuel and maintenance). That doesn’t count the AIM-7 Sparrow missiles they fire, which go for $125,000 a pop. To put that in perspective in terms of the Ebola crisis, a top of the line medical ventilator will run you about $7,500, and a premium vital signs monitor is just $500. So, one hour of keeping a CF-18 in the air equals two ventilators or 33 vital signs monitors. One AIM-7 Sparrow missile equals 16 medical ventilators or 250 vital signs monitors. Keep your war if you want, but how about grounding one of the CF-18s each day and using the money to support Sierra Leone’s doctors instead?

Another example: It currently costs $802,000 to keep one US soldier in Iraq for one year. The US just committed 1,500 troops to Iraq. If they’re there for even six months, the price tag will be a staggering $600 million, jumping to $1.2 billion if they stay a full year. Trimming that number by even 5% would save over $120 million. Think of what that could do to help provide medical equipment and personnel to Sierra Leone and Liberia. All that, and you can still have your war.

The question is, why aren’t we doing these simple things? I think the answer is pretty simple: There’s no political will. And the political will doesn’t exist, because the people with the power–you and me–aren’t exercising it. That’s why I’m writing this piece. Just this morning, I wrote to my member of parliament voicing my criticisms and ideas. I urge you to do the same if you’re in Canada or the UK. If you’re in the USA, write to your member of congress. Your voice can make a difference, especially if enough people speak up.

And if our governments refuse to step up, we can also put our money where our mouth is, something else I did this morning, by sending some money to Doctors Without Borders or one of the other charities working on the front lines to help combat Ebola.

The second story: British aid worker Will Pooley who became infected with Ebola this past August has recently returned to Sierra Leone to continue his relief efforts. I hope this guy is in line for Britain’s equivalent of the Order of Canada, because he certainly deserves it. And the fact that he also calls BS on Bog Geldof and co. is just icing on the cake. From the article:

“Governments pledged money months ago… I don’t know whether it’s working. I’m sure it’s better to donate than not, but it’s just a shame it gets tied up in lots of bureaucracy,” he said.

He added: “There are still people outside the front of the hospital dying of Ebola because there aren’t enough beds for them. I had hoped that by now that would have been over.”

Pooley, who is currently on a week’s holiday, told the Guardian he had the opportunity to come home for Christmas but was more likely to stay in Sierra Leone where he felt he was needed.

“I’m working with masses of local staff who are risking death,” he said.

He said the local staff, who face stigmatisation from their families and delays in payment of their risk wages, needed more support from the West.

“The big problem at the moment is they haven’t been paid for months – which sounds bad enough to English ears, but in Sierra Leone if you’re not getting paid, then you’re facing starvation. But they’re still coming to work. They are the heroes.”

Like I said, when I read things like his last statement, I’m embarrassed. Will you join me in helping to solve this problem?

December 5, 2014
Why you need to read "Disarming Scripture"--it's a matter of life and death
Next Post

Progressive Christian
When you reduce your position to a hashtag,...
Hellbound

Progressive Christian
Sally Kohn almost gets it right--but gets it...
Hellbound