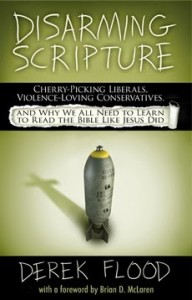 One of my favorite sayings attributed to Jesus comes from Mark 2:27 “The Sabbath was made for man, not man for the Sabbath.” If I can paraphrase this just a little, that pretty much sums up the central argument of Derek Flood’s excellent new book, Disarming Scripture: Cherry-Picking Liberals, Violence-Loving Conservatives, and Why We All Need to Learn to Read the Bible Like Jesus Did

. I would put it this way:  The Bible was written for man, not man for the Bible.

Throughout this book, Derek abides by two central operating principles. The first is that unquestioning obedience of anything, including the Bible, is inherently destructive. It can only lead to an authoritarian, judgmental, self-righteous and ultimately fear-based approach to the gospel. Rather than act out of compassion, when we are in unquestioning obedience mode, we adopt a defensive posture that elevates protection of the book–or a particular interpretation of the book–above all else. Hence the propensity of so many conservative Evangelicals to be

…some of the most outspoken advocates, not only of corporal punishment of children, but equally of gender inequality, discrimination against sexual minorities, torture, capital punishment and of course war–all in a tragically misguided attempt to be ‘faithful’ to the Bible.

As an alternative to this way of thinking, Derek proposes faithful questioning motivated by compassion, a way of interpreting the Bible that, “involves challenging the law in the interest of prioritizing compassion towards others over rigid compliance with the rules.” It is precisely this approach that is modelled not only by the Old Testament prophets but also by Jesus and Paul. As Derek says,

It’s commonly asserted that Jesus affirmed the Old Testament simply by virtue of the fact that he quoted from it. As we’ve seen, however, this claim claim simply does not hold up to scrutiny. The Gospels’ frequent accounts of Jesus’ confrontations with the Pharisees demonstrate that Jesus made a habit of questioning and rejecting how scripture was read and applied whenever he saw that this was hurting people… A faithful reading of scripture is therefore not about defending the bad parts of the Bible (whether by seeking to justify or downplay them). On the contrary, a faithful reading entails wrestling with these troubling texts as the biblical authors did themselves.

Growing out of the notion of faithful questioning comes Derek’s second operating principle: the need to recognize the redemptive trajectory of scripture, which is a move away from divinely sanctioned violence and toward non-violence and love of enemy. It’s not enough to read the Bible where it is; we need to recognize where the biblical authors were headed.

If we read the New Testament as a storehouse of eternal principles, representing a ‘frozen in time’ ethic, where we can simply flip open a page and find what the timeless ‘biblical’ view on any particular issue is–as so many people read the Bible today–then we would need to conclude that the institution of slavery has God’s approval… and that we should therefore support and maintain it today. This is in fact exactly how many American slave-owning Christians did read the Bible in the past. Yet all of us would agree today that slavey is immoral… This is where the importance of a trajectory reading comes in.

As Derek points out, even the most conservative Christians already tend to employ a trajectory reading when it suits them but then revert to a “frozen in time” reading when it doesn’t. He is simply encouraging us to adopt such a view with every topic, particularly those that seem to pose the greatest threat to our pet theologies (because feeling threatened or persecuted is often a symptom of unquestioning obedience rather than faithful questioning). Some people may perceive this as advocating a long, slow slide into liberalism, but this is a difficult argument to maintain when our primary New Testament models for this approach are Jesus and Paul, who applied this same principle to their reading of the Hebrew scriptures.

All of this leads Derek to rethink the notion of biblical authority. If we look at our primary belief-producing mechanisms–scripture, tradition, reason and experience–most conservative Christians would place scripture at the top. Admitting that this is “pretty much the exact opposite of what you learn in seminary, ” Derek suggests that we give experience pride of place instead.

I’ve made a similar argument in the past, noting how the apostles’ experience of Jesus caused them to utterly rethink everything they believed up to that point. Therefore, when it comes to interpreting the Bible, rather than blind faithfulness to a particular interpretation of the text, Derek urges us to take more of a scientific approach to how we read the Bible and how we order our lives as a result.

Science is about observing how life works, and that’s what we need to be doing, too. Science is not about clinging to a theory from the past, but rather is about always moving forward to deeper and better discoveries… The whole spirit of science is to welcome progress, not to restrict it. It does not cling to the past, but moves forward, building on the past.

All of this is to say our reading of scripture cannot be detached from life. Our interpretations cannot callously ignore the hurtful effects they have on people’s lives. On the contrary, they should lead us to life, to abundant life, and more concretely scripture should lead us to the who who is Life.

As I’ve noted above, it is all too easy for conservatives to simply write off Derek’s book as the musings of yet another stark raving liberal. But if they truly engage with his arguments and faithfully question their own traditions, I have hope that not only will they disarm scripture, they will also disarm themselves, because,

in the end, what really matters is how we treat each other. For my part, I am perfectly content to trust God to judge rightly so long as we humans stop hurting each other in God’s name or in the name of justice. The bottom line here is that while we can find disagreement among New Testament authors as to God’s violence, the New Testament is unanimous in its radical rejection of human participation in violence. That is, quite literally, a matter of life and death importance.

Disarming Scripture is available on Amazon.

December 4, 2014
Looking for a Christmas gift for that "special someone"? How about a book on hell?
Next Post

December 9, 2014 Two stories about Ebola--one that pissed me off and the other that made me proud to be human
Recent Comments
0 | Leave a Comment
Browse Our Archives
Related posts from Hellbound

Progressive Christian
When you reduce your position to a hashtag,...
Hellbound