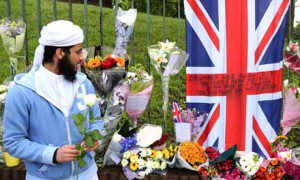 A round-up of news, views, and videos of last week’s brutal, fatal attack on British soldier Lee Rigby in the London neighborhood of Woolwich and the subsequent public conversation on national identity, security and the roles that government and the British Muslim communities should play in preventing violent extremism.