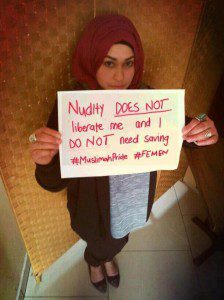 A recent documentary has outed the breast-baring, Ukrainian “sextremist” group Femen as being founded and controlled by a man, Victor  Svyatski, who hand picks “the prettiest girls because they sell more papers.” Femen gained notoriety earlier this year for their Topless Jihad Day, in support of Tunisian feminist Amina Sboui, who had been arrested for posting topless photos of herself, proclaiming that she alone owns her body. In April, Femen’s sextremists took to the streets, demonstrating – typically with crude, anti-Islam messages drawn on their chests – in front of mosques throughout Europe. Interestingly enough, Ms. Sboui, a self-described anarchist, disconnected herself from Femen in August, saying the group is Islamophobic.

Femen’s antics angered and frustrated Muslim feminists the world over. Many saw Femen’s crude antics as typifying the white savior complex. I had the opportunity to air my views on Al Jazeera’s The Stream, along with several other amazing Muslim women (US users may not be able to view this link). Some took to social media, taking and sharing pictures of themselves carrying signs proclaiming that Femen does not have the right to speak on behalf of Muslim women. Femen’s Svyatski-picked thin and blonde spokeswoman Inna Shevchenko’s response to this action, “They write on their posters that they do not need liberation, but in their eyes it’s written, ‘Help me,’” seemed disconnected from reality. 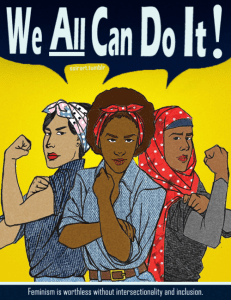 Shevchenko wrote an open letter to Muslim women, referring to us as “modern slaves” and justifying her group’s antics on the basis of feminism. Ah, yes. Feminism. I am a feminist, and my feminism doesn’t demand all women take off their clothes – whether they want to or not. My feminism doesn’t demand all women to conform to Western beauty ideals before they can be heard. My feminism is intersectional in nature, amplifying the voices of all women and our male supporters, who work toward building just societies where the lives of women and girls are protected equally under the law; where women and girls have equal access to health care, education and the work force; where women and girls have the choice to live the lives they want to live – without interference from their family, society or government. My feminism does not require me to turn my back on my Creator. My feminism is for everybody.

Which brings us back to Femen’s origins. Based on the quote from Svyatski, the whole Femen enterprise seems to be a way to gain notoriety and sell some newspapers. I’m not necessarily against someone making a buck while raising awareness for a cause. And women the world over have long used or taken off articles of clothing to make a feminist statement. But stripping beautiful, thin women of their clothes and putting them in front of cameras to make a buck is not feminism. It is exploitation, unveiled.

September 17, 2013 Immigration, Interfaith and the Autobahn
Recent Comments
0 | Leave a Comment
""
Szecho Boxes – A Spoken Word
"Greetings, Mr Hind Makkithis is Ahmed sobhi from turkey store thanks for refereeing to us ..."
AHMED SOBHI Ertugrul – Your Muslim friend’s new ..."
"If you have been kidnapped and forced to join the Sultan's harem wouldn't that make ..."
P. McCoy Ertugrul – Your Muslim friend’s new ..."
"May I ask, which Muslim denomination did you join, Sunni, Shi'a, Sufi, Ahmadiyya.I hope it ..."
Tom Borromeo Trying on Muslim
Browse Our Archives
Related posts from Hindtrospectives