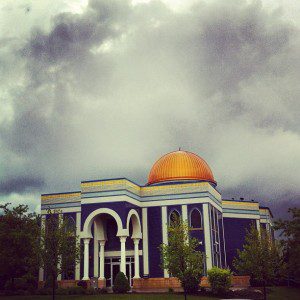 Orland Park is a well-to-do suburb of Chicago that is coming to terms with its diversity. The local library boasts manicured lawns, high-tech facilities and a robust community engagement credo. There have books and resources in Spanish, Polish and Arabic and capitalize on  “history” months as teaching moment for their diverse patrons. Diversity was not always embraced; in 2004 there was an effort to block the building of a mosque by outraged citizens, scared that the it would become a breeding ground for terrorists.

Today, you can’t miss the mosque – the gold dome twinkles a few streets past CostCo – or it’s members, who are locally active in interfaith efforts. They plan volunteer events to benefit Habitat for Humanity, the Red Cross, and the Chicago Food Depository. They host free tours of the mosque for local churches, schools and interested visitors. Golf outings double as mosque fundraisers, and youth activities often take place in the local bowling club. Years after the brouhaha over their building permits, Orland Park’s Muslim community is quietly weaving themselves into the tapestry of their corner of Suburbia, USA.

The folks at the National Endowment for the Humanities likely did not anticipate that their program, the Bridging Cultures Bookshelf, would lead to hateful screaming matches in Suburbia, USA when they started their Muslim Journeys initiative. Last Thursday, the Orland Park Public Library, which is a recipient of the grant that distributed books and other resources on Islam and Muslims to public libraries across the country, hosted a panel discussion by Muslim academics about Islam, as part of their month-long Muslim Journeys series. To say the panel got heated is an understatement. 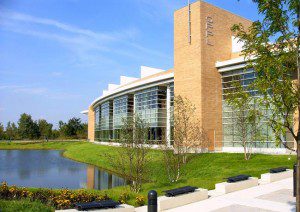 As a Chicago Tribune article reports, the contentious tone for the evening was set while the three panelists were still being introduced. Members of the Islamophobic group Act! For America interrupted the panelists to demand that the event begin with a public recitation of the Pledge of Allegiance. They continued to disrupt the discussion throughout the evening, yelling about Sharia law and jihad, clapping and cheering for one another as they took turns to insult the panelists, repeating their claims that Islam is diametrically opposed to everything America stands for. In the face of these disruptions, led by a dozen audience members, the panelists repeatedly asked the audience to keep an open mind about Islam. The members of this group became so rowdy, that library officials called the police to maintain calm.

Of the event, panelist Iman Sediqe, a PhD candidate at Northwestern University, said, “It was startling at how open some were in their hateful regard for us, though unfortunately it wasn’t very surprising. [The library] had the police escort myself and the other panelists to our cars after the event for our safety because of how vehemently angered some of the audience were. It definitely did not make me feel very safe, but I appreciated the discussion that did occur.”

Essentially, a library event – whose goal was to address people’s fears of Islam – was hijacked by organized right-wing extremists whose behavior merited police intervention to keep the calm and police protection for the three Muslim panelists. Act! For America shouts their grotesque narrative about American Muslims at anyone who lends an ear (and at those of us who don’t). I’m not sure if Orland Park’s library or mosque will hold any follow-up events to last Thursday’s anger-filled evening. What I am certain of, is that in the face of organized Islamophobic campaigns, American Muslims must be the ones to tell our own stories.

Volunteering at the local food bank, organizing blood drives, raising money for those displaced by natural disasters are all part of the American Muslim narrative. My Muslim community quietly works with interfaith partners to make our town a better place to live. Our actions might speak louder than words in a world neutral to Islam, but in a world hostile to our faith, we must shape and tell our own narrative. As the American author Peter Orner once said, “We define ourselves by the stories we tell.” So, what is the story American Muslims want to tell?

August 19, 2013
Glamjabis in Paris - religion and haute couture in hypersecular France
Next Post