Glamjabis in Paris – religion and haute couture in hypersecular France 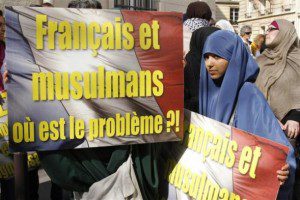 Earlier this summer, riots broke out in suburban Paris, sparked by a police check on a Muslim couple. The woman was wearing niqab, which is illegal in France, and the confrontation between the police officers and the couple escalated violently. Unsurprisingly, the government supported the police officers; Interior Minister Manuel Valls said,”Police did their job perfectly. The law banning full-face veils is a law in the interests of women and against those values having nothing to do with our traditions and values. It must be enforced everywhere.” France’s Socialist government is contributing to the marginalization of it’s own Muslim citizens.

In recent years, hypersecular France – which has the largest number of Muslim citizens in Europe – has developed and implemented counter-terrorism laws that seem to be designed to curtail the religious expressions of French Muslims. Girls are still banned from wearing hijab in schools, face veils are completely banned in public, communities wishing to build or expand mosques run into bureaucratic red tape from local government, police surveillance of immigrant neighborhoods is a matter of course, and even the availability of halal meat became a political lightening rod during last year’s national elections.

The Socialist government’s counter-terrorism tactics, the never-ending identity and integration debate, and the constant presence of the far right in electoral politics, in the form of the National Front and it’s charismatic leader Marine Le Pen, are happening during a time when France is experiencing a worrying trend: physical attacks against Muslims, their mosques and institutions have risen between 35%-50% so far in 2013. Earlier this month, an air force sergeant, with alleged ties to the far right, was arrested on his military base and placed under investigation for allegedly attempting to commit a terrorist attack against a mosque in Lyon. Islamophobia undoubtedly is on the rise France. 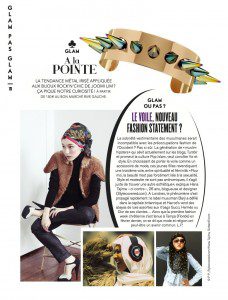 So imagine my surprise last week when I saw a post on Facebook by the couture hijab site, SixteenR, sharing a picture of their ad in the French fashion magazine Glamour. The accompanying text asks if hijab is “glam or not.” It continues on, mentioning that young, social media-savvy Muslim hipsters do not think that being hijabis is counter to being fashionable. Indeed, the rise of “glamjabis” and their popular social media sites, shows that – at least for tens of thousands of young Muslim women –  hijab couture is a way of life. Bright colors and patterns and innovative wrap styles complete the look for fashion-forward glamjabis.

And France, of course, is the land of high fashion. Civil rights activists will take on the legality of the French government’s anti-hijab and counter-terrorism measures in the courtroom, anti-racism activists will take on the National Front through grassroots electoral campaigns, and endless media debates about integration will loop on television. While fashion-forward Muslim women will continue to sell and buy stunning new designs, smashing stereotypes of the drab, oppressed Muslim woman who needs the armed forces of the state to protect her from her own identity. 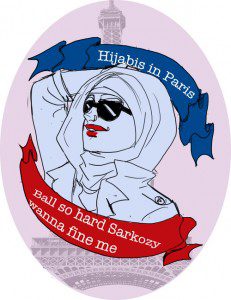 August 4, 2013
On Side Entrances and the Adab of Clicktivism
Next Post