On Side Entrances and the Adab of Clicktivism 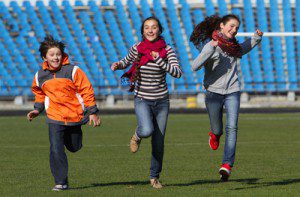 We slip the note in under the imam’s closed door and run away from his office like our lives depend on it. Our hearts thunder in our ears and we gasp for breath, silently sprinting through the lobby, down the stairs and out the doors into the now-gone playground adjacent to the mosque. A few minutes pass. We straighten our ankle-length, pleated, navy blue and forest green plaid school uniforms and finally, my friend and I are able to speak.

“I hope so! Do you think anything will change?”

“Do you think we’ll get into trouble?”

“Well, we signed it as Anonymous.”

My friend Jihan and I both squealed at the thought of the muezzin seeing us slip a hand-written note under the imam’s door.  I was in 8th grade and she in 9th at the all-girls Islamic school we attended, which was housed in the mosque. It was a warm September Monday and we told ourselves we wouldn’t talk about the note until the end of the week. Otherwise, we’d drive ourselves crazy thinking about whether the imam would read it, what he would do, whether Tarek saw us, etc. No, it was saner to focus on school and yearbook club and wait until the end of the week to see whether our discreet action would bear fruit.

Fridays were a favorite for the girls, since we had shortened classes to end before the Friday prayers started.  Some students would leave the last period early and help the Mother’s Club make delicious falafel sandwiches to sell to the congregation after the prayer. Our mosque served a dynamic, immigrant Middle Eastern community. In those days, before anyone had heard of Al-Qaeda, before “interfaith outreach” became a staple mosque committee,  before the 9/11 attacks devastated the country and catalyzed millions of Americans to want to know who the Muslims are in their midst and what we believe in – years before any of that, my mosque, like many across the country, was concerned about connecting a diasporic community together and providing sincere religious education to the congregants.

Unlike most of the aunties and uncles in our community, Jihan’s parents were not immigrants. They were two of the handful of people who were born and raised in the US; their own families fled Palestine not too long after the creation of Israel resulted in the first wave of Palestinian refugees. Jihan’s parents sent her to the Islamic school so she could learn about her faith and language. She admirably began learning Arabic as a teenager, yet struggled with the classical Arabic used in the weekly sermons. And she was not alone; most of the girls in our school – who studied Arabic daily and were children of Arabic-speaking immigrants – also struggled with the sophisticated grammar and sometimes esoteric subjects of the imam’s sermons.

So we wrote a note to the imam. In my very best cursive writing, we thanked him for being educational in his sermons, but  that many youth don’t benefit from them because they don’t understand classical Arabic. And the ladies who are married to Arab men often don’t understand Arabic at all. Since ladies and youth are important members of the community, would he consider translating his sermons into English? Jazak Allahu khairan. Anonymous.

By the time Friday rolled around, Jihan and I had practically forgotten about our note. We sat quietly in the basement of the mosque, where women pray. The Imam began his sermons with the usual prayers in Arabic, but after couple of minutes pass,  I realized what the subject is. I poked Jihan and whisper, “he’s talking about youth!” She straightened up and perked her ears in time to listen to the imam read our letter to the congregation out loud. He thanked “Anonymous” and said that he will now offer an English translation of the sermon, in addition to the Arabic. And that the mosque will work to develop English-language educational programs and encouraged all the youth to participate in those.

Score! And what a relief that Tarek didn’t see us!

In the last few weeks I’ve been thinking deeply about a Prophetic saying that I first memorized and studied in those days at that Islamic high school, “If one of you sees something wrong, let him change it with his hand; if he cannot, then with his tongue; if he cannot then with his heart and this is the weakest of faith.”

With the advent of the internet, social media and “clicktivism,” it is now easier than ever to implement this teaching. You can add your name to a petition, retweet a link, or hit the share button to spread a news item to your online network within seconds. You can join a dialogue group that connects online to discuss and brainstorm long-term solutions to a particular challenge. You can raise awareness about a social justice issue with a few clicks of your keyboard. And you can effect real change if you find like-minded people who also amplify the same issues you care about.

One year ago, I started my blog Side Entrance with this hope. It’s a photo gallery that showcases women’s prayer spaces in mosques around the world – the beautiful, the adequate, and the pathetic. This Ramadan, I started a complementary Facebook page for Side Entrance, where people can share their stories and photos, and discuss their ideas for positive change. To help catalyze that conversation, I share a daily Photo of the Day. One of these photos was of a hazardous women’s area which was unkempt, cluttered with supplies and – most damaging – had mold growing on the walls. 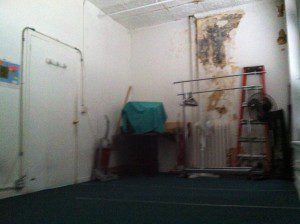 This photo quickly went viral and the backlash was almost immediate. I was asked to remove the photo and contact the mosque privately. I was told that sharing such a photo publicly caused online fitna (chaos and discord). I was admonished to think of how Fox News and other Islamophobes would react if they saw such a photo.

I began to wonder: is it really fitna to highlight such egregious and hazardous spaces with the intention of getting a conversation started and finding local solutions very real problems? I’m trying to follow the teaching of the Prophet PBUH; that faith requires us to change what is wrong – an injunction that is echoed in the Holy Quran repeatedly. And social media offers me access to a wide array of activists: people who want to collaborate on a fund for mosques that cannot afford to maintain women’s spaces; others who want to develop and share a study on the ideological reasons why some mosques have separate and unequal spaces for women; men who had previously not realized that the situation for some of their sisters in faith is so dire and are now empowered to become allies who  speak up for women’s rights; experts who share their knowledge of the historical inclusion of women in mosques; architects who offer their services to help mosques design intentionally women-friendly spaces from the outset, etc.

There is a Divine Command to enjoin good and forbid evil, a Prophetic injunction to change wrong situations to the best of my capacity, and a high-tech method to disseminate information globally within a matter of seconds. I don’t always have personal access to Muslim leaders, but I can reach them easily via social media. Traditionally, Muslims prefer to receive advice in private; indeed, that may be the reason why the imam was moved to re-examine whether his sermons were benefiting everyone in his congregation.

Sometimes, however, it is beneficial to publicize a request for change. Earlier this week, some of my friends tweeted that there was to be a panel discussion on re-thinking mosques with an eye to inclusion at an upcoming major Islamic conference. All the panelists are prominent, nationally-known American leaders. There were no women on the panel. I used the same medium, and tweeted at the male speakers and the conference, highlighting the lack of female representation on the panel. For their part, and to their immense credit, the male speakers immediately responded positively to my tweet. Boston’s Imam Suhaib Webb, the director of one the most dynamic mosque communities in the country, even publicly tweeted that he would not speak if a woman was not added to the panel.

The conference planners fairly quickly rectified the situation, asking a prominent Muslim woman, Chaplain Marwa Aly of the film Unmosqued, to join the panel. I was so excited that Imam Webb responded so positively and again I used Facebook as a medium to start a discussion around the importance of Muslim male allies. A robust discussion, which included members of that conference’s planning committee, emerged. Again, the point was brought up that we could have contacted the organizers privately. Again, I wondered if I had acted improperly or rudely in this holiest of months. 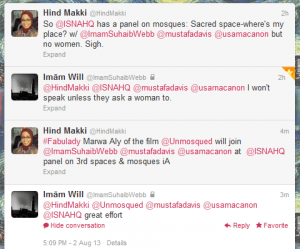 In Muslim tradition, advice is meant to be given privately and evil should not be publicized unless someone is wronged. Had I known who the specific people were, I would have contacted them privately about the panel. But here’s the thing: They are not evil. They simply neglected to remember that a woman might have something new and interesting to say on the panel. The people who run that mosque with the moldy prayer space are not ill-intentioned. They likely do not have many women worshipers and might be strapped for cash. Raising these issues publicly on social media, in a respectful manner, and with the intention to collaborate with others in the community in the way of the Prophet PBUH is a practical first step to effect positive change and not a fitna.

When I was 13, my friend and I privately and anonymously sent a letter to the imam of my mosque, frightened that we would get in trouble somehow and worried that he would ignore us. He not only took our concerns seriously – he read the letter out loud, in full, to the entire congregation during Friday prayer. This week, a few women and I publicly tweeted at Imam Webb, confidently using our names, with the hopes that he that he would engage us positively. He responded publicly with a message of support for women, that all his followers, supporters and conference organizers could see. There are lessons to be learned here, but also, work to be done. Let’s purify our intentions and work together to implement the Divine Decree:

“The believing men and women, are protectors and helpers of each other. They (collaborate) to promote all that is good and oppose all that is evil; establish prayers and give charity, and obey Allah and his Messenger. Those are the people whom Allah would grant mercy. Indeed Allah is Exalted and Wise.” (Al-Tawbah 9:71)