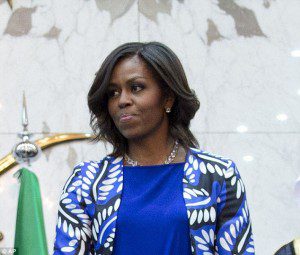 A quick look at social and traditional media over the last 24 hours and you wouldn’t be faulted for thinking that one of the most important events that occurred this week wasn’t the Ukrainian war intensifying with a deadly attack on civilians in a government-held city, but that Michelle Obama, the First Lady of the United States, visited Saudi Arabia with her husband. And while she was there, FLOTUS did not cover her head. The First Couple cut their trip to India (which focused on nuclear talks, military deals, and strengthening bilateral relations) short in order to pay their respects to the House of Saud for the passing of King Abdullah and to meet the new King Salman.

Apparently, this is big news.

To be fair, FLOTUS’s sartorial choices became big news only after some Saudis on social media commented about her lack of a headscarf. Many of those commentators thought she should have covered her head during her hours-long stopover in the kingdom. There were (debunked) rumors of Saudi state TV blurring out images of our FLOTUS who dared to be seen in public without a veil. Twitter exploded, as is its wont during these sorts of events, with hashtags like #MichelleObamaUnveiled #MichelleObama #MichelleObamaImmodest. It’s almost as if the social media world doesn’t even care that Yemen is on the brink of collapse.

In our part of the world FLOTUS, whose signature public initiative is the healthy living Let’s Move! campaign, often makes the news for her fashion sense. But with her latest garb in Saudi Arabia, some US media took the opportunity to play the woefully underutilized “Western savior of the Muslim world” card. We were told that FLOTUS was making a bold political statement on behalf of feminism. We were told that simply by standing “dutifully” beside her husband, when it comes to gender rights reforms in Saudi Arabia, FLOTUS is “leading by example.”

Totally. And I wouldn’t be surprised if some of the equally highly educated Saudi women (some of whom might also be trained lawyers currently not working in their field, married to wealthy men, and mothers to teenagers) actually do find FLOTUS inspiring. She is just that fabulous! But it’s Saudi women and their male allies who will lead the way for gender reforms in their country. Not the wife of a foreign politician who will be leaving office in 2 years. Internal change takes a long time though, and in the meantime, many Saudi women and their families have adopted hundreds of Syrian orphans to try to alleviate their suffering in the midst of a brutal war.

Hijab is one of those topics that seems to always generate a ton of controversy and discussion, especially among people who don’t wear it. Normally, I try to stay out of that conversation, mainly because my mind is often occupied with other things, like the international response to the Ebola outbreak, but there are times when I’ll throw my veil in the ring with an opinion or two. One of those times is when I’m in an interfaith setting.

I’m often asked whether women who are not Muslim should cover their heads when they visit a mosque. I always answer, “You don’t have to cover your head, but you may if you wish to do so.” What’s usually more important than a covered head is that all visitors – of all genders – dress respectfully. If a person knows she or he is visiting a place of worship, I’d stay away from shorts, mini-skirts/dresses, and sleeveless tops. I don’t think it should be considered a case of SHARIA INVASION vs. LETS LIBERATE BROWN WOMEN to dress modestly when visiting any house of worship or attending a religious ceremony.

Of course, FLOTUS didn’t attend the funeral of King Abdullah nor did she visit a mosque during her trip. But Saudi Arabia is a country with a strict public dress code, so let’s check out what FLOTUS actually wore. Long, loose black pants, long loose blue shirt, and even longer and looser jacket with long sleeves. No cleavage, no legs, no bright makeup, no problems. This is a completely appropriate sartorial choice for an unexpected visit to a conservative kingdom that recently lost a monarch. The whole hysteria over what FLOTUS wore should actually be a non-event, because no US female politician has ever covered her hair during an official visit to the Kingdom, as the Dutch journalist Harald Doornbos succinctly posted on Twitter. 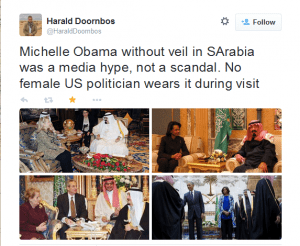 What FLOTUS wore in Saudi Arabia is just not a big deal. I’m glad she didn’t cover her head during the trip. For one, she’s not Muslim, so why should she observe hijab, which is a religious ritual for Muslim women. Secondly, she wasn’t visiting any religious sites while she was in Saudi Arabia. Thirdly, can you imagine the brouhaha in the US if she did cover her head? There would be more outrage over her sartorial choices than there has been about the shady official story behind the 43 missing Mexican students just across the border.