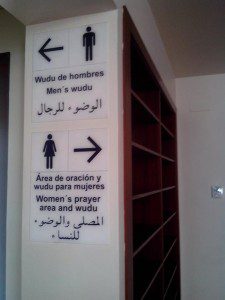 For about two years now, I have been negotiating the fact that I am a convert to Islam born and raised in Mexico and with an Indigenous background. To add to that, I am an immigrant to Turtle Island (better known as Canada), and I feel eternally ashamed of having sworn loyalty to the Queen of England during my citizenship ceremony. For me, this action was a legitimization of colonial practices and an erasure of the suffering of Indigenous peoples in this land.

But what can I tell you? That’s where I have been placed: at the intersection of multiple of identities and as an accomplice in the oppressions of others, a privilege I am still working through.

I did not always feel intersectional, Indigenous or Muslim. In fact, I was actually quite mainstream. I grew up as “white” in a society that believes that white equals better. I was also raised in the tradition of “secular liberalism” because, you know, religion is the “opium” of the people. However, despite my non-Catholic upbringing, the reality of things is that Catholicism is still embedded in my genes… how do I know? Because I still have what I call the “Catholic guilt.” That includes an “automatic programing” to imagine Jesus as white and to be very used to not seeing many women in positions of power, leadership or liturgy.

By the time I decided to convert to Islam, my life had changed drastically. I had moved to Canada, I had become a “Latina” (as they call us over here) and I had been forced to confront my Indigenous identity, one that I had always pushed to the side. Despite the fact that my “Catholic guilt” would make me hesitate about endeavoring into an identity search that questioned race, heteronormativity, nationalism and gendered power relations simultaneously, Islam became a way of making sense of all the things I was feeling, thinking and experiencing.

The problem was that the community where I worshiped was indeed as colonized as I had once being.

I converted at my local mosque surrounded by strangers. I pronounced my shahadah to an awaiting public that was just thrilled to presence the “validation” of their beliefs; as if I, the most recent female convert, embodied the proof that Islam was the Absolute Truth, rather than acknowledging my own soul-searching process. 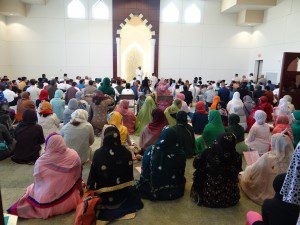 After saying those sacred words of “La illaha ila Allah,” I was approached by a group of women who handed me a “convert’s starter kit” with a hijab and pretty crappy books like You Can be the Happiest Woman in the World. I went back home feeling pretty unspiritual. But hey! I was a REAL Muslim.

Never mind that I prayed in a tiny room with a one way mirror at 40 degrees Celsius during summer because Allah forbid I “tempted” one of the “brothers.” Or that I was considered to be the third best thing after Arab women and white converts because I was still “acceptable” within the racial spectrum. Or that I was taught that Allah hates sinners, primarily those in non-cissexual and non-heteronormative relationships. Or that my congregation denied my identity as an Indigenous person by virtue of labeling me “Latina” and being complicit in the oppression of Indigenous peoples in this country by labeling them “drunks” and “lazy.”

A few months ago an Indigenous woman told me that being Indigenous and being Muslim are mutually exclusive because Islam is “a colonizing religion.” At the time I was not entirely sure what she meant, but something I can for sure say is that many Muslim communities in Canada are “colonized.” What does that mean? It means to be blindsided to the ways in which colonial relationships remain central to our lives both as immigrants of former colonies and as residents or a settler colonial state. It also means that we fail to see how whiteness, heteronormativity and gendered power relationships have been imposed on us. But what is more… we understand ourselves through the terms that others, often white-heterosexual-privileged males, have created for us…

That’s why whiteness in North American mosques has become so important at the expense of black Muslims, particularly black women. Are you looking to get married? You better pull out the colour palette and show us where you fit in the racial spectrum. Are you Indigenous? What does that even mean!

That’s also why some recent Islamic scholarship seems to be particularly concerned with the policing of gender and sexuality. Are you queer, lesbian, gay, trans? There is no room for you because we can’t even conceive gender as non-binary. What more proof that our way of imagining Allah as either male or female but never anything different?

Similarly, that’s why mosques, often times, uphold hierarchies and privileges. In my mosque the converts used to joke about how we had a “pyramid of hierarchies.” If you were from a “good” and wealthy family, you were up there at the top. If you were black, a convert and had been married before, God help you!

We can’t blame all of our problems on the colonial experience, true. But the colonial experience has had a hell of a lot to do with how patriarchies, hierarchies and power relations have developed in the mosque environment. What is more, we always talk about the golden past… women used to do this and that… the wives of the prophet were allowed to… there is a hadith that says… but we haven’t engaged in a systematic project to identify the origin of mosque oppressions in light of how colonial power relations have marked our histories, and unless that changes in the next decade, mosques in North America will continue to reproduce harmful colonial relations that have coopted the principles of equality, love and justice that many of us see in Islam.

But once more, I am a convert and a woman of colour… one of those people who are rarely listened to in the mosque environment, so I am skeptical of change… are most Muslims up to the challenge?

Eren Cervantes-Altamirano is an MA candidate at Carleton university. She is an Indigenous woman from Mexico and has been exploring intersectionality, decoloniality and resistance for a few years now. She currently blogs at Identity Crisis, Muslimah Media Watch and Love Inshaallah. You can follow her at @erenarruna.

This article is part of the #MyMosqueMyStory series that will be featured on Hindtrospectives throughout the month of Ramadan.

June 19, 2015 The Impossibility of Tarawih
Recent Comments
0 | Leave a Comment
Browse Our Archives
get the latest from
Muslim
Sign up for our newsletter
POPULAR AT PATHEOS Muslim
1