American Muslims Are Not Your Soundbite in the War On Terror

For a foreign policy wonk like me, last night’s Democratic debate was particularly interesting to follow. Clinton and Sanders engaged in rigorous debate over Henry Kissinger, the Domino Theory, Nixon opening China, Iran’s first democratically elected Prime Minister Mohammad Mossadegh, and many more subjects that I studied in college as an International Relations major. When Bernie yelled that Kissinger is not his friend, I felt the urge to throw donuts at students at the library in celebration of the awesome one-liner. All they had to do was debate Samuel Huntington’s Clash of Civilizations and my second semester sophomore year would have been complete.

In a way, though, the candidates danced around Huntington’s theory when the topic of ISIS and national security came up. Bizarrely, Clinton commented that “American Muslims are on the front lines of our defense. They know what’s happening in their families and communities.”

Listen, this is a PSA to our Democratic candidates: First of all, I acknowledge that you refuse to be baited by Islamophobic rhetoric on the GOP side. Thank you. Really, it means a lot to see older, White legislators publicly grapple with the concept of White Privilege, and to reiterate that America must not be held hostage by a racist and xenophobic hysteria. The GOP candidates’ puerile discourse on Islam and American Muslims is engineered to appeal to the lowest common denominator of fear, insecurity, and hate. The Democrats, on the other hand, embrace America’s changing demographics and continue to highlight their philosophical differences with the Republicans on America’s diverse identities. 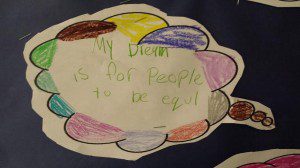 But let’s get back to that national security answer. To be fair to Clinton, she’s not the only politician to say that American Muslims’ value is as tools in the War on Terror. Marco Rubio has said it in a previous GOP Debate and President Obama reiterated this concept during his visit to a Baltimore mosque last week. Vox editor Jennifer Williams recently wrote about why linking American Muslims to national security might be a great soundbite to a certain demographic, but is counterproductive to the country as a whole:

American Muslims have every reason to report suspected terrorism activity, and we’re not going to stop doing it just because a few politicians say ugly things about us to win votes. To suggest that Muslim American opposition to terrorism and support for law enforcement is somehow conditional, as the quotes from Rubio and Clinton and too many others imply, is both wrong and deeply insulting.

I agree with Williams’ analysis and want to underscore what she wrote. As a community, American Muslims have consistently reported cases of suspected terrorism to the authorities, even as we have been wholesale surveilled, policed, and targeted by national security agencies. We want to live in a safe society and we do not want members of our own community to attack our country, so we will continue to report suspected terrorist activity regardless of what any politician says.

But to tie American Muslims to national security is to put conditions on our rights as citizens. And it’s telling that the candidates discussed American citizens in the foreign policy segment of the debate. American Muslims are citizens like everyone else, but are the only group expected to police it’s own criminals. Clinton said that American Muslims are on the front lines of national defense because we know what is going on in our families and communities. That’s true; we do know what’s going on in our families and communities. I’ll let you in on some big secrets: 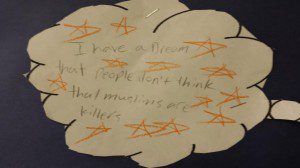 My mom has been a teacher for 30 years; she loves her students fiercely and is a strong supporter of girls’ education. Although she teaches at a private, suburban school, she closely follows the rancorous stalemate among Illinois Governor Rauner, Chicago Mayor Emanuel (an old Clinton ally), and the Chicago Teachers Union. My cousin recently immigrated to the United States with a medical degree from Sudan. He’s spent the last year studying for his boards, improving his English language skills, and raising funds for the family of a murdered Sudanese immigrant in his area. Living near Philadelphia, he’s also been getting a free crash course in the #BlackLivesMatter movement.

The mosque down the street hosts a “Friday Night Live” event every weekend. Teenagers hang out, watch movies, talk about their lives; share their dreams, their fears. The mosque regularly holds interfaith service events and was recently featured on The Steve Harvey Show for an episode on religious diversity in America. My friends in the city are hosting an event this weekend at a south side church. We will gather to offer the Muslim Prayer of the Oppressed, holding the victims and survivors of police violence against Black bodies in our hearts. 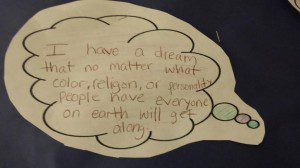 of any terrorist plots happening in my community, but I do know that Muslim leaders in Chicago and across the country work closely with law enforcement to stop terrorist recruitment of young people and report suspicious activity. I do know that my cousin wants to join the ranks of the hundreds of thousands of Muslim health professionals who save lives and keep America healthy. I know that American Muslims are teachers and activists, engineers and innovators. I know that American Muslims share the same concerns that fellow citizens have.

I know that when Farheen Hakeem, a Milwaukee woman participating via Facebook asked a question during the Democratic Debate last night, it was about how her elderly father will pay for his medical bills under a Clinton or Sanders administration. Ageing Babyboomers, poverty, and Medicare: these are some of the issues Muslim voters care about. No one said one word about how if she helps with national security concerns, then she is welcome in America in her headscarf. Instead, both candidates answered her question thoroughly and calmly discussed the substantive differences in their health care policies.

As it should be.