What Are Polyamorous Christians to Make of Karl Barth? (Guest Post)

As part of the conversation on polyamory and the church, I want to bring some voices other than my own onto this blog. So you’ll be seeing a few guest posts and interviews from other poly folks and poly-affirming Christian leaders. If you have something you’d like to contribute, let me know.

Today, a friend (who wishes to post anonymously) is weighing in on the discussion surrounding Karl Barth’s controversial relationship with Charlotte von Kirschbaum. What might polyamory add to our understanding of this matter?

There has been a recent stir in the theological academy since the publication of “Karl Barth and Charlotte von Kirschbaum,” an essay by Christiane Tietz on Karl Barth’s life-long relationship with his live-in assistant. Even the Evangelical flagship magazine, Christianity Today—which has never been a devout fan of Barth’s neo-orthodox and borderline-universalist theology—has picked up the story. Tietz’s essay is based on the new release by Barth’s children of letters between Karl and Charlotte that provide more details about the nature of their relationship. One has to pay to access Tietz’s essay online, but the PostBarthinian blog provides an excellent summary of her findings.

Essentially, for four decades, Barth lived in what we might today call a polyamorous “V”-style triad with Charlotte and with his wife Nelly. They of course did not have this terminology, and they had no social context in which such an arrangement could be considered acceptable. They were simply trying their best to accommodate the inconvenient reality that Karl loved both his wife and Charlotte very deeply.

It seems from these letters that Karl, as well as the two women, were conflicted about the arrangement their entire lives, and that it brought all parties both pain and joy (or in the terms of the essay, “bleakness and brightness.”) It seems to have been especially difficult for Nelly, however, who only reluctantly agreed to the arrangement and did—at least at times—feel betrayed by Karl.

These revelations are interesting from the standpoint of contemporary Christian polyamorists like myself, who believe that monogamy is but one way to structure human relationships, and that—since love in the kingdom of God is neither limited nor possessive—various forms of ethical non-monogamy are acceptable as well.

On the one hand, I’m inclined to say that there was nothing inherently wrong with Barth’s arrangement. If he and Charlotte and Nelly had only known that polyamory was a legitimate moral option, they might have found a healthier route into it and saved themselves a great deal of shame and angst.

On the other hand, as others have pointed out, whatever we ourselves believe about the morality of polyamorous arrangements, Karl himself believed that what he was doing was wrong, and nevertheless, he did it anyway. One is reminded of Paul’s counsel in Romans 14 regarding eating meat offered to idols, that “if anyone regards something as unclean, then for that person it is unclean.”

More than this, Karl also knowingly did things that were hurtful to Nelly, manipulating her into accepting a situation that she was not fully on board with. Thus we cannot say that their polyamorous relationship was fully consensual by all parties. We who approve of polyamory do not approve of manipulation. A reluctant partner should never be coerced into a polyamorous arrangement, leaving them feeling betrayed and trapped in a relational structure they do not desire.

Of course, four decades is a long time to live together as a triad. And as Barth’s letters relate, there were long periods in which Nelly was more-or-less reconciled to the situation. Nelly even visited Charlotte regularly on her sickbed for seven years after Karl’s death, and she had Charlotte buried along with Karl in the family tomb, where she herself would be buried a year later.

Again, their relationship had both its bleakness but also its brightness. Maybe if polyamory had been a more socially (and theologically) acceptable option in the mid-twentieth century, they might have been able to work out an arrangement that was more palatable to Nelly from the get go. Or maybe not.

Either way, what strikes me most about this situation is Barth’s deep love for both of these women. He was committed to maintaining relationships with both at the same time, without having to choose one and reject the other. These are the authentic human realities that many of us have experienced—that most humans in general (I would argue) also experience—but which our society, whether in Barth’s day or our own, typically has few options for navigating.

I believe that polyamory has many gifts it can offer to the world, and one of these gifts is greater flexibility in figuring out what to do when we do in fact find ourselves in love with more than one person at a time. Polyamory allows for more options than either rejecting one love in order to keep the other or trying to keep both but feeling guilty or betrayed your whole life. And anything that enhances the sum total of love in the world, I think, is a very good thing. 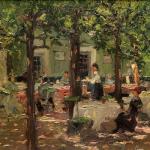 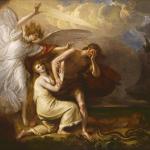 November 7, 2017 Polygamy and the Problem of Patriarchy
Recent Comments
0 | Leave a Comment
Browse Our Archives
Related posts from Hippie Heretic