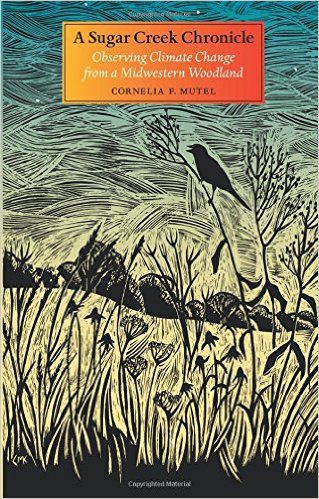 Over the past few years I’ve forged a friendship with author and ecologist Connie Mutel, a bond that has come with an added bonus: the occasional use of her home in the middle of the woods as a retreat. As I’ve grown to love Connie, I’ve also grown to love her home, which has been a place of renewal and inspiration to me at significant times in my life.

Because of my personal connection to that patch of land, I am especially pleased to recommend Connie Mutel’s new book A Sugar Creek Chronicle: Observing Climate Change from a Midwestern Woodland. It’s a powerful meditation on the implications of climate change as viewed through the lens of Connie’s life and home.

In the book she describes a single year in the life of her Iowa woods, writing about its bur oaks and shagbark hickories, its wildflowers, birds, insects, and the periodic burns that renew its plant life. She writes eloquently of her attachment to this land and how it’s nurtured her and her family through the decades.

Connie traces the twists and turns of her own life as well, describing her youth in Madison, Wisconsin, the tragic early death of her mother from cancer, her marriage, and the mothering of her three sons. Connie’s own cancer diagnosis at the age of 38 triggered dread that her illness would follow the same course as her mother’s. It also becomes a metaphor for facing the challenges of environmental harm.

“Because [my] cancer was caught early and treated aggressively, I had choices my mother never had,” she writes. “And this has made all the difference. I determined to remain vigilant in order to stay alive and continue providing support for my children. I had learned that recognizing problems early and immediately doing whatever I could to solve them gave me a chance at a full life—a lesson I have since applied to many other aspects of life, including most recently my consideration of climate change.”

The impetus for Connie’s book came in part from the approaching birth of her granddaughter Ellie. She wondered what sort of world her generation was leaving to this new generation. For this reason she blends scientific facts about climate change with her own personal narrative.

Connie’s years of experience in science writing help her make this complicated topic clear and accessible for a general reader. It’s a sobering analysis, and she doesn’t shy away from describing her own despair at times. She describes how global average temperatures are rising on a trajectory that could, within decades, propel us beyond far-reaching, irreversible atmospheric changes.

But in the end, A Sugar Creek Chronicle isn’t a gloom-and-doom book, for Connie is a person of faith. She believes that we can still prevent the most catastrophic changes and preserve the incredible biodiversity of this marvelous earth. The book includes steps we can take in our personal lives, and public policies we can support.

“My guess is that even if you have not lived in a rural woodland, our lives are in some ways similar. You too have loved family, treasured a special place, worried about illness, been touched by beauty and by loss, felt drawn to things nonhuman, wondered about our rapidly changing world, and worried about where the future is taking us. You too have wanted to leave a legacy of a better world.”

A Sugar Creek Chronicle is part of the fight to create that better world. 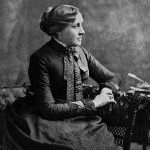 March 28, 2016
Little Women and the Word: What Would Alcott Think?
Next Post 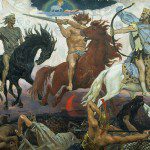 The 50 Miracles of Jesus: Fact...
Wake Up Call
Related posts from Holy Rover