Zach worked on his poster project with Jeff this morning and then translated his Spanish report back into English so he could use it with his poster.  Ezra worked all morning on a report about ancient African blacksmithing.  Their godmother flew in after being gone a month, so we went to the airport to pick her up.  While there, Zach worked on multiplication while Ezra read some more about Great Zimbabwe.  We went out to lunch with their godmother.  When we got home, I met with a mother about next semester’s math class while the kids played.  After the mom and son left, Zach went out to play with neighborhood kids while Ezra cried that I wouldn’t let him out until he finished his report.  He spent twenty minutes crying and complaining and fifteen minutes finishing the paper. 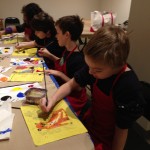