The Greatest Sweepstakes EVER

My aunt has won vehicles in sweepstakes contests. Not once. Not twice. But THREE TIMES. Impossibly good luck? Maybe that too. But mostly, it’s because of the sheer volume of entries. Filling out those forms is how she unwinds. She doesn’t knit or watch junk tv or go on frivilous shopping errands. She does plenty of worthwhile things in her very full and busy life, like granparenting and teaching nursing students and being a full-time minister’s wife, just to name a few. But when she has downtime and needs to be still for awhile, she fills out those little cards and mails them in.

Now, she’s won many, many other things over years of doing this. But i find it worth noting that she’s won a car–which most of us would equate to the lottery/getting struck by lightning range of liklihood–THREE TIMES.

If you give yourself enough chances, you will see some returns. Eventually.

This is a major leap from my lovely aunt, but it’s kind of like Barney Stinson–America’s favorite man-whore. (well, i don’t know…mark sloan would give him a run for his money.) Ok, Barney Stinson, America’s funniest, gay-in-real-life-but-womanizing-on-tv man whore. In one episode–wherein Marshall discovered how easy it was to have graphs and charts drawn up to illustrate ANYTHING–Marshall did some figuring on how many women Barney propositioned in a given year; how many that added up to over several years; and how many of those women had actually said yes. What it came down to was this: Barney, skank-extraoridnaire, had an actual batting average of about .1%. And yet, his “list” (in another episode) was nearning 200+.

First let me just say (as did Barney’s friends): gross. But also, let me say–if you give yourself enough chances, you will see returns. Eventually.

Time for the inevitable evangelism moment. How many chances are we giving ourselves?
How often are you in a position to talk about your faith? And in how many of those situations to you actually speak?

Let me be clear: tracts are not acceptable. Knocking on the door of strangers is not advisable (unless they are neighbors that you need to meet). Bible thumping, finger pointing, and sinner-calling need not apply. I’m just saying: when was the last time that you invited someone to your church? Or shared a story of how said church has changed your life? Or told someone else about your experience of the holy?

It’s easy to do, but just as easy not to. We forget. Or we get squirmy about it. Or we simply think the chances of our own faith changing anything–or anyone–are one in a million. HOWEVER; i am not a mathmetician, but i know this much is true. Give yourself enough chances, and you will see returns. Eventually. Open enough doors, and eventually, the Spirit will move someone through…

I’d say more, but it’s my morning off. I’ve got some sweeps to enter. 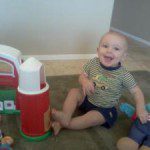