For Such a Time as This 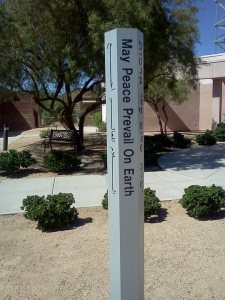 I was sitting on the floor of my crummy first-year-of-being-a-grownup apartment, doing grad school homework that i should have done the night before, and getting ready to go to class. Which means I probably shouldn’t have been watching tv, but was. When the plane hit the first tower, i went and woke up my roommate, who was still sleeping. “What? That’s crazy!” she said. I ran quickly back to the tv to find out what a breathless world was waiting to find out–what sort of mechanical error, personal mishap or weather condition might have caused such a thing to happen?

And for a small window of time, it might have been any of those things. But a few minutes later, I was back in my friend’s room. “No really,” I said. “You need to come see…”

As we approach the ten-year memorial of that horrific day, I’m hearing alot of these stories floating around. That morning has become the JFK moment for a generation. The moment of violent awakening, when the world we knew no longer made sense, and the world we  would live in was still covered in ash.

Like many faith leaders, I struggle with what worship should look like on Sunday. We don’t want to exploit people’s emotions to a point of self-indulgence–which is what I feel many “performance model” chruches do on a weekly basis. We don’t want to enshrine or romanticize the violence and loss of life. We don’t want our worship of the holy to become a political, patriotic, God bless America fiasco… How to honor the memory while still maintaining some theological integrity and timely, relevant gospel?

Maybe it starts with “where were you?…” But that is only the beginning of the journey. That day then, this day now, is not about where we were, or what we were doing, or the profound thoughts we had that day. Unless we were there and witnessed it in person, or lost someone that we loved, it is not about us. We will honor life that was lost, and we will pray for those who mourn.  But more important than our own memories (unless you lost someone close to you) is the question of what changed in you, and where you are now.

What shape has our changing world taken since that day? And how has God gifted us, powerfully, uniquely, wonderfully, to be a life-giving force in our time and place?

That’s what I’ll be talking about on Sunday, anyway. By all means, take a moment to remember where you were, who you were with, how you were changed… but don’t dwell there. Don’t relive the horror, the media-induced PTS that we all endured together.

I was inspired by this piece in Redbook Magazine this month… It’s about several impressive young adults who were children on that day. Some lost parents, some were evacuated from the school across the street. One young woman talks about being a Muslim child in New York; and how different her life became on September 12. Each of these young people, however present and real their tragedy, was determined that the worst day of their lives would change them for the better. Each of them preaches a powerful gospel, that the day we remember with such fear and terror, continues to shape them for good.

Can we say the same? Wherever we were that day, and however we were changed, what good is the story if it is only for and about ourselves?

Speaking of me… I’ll tell you what i did after i woke up my friend. I did NOT finish my homework. But i did get in the car and go to school. Because when I said grad school, I meant seminary. And it was Tuesday, which was chapel day. Whatever I was feeling, I did not want to be alone in it. I wanted to be with other people who knew, however dimly at the time, that God was calling us to serve in a stricken, blown-apart world. A world that, even after the dust settled, would never be the same. I needed a place to remember that it was not all about me, or the fear that was threatening to swallow me whole.

Many hurting people will seek sanctuary in our communities this week, not wanting to be alone, not wanting to be swallowed by the darkness. They will be wanting to remember where they were that day, and maybe talk about it. We can give them that. But we will also give them some good news. The good news is, it is not all about you. Which is to say, you are not alone. Everyone is hurting, everyone is scared, everyone is fleeing the darkness. The good news is, God was with us on that day, and God is hanging around even now.

The gift that faith communities have to give is this time, our time…And a call to be a prophetic and powerful force of life in the time to come. “For Such a Time As This,” we do not worship acts of terror. We worship a living God who moves and shapes us, on our best and worst days. Never doubt that each and every one of us has a calling, a purpose, a gift, to bring life out of the dust. Not by rolling in it, but by seeking others who flee the darkness, who say no to terror, and who have stories of hope to share. For such a time as this, you were born. And you are living still.