I was cooking dinner and trying not to get sucked in. It is only September. Of the year BEFORE the election year. I am not ready for the emotional angst, the loaded sermon fodder, the toxic wasteland that is partisan rhetoric. It was on in the background, but I was determined not to engage.

When I heard the applause, I turned around. I’m listening now,  i thought numbly. I looked to see if I’d really heard what I’d just heard. My husband and I looked at each other, appalled. “Rewind that,” I said. Because I just couldn’t quite believe it. A painful few seconds, there it was again. Applause. No, wait… thunderous  applause. At the mention that Rick Perry’s state had executed more inmates than “any other governor in modern times,” the gathering clapped and cheered their approval.

That was not the worst of it. After a spiel about “ultimate justice,” the congregation went wild again.

Because let’s be honest. That’s what it was. A congregation. Worshipping at the altar of blood lust, revenge, and an utterly western  interpretation of what “justice” means.  (By “western,” I mean American, not Texan).

When Brian Williams asked the candidate if he ever struggled to sleep at night, wondering if any one of those might have been innocent– Perry replied, “No, sir. I’ve never struggled with that at all.”

Really? 234 executions, of people that (I’m guessing here) the governor has never met in person, and he lives with no shred of doubt that a single one of those inmates was wrongly accused, tried, or sentenced?  At least 2 of those executions was highly questioned and even discouraged by the U.S. Justice Department and the United Nations. Another was found—after the execution had been carried out—to have very little evidence against him. This from ABC news this morning:

“Perry’s most controversial death penalty case came in 2004 when Cameron Todd Willingham was executed for the murder of his three daughters in a fire that investigators ruled as arson…scientists developed a report questioning the legitimacy of the evidence used against Willingham. Following Willingham’s execution, the Texas Forensic Commission ordered a re-examination of the case, and Craig Beyler, a fire scientist, examined the evidence and came to the same conclusion as other scientists: no evidence existed to conclude arson was committed…Just before Beyler was to present his evidence to the commission, Perry replaced the chair of the commission, who cancelled the meeting. The commission’s work was never finalized, leaving many asking whether was an innocent man executed.”

Apparently, Rick Perry never saw that memo. Or else he’s got some wicked good Ambien.

But let’s take him out of the mix for a moment. We know that many politicians are corrupt. We know that the justice system is broken, and that “fair trial” and “ultimate justice” are terms they throw around to help us all sleep a little better at night. Forget which candidate we are talking about, and let’s look again at the congregation. The cheering, applauding congregation, wild with enthusiasm that those were bad guys and we got ‘em. I’m still processing all this, but I’m not gonna lie… it took me to a dark place.

For one thing, it brought to mind the cheering, chanting frat party that erupted on the White House lawn the evening of Bin Laden’s death.

In the case of that particular bad guy, I’m glad they “got ‘em.” HOWEVER, it is the celebration that does not sit well with me. As a good friend and pastor—who is also an Army chaplain—said on that particular day: “Isn’t there some medium between ‘How dare we celebrate violence?’ and ‘USA! USA!” It was an excellent question. And the answer is, yes, there is.

The middle ground lies in the struggle. The acceptance that, when violence becomes necessary to eliminate a threat, it is just that. A necessity. A regrettable, painful, God-forgive-us-but-this-is-the-only-way moment of humanity. Something to be mourned and reflected upon, but never celebrated.

And while Osama Bin Laden was an immediate threat, I’m not convinced that every innocent person who died on the way to “we got ‘em” was a justified loss of life. I’m also not convinced that every person executed in the state of Texas—or Arizona, or elsewhere—was such an immediate threat. Not when life behind bars was an option. Not when, as is so often the case, there was reasonable doubt surrounding the guilt of the condemned.

I am against the death penalty, but this is not about that. One can be in favor of capital punishment without cheering the death of a criminal. It is the cheering that sells our souls. It is the applause that lets us sleep at night without blinking. It is the act of celebrating death that makes us criminal ourselves, and that excuses “killing justice” without the need for an internal–and collective–struggle.

People who lost loved ones on September 11 experienced a much more complex journey of emotions when Bin Laden died than those who showed up to party at the White House. Families who go to witness the execution of a loved one’s murderer… they don’t cheer. They don’t applaud.

They struggle. They struggle to find meaning and hope. They struggle to preserve something of the life that was lost to them. They seek to construct something life-giving out of the chaos. It is a struggle, but that is how civilized society survives tragedy. And that is how the soul overcomes the cost of living in a violent world. We struggle, we grieve when people die, and we grieve when violence begets more violence because it is the only way we know.

God forgive us when we’ve forsaken the struggle for life in favor of the death party. I don’t know about you, but I didn’t sleep so great last night… 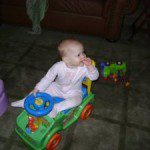 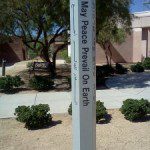 September 9, 2011 For Such a Time as This
Recent Comments
2 Comments | Leave a Comment
"This is what the 'RIGHT WINGNUT SO-CALLED CHRISTIANS" have done. They have made JESUS A ..."
Bob Peacock Whose Flag Do You Carry?
"Had to share:Deer in Nara Japan. They have their run of the city and are ..."
Tuxedocat Passing By
"I live in a rather densely populated part of Northern NJ. Anywhere you see more ..."
Tuxedocat Passing By
"This nation has only ONE flag and that is the American Flag. The Christian flag ..."
Judgeforyourself37 Whose Flag Do You Carry?
Browse Our Archives
get the latest from
Irreverin
Sign up for our newsletter
POPULAR AT PATHEOS Progressive Christian
1

The Trump Brand Is Going Down...
Kermit Zarley Blog
Related posts from Irreverin