I swear I didn’t lose it on purpose.

Here’s how it happened. When my daughter was a baby, my friend Rachel bought her an Elf on the Shelf. I didn’t actually get it out of the box until she was about 3, and my son was 1. My daughter promptly named the elf “Rachel,” and here’s the CREEPIEST thing–she had not seen aunt Rachel, the PERSON, since she was a baby. Had no idea this elf came from aunt Rachel, the person–because, hello, elves come from the NORTH POLE. So, how the elf became Rachel the Elf will always be a great cosmic mystery to me, proving that some things are transformed, magically, by the people who touch them. So there’s that.

Anyway, the look on their faces was priceless as, each morning, they found Rachel (the elf) in her new hiding place. Sometimes she’d be in a cereal box in the pantry, some days hanging upside down from a light fixture. I once dropped a cast iron wall sconce on my toe in the middle of the night, trying to fixate the *%&$@^ elf into a whimsical position. (I never did let that elf make big messes that SOMEBODY would have to clean up the next day). I was grumpy about it sometimes, but it was worthwhile to see them shriek with delight as they found her hiding place each day.

Sadly, Rachel (the elf) was lost in the move from Phoenix to Kansas City. (Rachel the Person–I’m sorry! I hid her so the kids wouldn’t find her during the year and…I hid her so well that the new residents have probably not even found her yet). And so it was that we have not had an elf in our house for the past two Christmasses. But we still have the book, and we still read it. So every year the kids wonder if maybe an elf is coming.

I know. I KNOW I could go buy a new elf. Or even make a super low-budget, your-mom-is-a-slacker elf and tell them the North Pole has experienced some cutbacks in the uniform department. But I’m struggling with the whole “you’re being watched” thing. Some of that’s because I have an anxiety disorder that I’m hoping not to pass on to my kids through some unfortunate combo of nature and nurture. And also because I suspect the whole “Santa knows if you’ve been naughty or nice” message is rooted in an archaic image of a judgmental God.

For many families, the elf ritual brings great joy. I love seeing the pictures that my (more patient and creative) friends post of the elfish shenanigans that take place in their house. If it works for your people–no judgment here. I’m just offering a counter narrative for those who might find the elf troubling (or find his little face to be the stuff of nightmares).

I worry less about the elf itself, and more about the larger messages we send to our kids about whether they are “good” or “bad.” This year, I want to tell my kids that they are good. Every day. Because every day, they are.  So this morning, a Magic North Pole Penguin showed up at my house. He had a letter from Santa with him. (Yeah, it rhymes, deal with it). The gist of it is, ‘you kids are so good, Santa didn’t feel the need to send an elf to watch you. Instead, he sent ME (the penguin) to bring you small surprises in your Advent calendar each day; and to help you remember the story of Jesus, and to do kind things for other people during the Christmas season.’

Before you start preaching at me about Generation Entitlement, spoiling kids rotten and “this is what’s wrong with America!” let me clarify –telling kids they are “good” is not the same as telling them that they can do no wrong. I figure they’ve got their whole lives to navigate all the ways the world tells them they are not enough; not pretty or thin enough, not rich enough, not smart enough, not successful enough, not cool enough, or Lord help us, not sexy or promiscuous or dangerous enough. And I figure we’ve got miles of middle school, high school and young adulthood to deal with all the consequences of bad choices. For now–for this precious window when everything about them really IS good and sweet and pure–I aim to tell them that they are, inherently and by the very virtue of their being –good. And enough. And deserving of love, and yes, presents.

Also, lest you think it is all magic penguins and rainbows and unicorns at my house, let me be clear; most days, I yell about somebody not having socks on yet. About some mess that got crammed under the furniture instead of cleaned up. We holler about, for the LOVE OF ALL THAT IS, the toilet that never seems to get flushed, ever; or the meal time drama that unfolds nearly every evening and stretches all the way to bedtime. JUST EAT. SIT DOWN AND EAT. And no you aren’t getting dessert if you eat 2 bites of salad…

But none of these things –not the fight for the remote, or the stomping of feet, or the epic mess that lives under their beds–means they are bad. It means they are behaving badly. And that, we deal with. We may revoke privileges, we may exile to rooms, we may holler sometimes. But ultimately, telling kids that they are “good” can be a powerful self-fulfilling prophesy. Telling them that they are good–and blessed and beloved, no matter what their choices or behavior–will ultimately translate into reality.

If our kids are programmed to KNOW that they are good–then we can respond to their rotten behavior by saying, simply, “That’s not who you are. This is not what’s expected of you. You can do better.” And, I have to believe, they will.

Anyway. It’s not a perfect plan. But with all the suffering and heartbreak in the world right now, it’s what I need, at my house, right now. If your kids have been holy terrors lately and the elf puts the fear of God in them –so be it. Do what you’ve got to do. Or maybe you even USE the elf to affirm your kiddos in their awesomeness.  I’m just feeling that I spend a lot of time scolding my kids for things that are so small, in the grand scheme of things… Or, specifically in regards to my daughter, screaming at her like a lunatic because she is acting just like me. Mercy, that happens a lot.

So as much as I will love watching their excitement as they pretend to believe that THIS PENGUIN IS ACTUALLY WRITING THEM MAIL –really, this is a discipline for me. It is a season to remember that every baby born, no matter who they grow up to be–every child of God comes to the world as hope, as blessing, as the very breath of life. God with us.

And it is good. 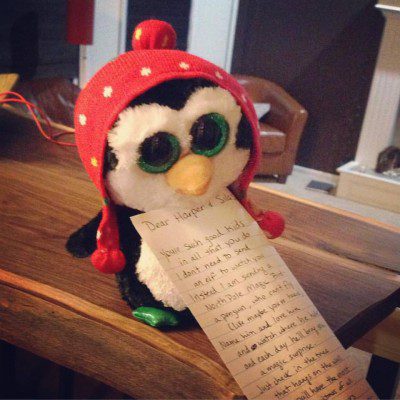 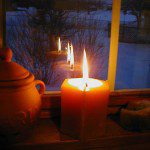 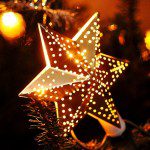 December 3, 2015 Come Darkness, Come Light
Recent Comments
0 | Leave a Comment
Browse Our Archives
get the latest from
Irreverin
Sign up for our newsletter
POPULAR AT PATHEOS Progressive Christian
1

Christians, It's Time to Admit the...
FreedHearts
Related posts from Irreverin