The Unfriend Trend: Why You Should Stop Ditching All the Trump Supporters

Maybe Jerry Falwell, Jr was right. Donald Trump IS, in fact, like Jesus Christ. At least, in one major way.  He has come to set father against son, mother against daughter, and mother-in-law against her daughter-in-law. In many cases, our enemies are members of our own household.” Further, nation shall rise up against nation. He comes not to bring peace, but a sword.

Dear Mr. Trump–I do not think that means what you think it means.

But he’s beside the point. Sort of. Fact is, this whole campaign is letting us know who our friends are. And maybe, who they’re not. I’ve seen countless people post angrily on their social media sites, “IF YOU ARE A DONALD TRUMP SUPPORTER, GO AHEAD AND UNFRIEND ME NOW.” And this morning, lots of folks are sharing a link to this website, which allows you to see which of your friends, in fact, have boarded the crazy train…so that you can delete them.

Listen, I get it. I really do. I know it feels good to cut these folks off. Not only do you want to hide their awful posts, you also want to make a point with your click finger. Or some other finger. It is maddening when people who we thought we had something in common with–whether a shared alma mater, the same neighborhood association, or the same gene pool–turn out to be a part of the social phenomenon that is keeping you up nights and causing you to cruise Canadian real estate sites.

But if you start deleting half of your friend list, I promise you, that does not solve anything. In fact –that is exactly what his campaign wants. 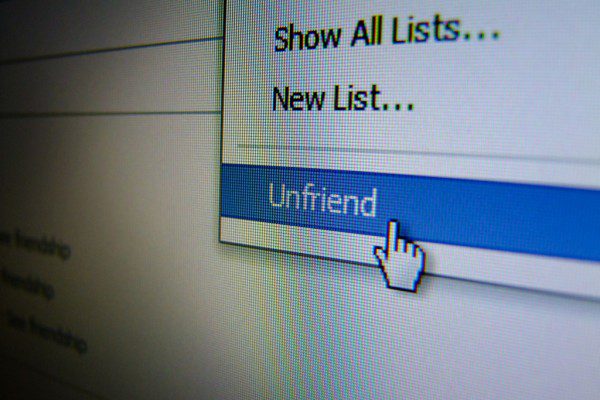 This is how fascists take over the world.

Every time you click that “unfriend” button, a Tea Partier gets his wings. The divides we draw are getting deeper and deeper, and fundamentalists feed on that business like dementors on happiness. It makes them stronger. And us much, much weaker.

When you cut a Trump supporter out of your life, what you’re doing is banishing them to their corners of like-mindedness. Dark and shady corners where extremism becomes more and more normalized; until it seems like the most natural thing in the world that we should build internment camps for Muslims and establish the KKK as a 501-c3. And anyway, whose idea was it that women should be able to vote? What happened to the good old days? We shall make America great again!

Instead of unfriending people who like Trump, stay in their circles and consistently post smart, sane and basically decent-human things in your newsfeed. Force them to endure occasional dissent. Engage. Find out WHY they think this is a good idea. Maybe push back a little. This is what is known as civil discourse, and it is the whole point of democracy. If we stop doing this uncomfortable work, he has already won.

And anyway, it’s not good for the rest of us, either: to sequester ourselves in safe little pods of moderate-to-progressive friends who all carry the same ideological banners. This is how Mitt Romney lost in 2012. Not that I minded–but it was an important lesson for all of us, on both sides of the aisle. Romney supporters watched only Fox News. They listened to only conservative commentary, connected in distinctly Republican circles, and basically surrounded themselves with like-minded people who always had positive things to say about the campaign and its followers. Know what happened? Obama happened. And Romney’s people were completely blindsided, because they had so thoroughly convinced themselves that the bubbles they built for themselves were, in fact, the whole world.

It sure would be nice to have Romney back, right about now, would it not?? But moderation does not survive clannishness. Let that be a lesson…

We do this all the time. We try to find the whole world in a bubble. And if we can’t, we build our own. That works for awhile. Until the bubble pops, and we are standing there on election day wondering where in the world all these other people came from.

Hang in there, folks. I know it is ugly, but stay strong. Do not abandon your mother, or your grandfather; do not unfriend your college roommate; do not stop speaking to your neighbor. That is not the American way. It is not the Christian way. And it is not the way of progress. Take a deep breath–maybe have a drink or something–and repeat after me: “I don’t agree with you. But maybe we can have a conversation about that?” 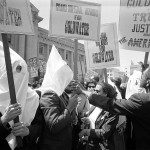 March 2, 2016
The Trump Rally is the New Klan Rally
Next Post 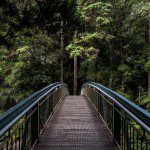