Trump as Messiah: The Billboard Is Gone, But the Sentiment Remains

If you live in the St. Louis metro and you drive home on I-70 in North County, you might be tempted to shut your eyes.

Don’t do that. It’s dangerous, and we need you alive to vote. Keep your eyes on the road. But avert them from the giant billboard: proclaiming Donald Trump as Lord and Savior of us all.

I’m not even kidding. Look how gross this is. 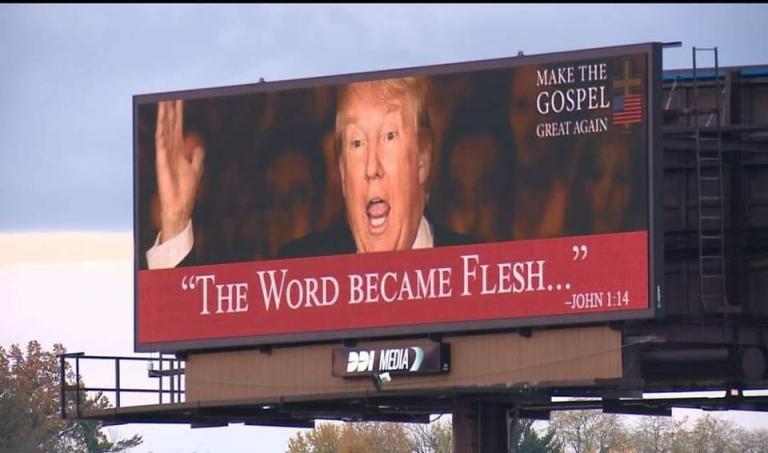 I struggled with giving this image any more exposure. At the same time, it’s important to know that there’s a demographic of people in this country–probably a broader margin than we’d like to think–who are Christians; and who think that Trump is somehow ordained by God to be our leader.

That’s problematic enough, to think that God would ‘choose’ someone so overtly hateful, greed-driven and incendiary to be in a position of power. But this message jumps the shark entirely, suggesting that Trump IS the “word made flesh.” If you aren’t familiar with scripture, “the word made flesh” is a term used by John the Baptist to describe Jesus as the Messiah; God’s presence embodied in human form and come to earth.

So–this billboard basically says that Trump is some second-coming-of-Christ situation.

To me, this seems like the sort of ad someone would design if they wanted to shame America for its corrupt, racist, greed-driven, dark money brand of politics. But it was clearly meant as an endorsement for both Trump and Christianity.

At best, it is garbage theology; at worst, it indicates the roots of a fascist dictatorship. Once a population becomes convinced of the divinity of its leader, you can kiss democracy good-bye. Scary part is, the WHOLE population doesn’t have to believe it in order for the narrative to take hold.

I want to believe the “not all Republicans” thing. I want to believe that many of those who voted for this administration did so out of a desire for the greater good, and are not pleased with how this is going; and that, however their values might differ from mine, they will AT LEAST acknowledge that this man’s leadership is about as far from Jesus as you can get. But “moderate” Republicans are running out of chances to prove their moderation; and to save their party from this toxic marriage of theology, ideology and policy.

Perhaps it should go without saying, but just in case: Let’s talk about a few Ways Trump Is Not Jesus.

When I asked my 8-year-old to help me think of ways Donald Trump is not like Jesus, he said:

-He doesn’t like people not from this country.
-He has a terrible face.
-Jesus doesn’t command the military…
-and Jesus shares things.

Nailed it. (This message brought to you by the wonderful Sunday School teachers and children’s ministry team at my Saint Andrew Christian Church!)

It’s a good list, but really, we can distill all of this to one main indicator that Trump is not the Messiah. Primarily, Jesus came to be the antithesis of empire. And Trump is the very embodiment of it.

Everything about his leadership– and the twisted gospel of this billboard–is LITERALLY what is meant by the “Anti-Christ.” Stephen King could have a field day with a Trump/Randall Flagg crossover character. He’d most terrifying adversary of all time. (Like, maybe he morphs into a huge black crow with orange hair? I’m having nightmares already).

More concerning than the extreme notion of Trump as Lord and Savior? The number of Christians still supporting this administration. They may not think he is the literal 2nd coming… but they still advocate for his policies, in spite of his “Anti-Christ” way of leadership. I won’t speculate on their motives or reasoning; anyone, from any party or religious backgroun, still supporting this administration– and its cruel, death-dealing policies– enables a far-right fringe who want to prop him up as a demigod.

I assure you, that will end badly.

As for the billboard itself… it is gone now. I guess that is good news? But know this: the sentiment remains. The implications cannot be overstated: leaders who are propped up as demigods tend to establish bloody fascist regimes. And with escalating violence against Jews, people of color, progressive politicians, and immigrants… it cannot be denied that he’s already nudging us in that direction.

For some levity–check out what some good folks have done with the domain names “Make the Gospel Great Again.” This link will now lead you to some real Christlike leaders, working for real change that reflects the gospel I know.

If nothing else, consider that grotesque billboard a friendly motivational reminder to GET OUT THE VOTE tomorrow. And as you go to the polls, remember that God is not the God of any one party or candidate…and God is certainly not the God of our consumer culture, our capitalist society. But go vote anyway. Vote your faith, vote your values. Vote to push forward leaders who might actually lead in the spirit of Jesus… without claiming to be him. 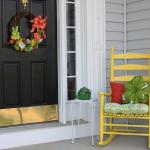 November 1, 2018
Door to Door: The Powerful Art of Neighboring
Next Post 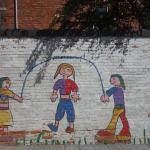 November 6, 2018 The Kids Are Listening
Recent Comments
0 | Leave a Comment
"(1) I live in New Zealand, a country with socialised medicine and welfare services, and ..."
RossM At the Same Table: On God’s ..."
"RossM, the issues of poverty that the middle class and retirees face in the US ..."
Judgeforyourself37 At the Same Table: On God’s ..."
"Give up something harmful. Like Christianity. This will help. https://uploads.disquscdn.c..."
Robert Conner 7 Things To Give Up For ..."
"Quit the church, and accept the fact that Faith is a major part of the ..."
BIRich “The White Man’s Guide to Not ..."
Browse Our Archives
Follow Us!