Preaching Out Loud: Why Everyone’s Talking About This Episode of Queer Eye, And What The Church Can Learn

June 24, 2020 by Erin Wathen
0 Comments
Preaching Out Loud: Why Everyone’s Talking About This Episode of Queer Eye, And What The Church Can Learn June 24, 2020 Erin Wathen

Have you ever noticed that most ministers on TV shows are completely unbearable?

They’re either flat, boring characters; total prudes, out of touch with reality and culture; or else they’re sinister, evil, and abusive. Or, you know, they just wear THE WRONG LITURGICAL COLOR FOR THE SEASON, which is the producer’s fault and not the writer’s, but still. Once on Orange is the New Black, Piper’s brother crashed Grandma’s funeral with his fiance’, and they got up front during the service and said, ‘hey guys, since we’ve got the whole family here today, we’re gonna just go ahead and get married right now!’ And the minister got this deer-in-headlights look and then pretty much just performed a wedding in the middle of the funeral with no prior discussion with these people, and I stood up in my living room and shouted at the screen that’s not how this works!!

There are a few good TV clergy, of course. Friday Night Lights (Smash’s pastor/Waverly’s Dad); Gilmore Girls (Rev. Skinner); Parenthood (Jasmine’s mama’s pastor who marries Jasmine and Crosby); and Hart of Dixie (hella cheesey show, but a great town pastor who gets into neighborhood shennanigans like stealing the Mayor’s pet alligator. As you do).

What each of these fictional pastors have in common is an element of humanness that makes them seem like real actual people. They are compassionate, or they are smart-asses, or they have a life outside of church. Imagine! But none of them hold a candle to America’s current favorite TV pastor– Rev. Noah from S.5, Ep. 1 of Queer Eye.

What’s Noah got that none of the others have? He’s real. 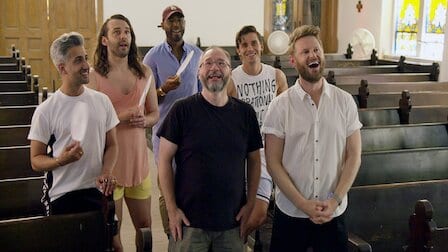 Everybody is talking about this episode, aptly titled “Preaching Out Loud.” The guys travel to Philadelphia to do their lifestyle overhaul deal with this ELCA minister, an out gay man, but who has never really been comfortable with his identity. Even though he is now an ordained minister, he has never really overcome the harmful messages that he received as a child…from his church.

He was nominated for the show by the leaders of the church he now serves. First of all, they are just the most delightfully scrappy group of church leaders you’ve ever seen, and I adore them. Also– it was a profoundly loving thing they did for their pastor, wanting to see him become more confident, find more joy, and live his life more fully.

What I heard them say, though they didn’t say it? “We love him. We want him to love himself too.”

Yeah, I was a weepy mess about 5 minutes in. So was everybody else I know who watched it. Go see for yourself, and enjoy the journey of this man as he learns to be more comfortable in his skin; as he embraces his identity; as he celebrates his church’s 125 year anniversary (stop, I can’t); and as the whole neighborhood, including an ecumenical smattering of clergy colleagues, fills the (newly-painted and rainbow colorful!) sanctuary to mark this milestone. It’s just all too much. In a good way.

There are reasons everybody is talking about this episode, and not just me and my clergy-nerd friends. I think it speaks to the deepest needs that people are feeling right now in the midst of pandemic, uncertainty, civil unrest and general awfulness.

For one thing, it’s a true transformation story. I mean, that’s what this show is about, right? Transforming people lives so that people can be their truest selves, connect more deeply with those around them, and find joy in their daily lives. But this episode gets beyond one man’s journey, and you catch a glimpse of how this whole community might be transformed by his presence and leadership. Which means– it is a story about true community, something else that folks are craving intensely right now.

Also, there’s joy. You watch and tell me, when was the last time you saw that much joy backlit by stained glass? On television or elsewhere? And, underwriting all of that– there is authenticity. Raw, real and lovely.

It’s the absence of that very thing that makes most TV preachers so cringe-y to watch. But maybe those fictional ministers are not so fictional at all; perhaps they are reflective of many people’s actual experience of clergy. Or rather– they are an embodiment of how people have experienced the church. Out of touch and irrelevant; or cruel, judgmental and sanctimonious. Maybe those stereotypes are more rooted in reality than we church-going folks would like to believe.

Maybe we could change that by being more like Noah and his church council. More authenticity. More joy. More nudging each other into new spaces. More trying on the jacket that we would never have chosen for ourselves–but that, somehow, fits just right.

It’s not lost on me that this season was filmed pre-quarantine. It is a gut-punch, just seeing a sanctuary full of people on the screen; a choir singing together, people shaking hands, cookies and coffee set out to be shared for fellowship time after.

But those are just the accessories. And while Tan would certainly tell us that accessories are important, the real beauty in this episode is its reminder that true inclusion transforms the church– and also changes lives outside of the church.  Diverse leaders, bringing diverse gifts and voices, create a presence in neighborhood that is real and relevant. And there is tremendous healing in bringing your whole story with you–but finding that you are not bound to it. The Spirit of the living God that shows up when we gather and let people be who they are? That, folks, is the gospel. That is what’s real, and not cooked up in a writer’s room or staged on a set.

It’s June. It’s PRIDE month. It makes me sad that so many of our churches still struggle to tap into this deep need of the human spirit, and this deep need of our communities right now– to be real, to be joyful, to celebrate who we are, and who our neighbors are, without judgement or condition. It’s heartbreaking that many churches continue to preach the kind of message that some children will find themselves having to unlearn later in order to be who God made them to be.

But just every now and then, the church has another kind of story to tell, another kind of invitation to share. When that happens, we might glimpse the kingdom of Heaven in real time– or maybe even on TV. And that is joy. 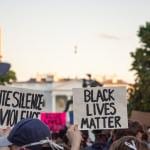 June 8, 2020
Truth and Transformation: Can The Church Survive Confronting Racism?
Next Post

July 3, 2020 Wait For It: Is the Church Going to Be A Hamilton, Or A Burr?
Recent Comments
0 | Leave a Comment
"When the United States began, most patriots considered their patriotism in relationship to their home ..."
Caliban Whose Flag Do You Carry?
"All peace and joy on your journey!"
Patrick Along For The Ride
"I'm sorry to hear about your daughter. It's heartbreaking to hear of a parent burying ..."
Cynthia 10 Ways to Care for Someone ..."
""I'm so very sorry/I'm so sorry for your loss," sincerely meant, is actually enough...no religious ..."
J.D. 10 Ways to Care for Someone ..."
Browse Our Archives
Related posts from Irreverin