Challies’ View of Guilt & Shame is Half Right 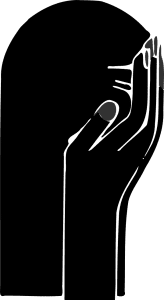 This past week Tim Challies posted his thoughts about guilt and shame. His view is representative of most people evangelicals I meet. Because his comments are so conventional, they unfortunately are very incomplete and need clarification.

I appreciate our brother’s blog. His suggested resources and commentary is often helpful. However, in this instance, his perspective is only correct in part. In this post, I would like to clarify the significance of guilt and shame within the Christian life.

Although my comments don’t directly contradict Challies’, they complement his ideas such that readers should see a distinct contrast between us concerning how we should understand these two concepts.

For a fuller discussion, see chapter 4 of my Saving God’s Face: A Chinese Contextualization of Salvation through Honor and Shame.

Here is how I differentiate between them: Guilt is the objective reality that I have committed an offense or a crime; shame is the subjective experience of feeling humiliation or distress because of what I have done. God has made us in such a way that sin incurs guilt and guilt generates shame.

The major problem here is that he only defines guilt as objective and shame merely as subjective. Both definitions are half-truths.

Challies’ view is mistaken in what it omits, not what it affirms. Although he doesn’t state it very clearly, he seems to acknowledge that guilt does a subjective element. He writes,

When I sin against God I may find that my conscience accuses me, that it convicts me that I have done wrong. My guilt, the realization that I have sinned, brings a feeling of shame.

He alternates between two senses of “guilt”, first speaking of an “objective reality” and then referring to it as “the realization that I have sinned.” In discussions about guilt and shame, we desperately need to be careful and consistent in the way we use our terms.

On the other hand, shame also has an objective aspect. 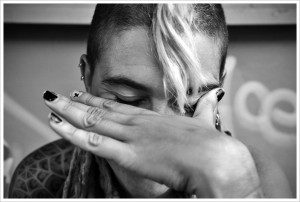 Because of sin, we become shameful and worthy of dishonor. In other words, in the eyes of God and His people, we have shame. As in The Scarlet Letter, the main character feels shame (subjectively) in part because she bears her shame in the letter “A”, which is patched to her clothing (signifying her objective status within the community).

As I write in Saving God’s Face,

“‘Shame’ is the ill repute brought upon a person for some perceived deficiency or failure to meet the standards issued by his or her community” (p. 6).

To put is bluntly, sin is bringing shame or dishonor upon God’s name.

Challies says that guilt refers to an “offense or a crime”; however, this is only true from the perspective of one single metaphor –– the law metaphor. This is true as far as it goes. However, what if we were to switch the metaphor? For example, when using familial language, one would not typically say (s)he commits a crime against my father.

That confuses the way language works in different contexts. Perhaps, a child disrespects or even disobeys the parent, yet that is still not considered a “crime” (which is language befitting a legal setting). 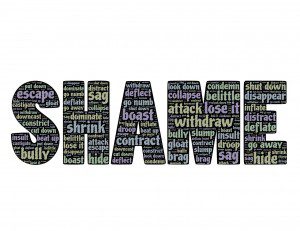 Even though Challies’ post is called “The Guilt and the Shame”, there are in fact multiple guilts and shames. If we miss this point, we will under-estimate and overlook the role of shame within the Christian life.

Finally, Challies misunderstands how shame and guilt work. When we are unclear about a problem, the solution is muddled in our minds.

Here is how he conceives the solution to shame.

He treats shame as though it were a legal problem that could be taken care of with a mere transaction or legal exchange. This is not helpful because it can only possibly be “true” (in some sense) if one offers a lot of qualifiers and explanation.

The basic difference between guilt and shame is not that one is “objective” and the other “subjective.” Rather, guilt is about what someone does (or doesn’t do). Shame is about who a person is.

Also, if we only use Challies’ subjective definition of shame, it does not make sense to say that Christ should feel humiliation for sin he didn’t commit. Shame is not transferred like numbers on a ledger. This is a category mistake.

Shame is dealt with in a different way. It is more relational than legal (though legal problems can certainly impinge one’s social standing). Shame is taken away when one is accepted and included, valued and treasured. To be reckoned an “insider” brings honor where there was shame. Likewise, the sinner’s heart, which dishonors God, must be changed so that it glorifies or delights in Christ above all.

I pray that this post helps my brother and other readers to give further thought to the subjects of guilt and shame. As people reexamine their assumptions, many will see that shame and honor have far more significance in the Bible and our lives than is commonly thought.
FYI –– Andy Crouch has written an excellent article in Christianity Today called The Return of Shame. He helpfully addresses both the theological and psychological aspects of shame. 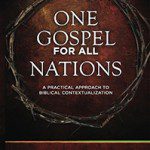 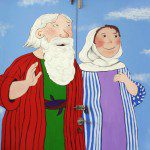 September 16, 2015 Why the Abrahamic Covenant IS the gospel
Recent Comments
0 | Leave a Comment
"Thank you for this article. With all due respect, I am not convinced. Why? First, ..."
Salvatore Anthony Luiso When does masculinity and femininity become ..."
"A very interesting webinar! What application do you use to record your videos? I found ..."
Free Cheats “Confucian Shame in Christian Thinking” webinar ..."
"Thank you for this article. I suggest you mention that the authors of the two ..."
Salvatore Anthony Luiso Defining masculinity and femininity biblically is ..."
"Knowing that God is your father has an amazing effect on one's self-esteem while inspiring ..."
Karen Silver Jesus experienced shame, not low self-esteem
Browse Our Archives
get the latest updates from
Jackson Wu
and the Patheos
Evangelical
Channel
POPULAR AT PATHEOS Evangelical
1