The latest issue of Themelios is out. Here are a few articles and book reviews I think you might find noteworthy.

Wendell Berry’s “Risk”: In the Middle on Gay Marriage? by Jacob Shatzer

Wendell Berry’s influence has grown in recent years as many people, Christians or not, have found his agrarian vision a compelling corrective to various modern problems. However, Berry publicly took what we might call a “middle road” on gay marriage. This position surprised (and disappointed) many evangelicals that do not agree. But how does Berry’s position on gay marriage stand up to Berry’s own criticism? Does he agree with himself?

A Missiology of Excluded Middles: An Analysis of the T4T Scheme for Evangelism and Discipleship by George A. Terry

This article analyzes the theological premises of the popular T4T model for evangelism and discipleship. The analysis argues that the T4T scheme largely depends on several false dichotomies that do not engage the Scriptures except in order to proof text and it regularly excludes the middle area that conveys the biblical balance. The result is an overly rigid methodology that undervalues the influence of context in cross-cultural communication. Rather than a theological vision that holds in biblical tension both truth and context, T4T sanctions an inflexible evangelism scheme that is more conducive to receptive audiences and a discipleship model that is more conversant with what is expedient than what is biblical.

(I wrote my own review yesterday on this blog.)

Allen Yeh’s Polycentric Missiology: Twenty-First-Century Mission from Everyone to Everywhere

John Nugent’s Endangered Gospel: How Fixing the World is Killing the Church

Ambrose Mong’s Guns and Gospel: Imperialism and Evangelism in China

The Angola Prison Seminary: Effects of Faith-Based Ministry on Identity Transformation, Desistance, and Rehabilitation (by group of authors)

Dan Wu’s Honor, Shame and Guilt: Social-Scientific Approaches to the Book of Ezekiel

David Starling’s Hermeneutics as Apprenticeship: How the Bible Shapes Our Interpretive Habits and Practices 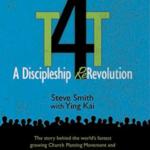 August 16, 2017
A Balanced Critique of Popular Missiological Methods
Next Post

Evangelical
Separating for the Sake of Church Unity
Jackson Wu