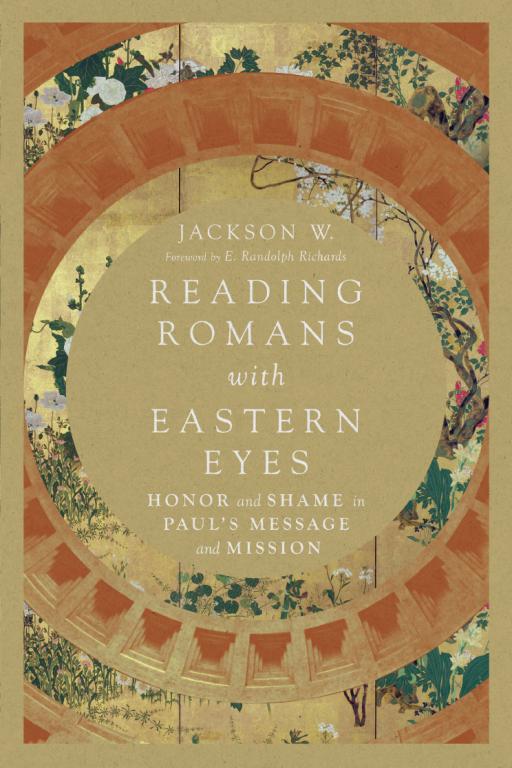 From the Back Cover

What does it mean to “read Romans with Eastern eyes”?

Combining research from Asian scholars with his many years of experience living and working in East Asia, Jackson directs our attention to Paul’s letter to the Romans. He argues that some traditional East Asian cultural values are closer to those of the first-century biblical world than common Western cultural values. In addition, he adds his voice to the scholarship engaging the values of honor and shame in particular and their influence on biblical interpretation.

As readers, we bring our own cultural fluencies and values to the text. Our biases and backgrounds influence what we observe—and what we overlook. This book helps us consider ways we sometimes miss valuable insights because of widespread cultural blind spots.

In Reading Romans with Eastern Eyes, Jackson demonstrates how paying attention to East Asian culture provides a helpful lens for interpreting Paul’s most complex letter. When read this way, we see how honor and shame shape so much of Paul’s message and mission.

1. How to Read with Eastern Eyes

Interviews about the Book

“Reading Romans with Eastern Eyes introduces Western readers to Eastern cultural concepts (particularly the honor-shame dynamic and the matrix of social expectations and behaviors related to it) and demonstrates how these concepts play a major role in Paul’s letter to the church in Rome. This is a sophisticated exercise in cultural analysis for the sake of better understanding the Bible, and it should serve as a methodological primer for and a prime example of such an approach for the foreseeable future.”

—Matthew Emerson, executive director, Center for Baptist Renewal, author of The Story of Scripture: An Introduction to Biblical Theology

“In this culturally sensitive and theologically insightful reading of Romans, Jackson W. invites us to consider the East Asian notion of ‘face’ as a key for unlocking the significance of the themes of honor and shame in Paul’s epistle to the Romans. Through this contemporary conceptual analog, the author is able to guide the reader through the relational world that Paul took for granted and to illuminate how social capital affects various dimensions of this most important letter. Well researched and yet accessibly written, Reading Romans with Eastern Eyes is a useful and reliable resource for anyone interested in journeying into Romans by way of a culture closer to the apostle’s own than that shared by many of us in the West today.”

“Jackson W. provides Western readers, indeed global readers, with a thoughtful, carefully documented Eastern perspective on Paul’s epistle to the Romans. Arguing that Asian and Middle Eastern cultures share similarities in worldview, he brings us new vistas and nuances to this wonderful epistle. While he does not challenge Western thinking, he does challenge us to see more than that. In doing so, his thoughts will certainly provide for vigorous but necessary and long-overdue discourse. I found it a refreshing and insightful read.”

“Jackson W.’s work Reading Romans with Eastern Eyes provides a long-overdue contribution to Pauline theology and biblical studies. Blending the first century cultural dynamics of honor and shame, patronage, and collectivism alongside traditional understandings of the book of Romans, Jackson unpacks the importance of a comprehensive interpretation of this fundamental book of the faith. He brings a sensitivity to the many issues that strikes at the heart of the global majority while highlighting the latest in New Testament studies. This is an indispensable read for any pastor, scholar, or Christian who desires to have a deeper grasp of the apostle Paul’s magnum opus.”

“Drawing from his personal experience and combining insight and principles from diverse disciplines (not just biblical theology), Jackson W. has written another practical book that will reorient the way we read the letter to the Romans. There aren’t enough resources written that take into consideration the cultural nuances and implications that aren’t immediately evident, but this book does exactly that. Hence, this book isn’t just another Bible study or hermeneutics resource but a key reference if we are to fully grasp the message of the epistle. While Jackson deals specifically with Romans here, I believe it will help and inspire us to begin reading the rest of Scripture with the same cultural awareness and intelligence. This is a must-read for everyone—not just crosscultural workers!”

—I’Ching Thomas, author of Jesus: The Path to Human Flourishing: The Gospel for the Cultural Chinese

“Jackson W. has gifted us with a fresh and delightfully insightful reading of Romans. Because his Eastern perspective shares much in common with that of Paul’s first-century world, the book offers many aha moments for Western Christians. Over and over, issues such as honor and shame, collective identity, and ancestral authority shed significant light on the text, at times challenging traditional readings. What’s more, this highly readable book teems with applications that speak to the church today. I strongly commend it to students, teachers, and pastors.”

“I have been looking forward to this book for two reasons. First, Jackson is an expert. He was born and raised a Westerner but has spent most of his adult life in the East. He is fluent in an Eastern language, is deeply immersed in an Eastern culture, has been studying Eastern worldviews for decades, and has a keen interest in how modern Eastern Christians interpret the Bible. He understands the kinds of questions Westerners have, the ways that Westerners misread Scripture, and importantly, when and how a more Eastern perspective can help me.Second, before opening the book, I knew Reading Romans with Eastern Eyes would upset my twentieth-century Western method of reading Romans. The ‘Roman road’ makes perfectly logical sense to me. All the dots in Romans connected comfortably for me. Romans was neat, simple, and clean. The problem is that Paul ended up looking a lot—a whole lot—like me. Instead of me imitating Paul, like I am supposed to (1 Cor 4:16), Paul imitated me. I suspect I had created a Paul in my own image. No wonder I liked and understood Romans so well! Jackson is helping Westerners like me (and probably you) see how we might misread Romans
because of our own cultural lenses.”

—From the foreword by E. Randolph Richards, provost of Palm Beach Atlantic University, author of Misreading Scripture with Western Eyes

“The epistle to the Romans stands for Paul’s efforts in reaching out to communities in Rome, a city epitomized by the ideology of law and justice. That explains the reason why the epistle appears to be dominated by the theme of law and guilt. However, Paul, a former Pharisee, was indoctrinated and saturated with an Eastern heritage—namely, the Jewish culture. Furthermore, the community to which Paul was addressing consisted mainly of diaspora Jews, a group of easterners sojourning in a western city. Hence, the epistle to the Romans was like an archeological site loaded with multiple layers of cultures. In this book, Jackson W. digs deeper into the cultural roots of this epistle. The lens through which he reinterprets should be considered legitimate and ought to be taken seriously. As a theologian trained in the West, Jackson—just like Paul—makes all efforts of rendering the gospel relevant to the honor-shame type of Asian cultures. By doing this, he restores the original cultural nuances of both the author and the audiences of this powerful text.”

“How can I follow Jesus without forsaking my parents, my people, and my country? This question concerns everyone from the Californian surfer dude to the Harvard humanities professor. Reading Romans with Eastern Eyes is an impressive book that goes a long way in answering these universal questions. Jackson W. uses shame and honor to give us a far richer understanding of the message of Romans.”

“Brilliantly presented! Jackson W. masterfully retraces Paul’s use of the Tanakh, the prevailing worldview of honor and shame, and subverts our settled view of Romans. With crystalline prose and energetic bursts of insight, this scholarly work with modern-day relevancy is highly recommended.”

“Honor and shame were at the heart of first-century Roman sociopolitical categories and remain the bedrock of social categories in many parts of East Asian countries today. Yet honor and shame are elusive to most Christians and biblical scholars in the West. As such, they are typically overlooked or, at most, undervalued as important substrata of Paul’s letters, especially his letter to the Romans. In this book, Reading Romans with Eastern Eyes, Jackson W. has gifted those of us in the West with firsthand insight into this important Pauline motif, in a way that makes the entire letter take on new characteristics. Perhaps most importantly, Jackson challenges scholars to read beyond discussions of apocalyptic, covenantal, participationist, or forensic categories and to see the ways in which filial and divine honor are at the heart of every section of the letter. It is an excellent study and a must-read for every interpreter of Romans in the West today.”

—Haley Goranson Jacob, assistant professor of theology at Whitworth University, author of Conformed to the Image of His Son
Copyright 2008-2020, Patheos. All rights reserved.