A snapshot of the religion vote

My friends at PRRI have a helpful snapshot of the religion vote 2-3 weeks before the election. Their fine work helpfully illuminates the state of the race and also reveals major drawbacks in how pollsters define religious categories.

White evangelical Protestants remain solidly for Trump. Though, as I an others have noted, when you identify “evangelicals” by actual evangelical beliefs and not just by denomination or self-ID, the picture is a lot more nuanced.

White Catholics break much like white mainline Protestants — again, because this demographic has a lot of old people and because nonwhites are not taken into account. These numbers actually look pretty decent for Trump — not as good as what Romney pulled, but better than what we saw in surveys this summer when Trump’s white Catholic numbers were shockingly low.

Adherents to non-Christian faiths and the religiously unaffiliated break decidedly for Clinton. Black Protestants support Clinton at or better than expected levels. Hispanic Catholics are decidedly anti-Trump, but we cannot infer much from the surveys aggregated into the PRRI chart due to sample size issues.

While plenty of observers are looking for evidence that religiosity could be a game changer in the 2016 election, it looks like religious voters who usually vote Republican are going to vote Republican and those who usually vote Democratic are going to vote Democratic. People who think theology matters to political behavior will be disappointed at how little religion seems to matter in presidential vote choice, even in this cycle with its extreme polarization and contemptible distractions.

If you want to explain vote choice, you are largely telling a story about demographic indicators like race, income, and educational attainment. God doesn’t have as much to do with it as religion-and-politics experts want you to believe. 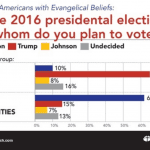 October 26, 2016
Consider this: Only 45% of U.S. evangelicals actually support Trump
Next Post 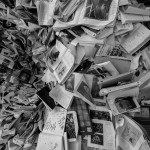 October 30, 2016 Stop sharing fake news and internet garbage
Recent Comments
0 | Leave a Comment
"Simple. His politics served Evangelical ends better than Hillary's did. The logical fallacy being projected ..."
Scot McKay Trump’s stunning admission about his evangelical ..."
"Your use of the term "homosexual" to refer to gay people, which is as offensive ..."
Self-Evident Truth Why opposing same sex marriage isn’t ..."
"i think it's a what we call "far right" in general thing and i think ..."
Brandon Roberts Why are white conservative Christians so ..."
"i personally feel people that it's bisexual with a different name however i also see ..."
Brandon Roberts Is fluid sexuality a Millennial thing?
Browse Our Archives
Related posts from Capitol and Cathedral